Crime Month has an Appointment with Danger 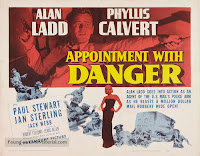 This blog is supposed to focus on clergy and churches, but sometimes we get distracted.
1951’s Appointment with Danger, part procedural and part salute to the Postal Service, presents an amazing piece of casting. The inciting incident of the film is the murder of a postal inspector, Harry Gruber, by two seedy criminals, Joe Regas and George Soderquist. Joe is played by Jack Webb and George is played by Harry Morgan. TV Land fans will recognize the stars of the 1967 revival of Dragnet, a show that followed two straight-laced Los Angeles police detectives. To see “Friday” and “Gannon” as thugs is rather jarring.

This bit of casting is even more interesting because Appointment with Danger's format is quite similar to the films and TV shows that Jack Webb made as a producer, writer, and director. (In addition, Dragnet's first incarnation -- as a radio drama -- also first appeared in 1951.) This film, like much of Webb’s work, provides a rather hagiographic presentation of law enforcement -- in this case, the United States Postal Inspection Service.

The film opens with a narrator lauding the glories of the United State Postal Service (“the biggest business in the world”). It is noted that Americans use the mail “for business, for pleasure, and sometimes to address that busy man at the North Pole” (Yup, it's a nod to Miracle on 34th Street, a film with a similar reverence for mail carriers) and then salutes “your mailman who visits you a dozen times a week.” And then the announcer introduces the real heroes of the film: “behind this army[of postal carriers] is a special army of trained men, the oldest police force, Postal Inspectors.”

The narrator then gets to the action. “Our story begins in Gary, Indiana.” It is there that we meet Joe and George, who -- after murdering Gruber -- together drag the body outside to their car. George notices a nun standing in an alley. She's having trouble opening her umbrella, and George (demonstrating exemplary manners for a murderer) goes to help her. He explains that he and Joe are carrying a friend who has “had too much to drink.”

Unfortunately for Joe and George, that nun, on a short layover on a train trip, lets a street cop know about the odd incident. That report eventually finds its way to the postal inspectors investigating Gruber’s murder.

The lead inspector on the case, Al Goddard (Alan Ladd), is assigned the task of finding the nun (His boss asks him, “What about the nun? How many nuns are there anyway?” Goddard  responds, "I don’t know, I’ve never counted them.”) 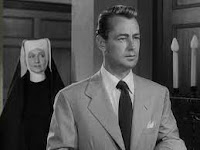 Al's partner says he's a cynical guy. "You’ve been chasing hoodlums for so long you don’t like anyone.”
Al responds, “We’re all working for ourselves, everyone’s a pitch artist.”
His partner tells him, “You’re a good cop, Al, that’s about all you are.”

If you know movies, you know Al’s cynical view of life will be challenged by his witness, Sister Augustine (Phyllis Calvert). Al tracks her down and interrogates her about what she saw. She tells him,“I got off the train to get Sister Gertrude some medicine.” It was then she saw Joe and George with Gruber’s body.

Al tells her she might have to go to court to testify, but the nun balks at leaving the convent, “I don’t think so, I have classes to teach.”

Al responds, “It’s the devil’s work to let someone else do your job.” Sister Augustine acknowledges the wisdom of that statement and asks who said it first.
Al tells her it’s from the writings of Martin Luther.
“His early writings, I imagine,” the sister responds.

She goes to the police station and identifies George in a book of mug shots. Al tells her she will need to go to Gary, Indiana, to testify in court.
Sister Augustine expresses sympathy for the man and asks about his likely fate.
“He’ll get a trial and everything the law allows,” Al tells her.
“But not a drop of charity.”
When Al doubts George deserves charity, the sister tells him, “I don’t think you have a heart.”
Al answers, “When a cop dies, he doesn’t die of heart failure. It’s a charlie horse to the chest.” 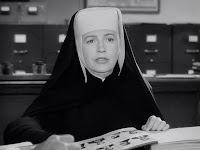 Eventually, Joe learns that the nun has identified George, so he kills George and makes an attempt on Sister Augustine’s life (he pushes bricks off a scaffolding down on her, but misses). Joe's boss, Earl (Paul Stewart), asks Joe how the nun survived, and Joe tells him, “She got lucky.”
Earl tells him, “I’m glad. This murder is bad business.” He tells Joe to forget about the nun. Joe can’t.

Al does get Sister Augustine to agree to go to a different convent where he can provide better protection. Al finds her at the new school teaching the kids baseball. He asks how she likes working with the new group of children, and she replies, “They’re lovely children, but the little boys are very badly trained in baseball. We’ve sent three boys to the major leagues, but they’ve only sent one. And it was to the Cleveland Browns.”

Al decides on a new strategy to catch the crooks which he believes will keep Sister Augustine safer. He pretends to be a crooked cop willing to help the thieves rob a postal truck carrying a million-dollar shipment.

He says goodbye to the nun. She says she’ll keep him in her prayers.

But the robbery doesn’t go smoothly, and Joe abducts Sister Augustine for protection. When the gang gathers, the sister acknowledges Al -- so the crooks know that Al isn’t crooked.
Al pleads for the nun’s life. “Earl, I know you don’t believe in hell. It’s a bad time to bet against it.”
Earl tells Sister Augustine that he’ll let her go if she gives her word that she won’t rat them out. She responds, “I can’t give my word about that.” She wouldn’t lie to the authorities any more than she’d lie to Earl.

To protect her, Al begins a fight with Joe, just as the police arrive at the scene. In a shootout, all the members of the gang are killed, but the cop and the nun survive.

Al asks someone to take Sister Augustine to her train so she can return to her home convent. Noticing his affection for the nun, Al’s partner says to him, “You know Al, if you work real hard, someday you may qualify for the human race.”
And Al tells him, “I may join it at that.”

Though all the Jack Webb lore is interesting, we really need to get down to the business of giving Sister Augustine a Steeple Rating. Though there are times in the film when the good nun seems a little dim, her faith, integrity, and compassion overcome that to earn her our highest rating of Four Steeples.
Posted by churchandstates at 6:54 PM