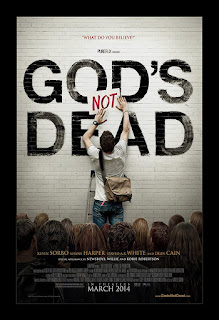 (Originally posted at Dean and Mindy Go to Church in 2015.)

2014 was a banner year for Christian and Biblically themed films. Most impressive were the films made by independent Christian producers that earned sizable amounts of money. One would think such films would certainly get the details of church right. One would be sadly disappointed.

God's Not Dead stood out as one of the show business wonders of the year. On a budget of $2 million, it took in $62 million, not a bad return on an investment. I like the premise of the film, the conflict between a Christian student, Josh, and a professor with an aggressive atheist agenda. The religious liberty issues on campuses are real and could provide an interesting story. But this movie deals with these issues in the most ham-handed way possible, with Kevin Sorbo (TV's Hercules) playing the professor with Simon Legree subtlety.

But once again, the focus here is to look at the church in the film. And this film does have a church, with a pastor and stained glass and all. As is often the case in such films, the name of the church and its denomination is difficult to discover. There are clear shots of the exterior of the church, but no signage is visible. In fact, one object that looks like it should be a sign in front of the church is bricked over. But a sharp eye will spot parking spaces marked "St. James." 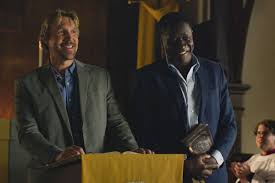 Since we see no sign for the church, we don't see the denomination, and no one mentions it. But Pastor Dave wears a clerical collar, and the interior trimmings appear to be high church. Since we never see a worship scene in the film, it's even more difficult to know.

It's also puzzling what Pastor Dave does with his time. We do see him advise Josh when the young man visits the empty sanctuary. Pastor Dave sees Josh sitting in a pew and asks if he's waiting for someone. "Seems he's out for the moment," Josh replies. "Maybe that's why he sent me," Pastor Dave responds.

Josh presents his dilemma: should he stand up for Christ in the atheist's class? Pastor Dave tells Josh to read Matthew 10: 32 & 33 ("whoever acknowledges me before men, I will acknowledge") and Luke 12:48 ("everyone who is given much, much will be demanded"). Then he leaves Josh, without taking time to pray with him. He does text him shortly after that, but doesn't, apparently, follow up again.

Much of the time we spend with Pastor Dave is time spent with the Rev. Jude visiting from Senegal. The two make many attempts to drive to Disneyworld. When Dave's car won't start, they try to rent a car. But not a single rental car brought to them works. (They live in an amazing place where, when renting a car, you don't have to present a credit card or driver's license.) They make no effort to get Dave's car repaired until they pray for it at a crucial moment toward the end of the film.

And a person does! A woman calls Pastor Dave to meet her for lunch to discuss her problems with her boyfriend (her boyfriend is none other than the atheist professor). A little clergy pro tip, though nothing scandalous comes of it in the film, it really is best not to meet someone of the opposite sex you don't know well in a restaurant to discuss romantic relationships. This has often led to not good things. 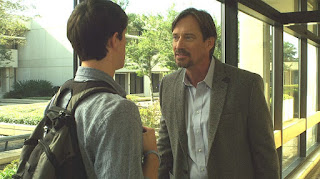 We also see Pastor Dave meet with a young woman whose Muslim father tried to beat her when he discovers she had become a Christian. He encourages her to be strong, but perhaps he should also have called the police.

But back to that crucial moment when the car finally starts. Pastor Dave and Rev. Jude start on their way to Disneyworld but get caught in the traffic for the big Newsboys concert in town. And wouldn't you know it? They come across Professor Hercules who has been hit by a car. A quick visual exam by Rev. Jude shows them that the Prof is dying, so instead of calling 911, Pastor Dave shares the gospel with the man bleeding out on the street.

The adamant atheist trusts in Christ, and then kicks the bucket. Rev. Jude assures Pastor Dave that though there is sorrow now, there is celebrating in Heaven. Pastor Dave really hadn't seemed too upset. It looks like they're about to high five for the conversion over the dead body. I'm cool with praying with the dying, but it seems that they might be concerned about whether the man left behind a widow and/or orphans.

So, as the more perceptive reader may have guessed; St. James with Pastor Dave doesn't get a thumbs up in our movie church rating system. It's a pretty strict system.


Posted by churchandstates at 9:03 PM