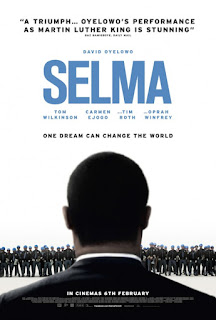 (This post was written during the Oscar race of 2015 before this blog existed and I was writing about movies at the Dean and Mindy Go To Church blog. Last week was the 55th anniversary of the Selma march.)

There are a couple of big controversies swirling around the Best Picture Nominee, Selma.

There are some critics questioning the historical accuracy of the film's depiction of President Lyndon Johnson as an opponent to Martin Luther King's work and plans. Others are concerned that the film was snubbed by the Academy, for though it was nominated for Best Picture (and Best Song written by John Legend), it wasn't nominated for director, screenplay or any acting categories. Fortunately, for our purposes here, I don't have to comment on either of this brew-ha-has. We're just here to look at the church and the clergy in the film.

The film opens with King talking with his wife Coretta talking about a different kind of dream. He says that someday he'd like to pastor a small church, and Coretta can work to put food on the table. We soon see that he is preparing to receive the Nobel Peace Prize for his civil rights work with the Southern Christian Leadership Conference. The scene has a sense of melancholy because the couple knows they will never have a quiet life alone.

The scene is also a reminder that King saw himself primarily as a minister of the Gospel. Recently, I saw a newscast in which they kept referring to the Reverend Dr. Martin Luther King, Jr., as "Dr. King." In another scene in the film, King greets another member of the SCLC as "Doctor" and is greeting as "Doctor" in return, both joking and sardonic. It's clear that's not the way he thinks about himself. 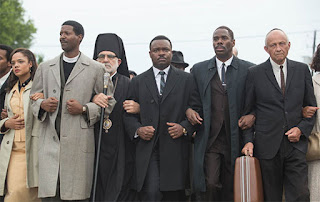 It does make one wonder what kind of pastor King would have been at this stage in his life. Of course, his leadership skills would provide the direction and vision that would shoot him to the top of the pastoral search committee's list. His speaking abilities would keep the most lethargic of congregations awake and perhaps taking notes. But the film doesn't gloss over King's marital sins. A pastor who is unfaithful in his marriage should not keep his position. God used King in mighty ways, but in this one way, he wasn't a faithful pastor.

The film depicts various churches. The first church we see is the 16th Street Baptist Church. We see it for moments, before a bomb destroys it, killing four little girls. The tragic death of those girls, like the deaths of many Christian martyrs before them and since, spurred many to action, to bring justice for the despicable treatment of African Americans at that time.

I was, frankly, a little torn by the depiction of some of the churches in the film. I'm not comfortable with churches promoting a political agenda. During the last Presidential election, I was in a church where the pastor suggested looking at a flyer that, without mentioning names or party affiliation, made clear the "godly" way to vote. Though I agreed with the political position, I didn't agree with it being associated with the Gospel.

And the first time we see King speaking in a church in the film, he is asking the congregation to fight for the right to vote. He is not using any particular passage of Scripture to justify his arguments. I might be uncomfortable today if I was in a church today and someone was proposing, say, starting to a petition to get a proposition on the ballot for even the best of causes. But at that time, the injustice perpetrated against African Americans violated Biblical values. The church was the one place blacks could meet and organize without being harassed by the authorities. (I found it interesting that when police officers tell marchers to cease and desist, they are told to return to "return to your homes or churches.") 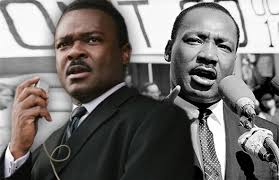 The next time we see King speak in a church, it's a funeral. One of the black activists is attacked by a state trooper and killed. King blames government officials for the man's death, but he also says that white preachers who don't speak out against the injustice perpetrated against African Americans are also culpable. During this time in history, many churches were shirking their God-given responsibility to call for God's justice. But many preachers, of various racial backgrounds, did speak out for justice. King called white clergymen to come to march in Selma, and many did.

Today, there are many causes where justice is at stake. Such issues as abortion, gay marriage, Palestine, slavery, economic inequities, and many others certainly call out to be addressed by the Word of God. But the difficult thing is that Christians who seek to serve the Lord faithfully don't agree on how justice can best be served.

We must trust in the God of grace, Who led the Israelites out of Egypt, Who was with those marchers in Selma, can continue to lead us today -- but perhaps not all on the same march.

Posted by churchandstates at 9:03 PM