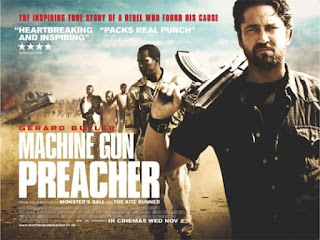 (This post was originally posted in our blog Dean and Mindy Go To Church five years ago.)

The name Machine Gun Preacher really sells the title character short. He's not just a machine gun preacher, he's a rocket launcher preacher as well. He's also a real person, Sam Childers. But as per usual for this space, we are here to look at the churches and clergy in this film.

Upon release from prison (and before he became the machine gun preacher), Sam Childers (Gerard Butler) returned his life of drugs, larceny and depravity, and to his wife, Lynn (Michelle Monaghan) a woman who had left her life as a stripper and became a Christian.

Following a harrowing carjacking experience, Childers joins his wife at the church she attends. He worries whether he will be welcome at church saying, "I don't got any new shoes." His wife assures him, "God doesn't care about your shoes." 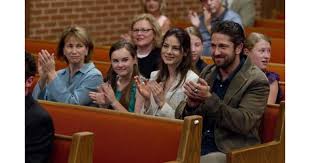 I never caught the name of the church, but according to Wikipedia, the church was Assemblies of God. The interior of the church has a balcony, pews and a large cross in front; it looks like it might have looked during the depression era. Traditional songs are sung ("Glory to His Name," "Amazing Grace") but with enthusiasm. The minister preaches Jesus and salvation through his blood. At the conclusion of his sermon, the minister calls for those who want to trust in Christ for the forgiveness of sins and salvation to raise their hands and stand up.

Sam raises his hand and is brought forward for baptism. Most churches I've been a part of having some kind of class along with an opportunity to give a testimony to the pastor and church leadership before baptism. In this church as soon as someone trusts in Christ, they're dunked--which I have to admit is quite Biblical.

After Childers has been attending the church for a time, he hears a missionary from Uganda speak at the church. His tales of suffering, particularly of children, in the nation, touch Childers. I've been to a lot of churches where the pastors are quite possessive of their pulpits and are unwilling to give missionaries more than the "Missions Minute" (which is really supposed to be five minutes but often becomes ten to fifteen). But the missionary has enough time to convince Sam he should go to Africa.

After Sam goes to Africa, he claims that God has given him a vision: to build an orphanage in Africa and a church in the states. The church Sam says he wants to build will be different from "Faith United or Calvary Fellowship" and "won't turn away sinners, drug addicts, and prostitutes." This is rather confusing because the church he's been attending was apparently quite welcoming to his wife Lynn, who was a stripper and welcoming to him, a biker and addict. If he had said something like a church which will have a special ministry to reach out to such people; well okay then, but he seems awfully harsh talking about the church where he found grace.

The church Childers founds, Shekinah Fellowship Church has its first meeting while the building is still under construction. Their worship band plays lively choruses. When the guest speaker doesn't show, Childers reluctantly speaks himself. He gives his testimony without any direct reference to Scripture.

Childers takes on the preaching duties in the church, though he doesn't have training. More importantly, he doesn't meet the qualifications of a leader given by Paul in I Timothy 3. Verse 6 says an overseer "shouldn't be a new convert or he may become conceited and fall under the same judgment as the devil." It turns out Childers eventually struggles with his faith and becomes a quite awful preacher.

What Childers does much better is establish a ministry to orphans in a warzone. He divides his time between work in the Sudan and Pennsylvania. In Africa, he finds himself at war with the LRA, an organization that kills parents and recruits young boys as soldiers. He fights back using the firearms knowledge and skills from his criminal life. A relief worker questions Childers' use of violence. Childers responds, "If it was your child, you would be happy to have me use any means necessary to get your child back."

Childers made me think of the building of the Temple in Israel. David, "the man after God's own heart," was not allowed to build the Temple because he was a man of war. This was true even though God had called David to fight Goliath and the Philistines. I think Sam Childers may well be called by God to fight for the orphans but it may be what keeps him from being a qualified pastor.