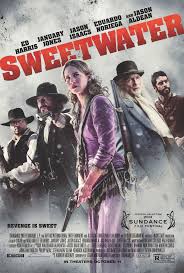 (The following post was written five years ago in and posted in the blog Dean and Mindy Go To Church. At that time we were not using Steeple ratings, but neither of these pastors would have done well in the Steeple rating system.)

If you have any desire to see either of these Westerns, be aware that by necessity this review has huge spoilers. So read no further if you wish to be surprised by the plot twists of these films.

To start with, both of the church pastors in these films commit multiple homicides. Certainly for most people that fact alone would dissuade them from attending either church. But the fact that these pastors are homicidal is but one factor of many to be learned about these churches. We'll examine the church in Sweetwater first.

The film opens with "Prophet" Josiah (Jason Isaacs) finding a couple of trespassers on his land in territorial New Mexico. The two starving men have killed a couple of the pastor's sheep. The clergyman knifes one man and has his underling gun down the other. Now aside from the murder, which we already mentioned is a bad thing, this incident shows a lack of concern in the church for the alien, the poor, and the hungry. That's not biblical.

January Jones, of Mad Men fame, known for her beauty and superb acting (well, one of those) plays a former prostitute trying to make a new start as a wife and farmer. Josiah kills her husband and rapes her. Again, aside from the murder, the "prophet" is not being faithful to his three wives or the prostitutes he frequents. Again, this misogyny is not biblical.

We hear Josiah berate Mexicans and Blacks as a curse on the White Race; nope, not biblical.

When Jones and Marshall Ed Harris attack Josiah's church, Josiah uses his congregation members as shields to protect himself. The shepherd is supposed to be willing to lay down his life for his sheep. Again, not biblical behavior.

Finally, the film does give an example of Josiah's preaching. He doesn't use Scripture, but rather prophecies he received from an angel (Angel Frank or Marvin or Bob or something). I do believe he was a false prophet. And they don't seem to have much of a music program.

This is not a church I'd want to go to. 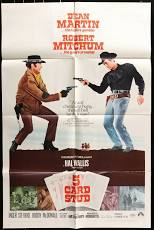 It takes longer for the audience and especially the characters in 5 Card Stud to figure out that the Rev. Jonathan Rudd (Robert Mitchum) is a killer. Until that happens, he's not doing too bad of a job planting the church.

When the Reverend comes into town, he walks into a saloon and fires a couple of bullets from his Colt .45 into the floor. He invites everyone to come the next Sunday to the church, "God's House." (The sign in front of the church reads, "God's House - Caretaker: Rev. Rudd") One of the men in the bar says, "You don't want me in your church. I'm the meanest, orneriest S.O.B. you ever come across." Rudd responds, "Jesus found room for Judas at the table, so I think we can make room for you in a pew."

The next Sunday, the church is full. This firearms-in-a-bar technique of marketing probably needs further investigation. The reverend's preaching is of the hellfire variety, but since the condemnation is of a lynching committed quite recently, the harsh tone is more than justified.

Throughout the film, the preacher shows a certain proficiency with Scripture. (Though his interpretation of "'Vengeance is mine,' says the Lord" is certainly lacking) The hymn singing in the church is spirited.

The reverend also has a nice way of dealing with stereotypes of ministers. When someone asks what a minister is doing with a gun, he responds, "When a man dons the cloth, he doesn't stop being a man."

There are a lot of things about the Rev. Rudd I very much like. I would certainly consider going to his church if he wasn't a murderer -- which I'm afraid really is a deal-breaker.

Posted by churchandstates at 9:55 PM