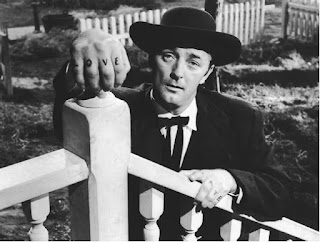 It could be argued that no single actor lowered of image of clergy in the cinema more substantially than Robert Mitchum. During the first decades of cinema in the sound era priests were represented as being kindly and wise, played by the likes of Bing Crosby, Pat O’Brien, and Barry Fitzgerald. These men raised funds for the poor (or at least the building fund), offered sage advice, and made a difference in the lives of troubled youths.

With one performance, as the homicidal preacher Harry Powell, Mitchum changed the perception that a clergyman in a film was someone the audience could trust to do the right thing. He might instead be the person who will do the very worst thing. 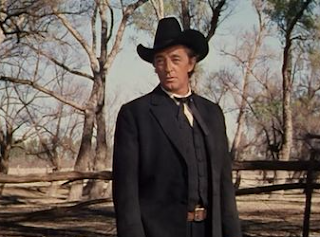 You might remember reading a post about that film, Night of the Hunter, during a month of Halloween horror films. Mitchum again played a murderous pastor in Five Card Stud, a Movie Churches post from before there was a Movie Churches blog.

From these two films, one might get the impression that ministry and killing always go hand in hand. Fortunately, this isn’t the case in all of Robert Mitchum’s filmography, so we’ll be looking at clergy and churches in Robert Mitchum films to see if there are more pleasant ecclesiastical outcomes. (Spoiler, Deborah Kerr, as a nun in Heaven Knows, Mr. Allison, doesn’t go on a deadly killing spree. She’s rather nice, in fact.) Look for a new Mitchum Movie Church every Friday this month.
Posted by churchandstates at 7:23 PM