Some of the best cinematic love stories do not end happily. In Casablanca, Rick and Ilsa part for the good of the free world. In Brief Encounter, wedding vows are honored. Romeo and Juliet have bummed movie audiences for decades (and live audiences for centuries) Heaven Knows, Mr. Allison (1957), directed by the great John Huston, has a different obstacle to romance: God. 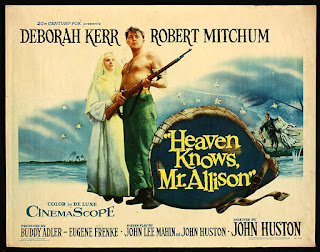 with those suicides. (Sorry for all the spoilers.)

During World War II, Marine Corporal Allison (Robert Mitchum) is stranded on a raft in the South Pacific and washes up on the shore of an island populated only by one woman, a nun. The Japanese have evacuated the island, but Sister Angela (Deborah Kerr) stayed behind to care for a dying priest.

By the time Corporal Allison arrives, the priest is buried under a cross on the island. Allison asks, “You’re alone?”

She responds, “God has been with me.” She tells him, “Thank God you were spared, Mr. Allison.”

As Allison rests, Sister Angela lights candles in the chapel and says her prayers; when Allison gets up, he puts out the candles, afraid they’ll be seen by the Japanese. The Japanese do eventually come back, causing Angela and Allison to take refuge in a cave on the island.

As they spend time together, Allison begins to fall in love with Sister Angela, but the result isn’t what you might expect. Instead, Allison and Angela respect each other’s allegiances. Allison tells Sister Angela, “I’m a marine all through me. You got your cross, I got my globe and anchor. Me, I got the Corps like you got the church.” 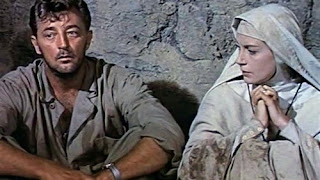 She talks about her training, “You ought to know my D.I. (Drill Instructor), Mother Bridget. We called her the Holy Terror.”

As they spend more time together, Allison finds himself falling for the sister. He asks, “Supposing a nun should change her mind, could she get out?” She asks if he means desertion from her call.

“They wouldn’t shoot you,” he responds.

But she tells him, “You could lose your immortal soul.” But she admits, “I was to have taken my final vows next month.” 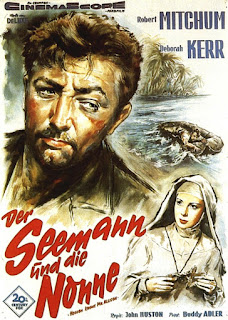 “You could still pull out?” he asks. He begs her not to go through with her final vows. He pleads, “I’ve never loved anything or anyone before. That’s why I’d like to ask you to marry me. I couldn’t keep from saying it, ma’am. So tell me if there’s a chance.”

She breaks the hard news to Allison, “No, I’ve already given my heart to Christ our Lord. Here’s the ring. When I make my final vows, it will be a gold ring.”

But later, when Allison has too much saki while they hide in the cave, he persists, “If you had to be a nun, why couldn’t you be old and ugly? Why did you have to have blue eyes and big, beautiful eyes. We’re like Adam and Eve.”

Sister Angela runs from the cave, into the cold night. She gets sick, and Allison has to care for her. As she recovers, he apologizes for his words and behavior.

With Japanese on the island, Marine Corporal Allison looks for a chance to attack them. He believes God is talking to him, telling him to go after their base.

The nun asks, “Are you sure it’s God speaking, not your natural desire to take part in the fighting?”

He responds, “Pretty sure, ma’am.”

She says, “Then He’ll protect you,” but she still prays, “Dear God, Mr. Allison is not of the church, he’s only a Marine. If his time has come, I ask you to be merciful when he comes into your presence.”

After a battle, the U.S. Navy comes to their rescue. Angela and Allison will go separately to their lives, and he says, “Very pleased to meet you, ma’am. It has been a pleasure.”

She responds, “Mr. Allison, even if we are many miles apart, you will be my dear companion always.” But not lover or husband. They part as friends, nothing more. But it is a lot.

A modern telling of the tale might tempt the filmmaker to show more in the relationship. I’m glad that Huston was satisfied with making Mr. Allison and Sister Angela stay true to their callings. We're giving Sister Angela 4 Steeples.

Posted by churchandstates at 8:06 AM