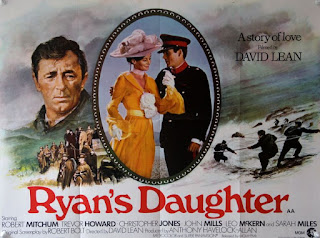 David Lean was one of the greatest filmmakers, and he made two kinds of films very well. At the beginning of his career he made small, intimate stories, adaptations of the works of great writers such as Noel Coward (Blithe Spirit, Brief Encounter) and Charles Dickens (Great Expectations, Oliver Twist). In the second half of his career, he made epics telling great historical stories like The Bridge Over the River Kwai (World War II), Lawrence of Arabia (World War I), and Doctor Zhivago (the Russian Revolution).

Ryan’s Daughter is an odd chapter in his career. It tells a small, intimate story in an epic fashion. When the film premiered in 1970, the roadshow edition (in 70mm with a prelude and intermission) was 206 minutes long and was sold as an epic. But really, when you get down to it, it’s a tawdry, little love triangle set in Ireland not long after the Easter Rising (an armed insurrection in Ireland against the British).

Critics widely considered the film a disappointment after Best Picture winners like Kwai and Lawrence; though it was profitable, it wasn’t as huge a hit as, say, Dr. Zhivago. Still, we’re not here to evaluate the film, we’re here to look at the clergy and churches in it. And this film, set in a small Irish town, does have a priest. And since it’s Robert Mitchum month, the actor has the lead performance as a school teacher and cuckolded husband.

The role of the priest in the film, Father Collins, was written for Alec Guinness, but Guinness turned down the role because of his recent conversion to Roman Catholicism. He felt the role was not an accurate portrayal of his new faith, so he said no. Instead, Trevor Howard plays the priest.

Father Collins serves as the moral authority of Kirrary, an Irish country town, in 1917. When villagers taunt and mock Michael, the "village idiot” (John Mills in an Oscar winning performance), the priest shames them for picking on the weak. He rather violently pulls a couple of men away from Michael by their ears.

The priest not only tries to protect Michael, he tries to teach him as well. When Father Collins finds Michael on the beach, tearing the leg off a live lobster, Collins says, “I’ve told you Michael, they’re God’s creatures.”

The priest seems to have a relationship with everyone in the town and everyone that comes to town. He is brought into the school to lead the children in prayer. He gets along with the gun runners struggling in the cause of Irish independence and seems sympathetic to their cause -- if not their methods. He also treats the British soldiers who occupy the town with respect.

But I haven’t mentioned the central character, the title character of the film, Ryan’s daughter, Rosy (Sarah Miles). The priest’s relationship with her is one of the most interesting in the film, and it’s difficult. Rosy is intelligent and curious and quite obviously wants more from life than her little town has to offer. Father Collins finds her on the beach and reprimands her, “What do you do, Rose, mooning around all day by yourself?” She tells him she’s not doing anything, and he responds, “Your nothing’s a dangerous occupation.”

The priest sees only one option for the young woman: to find a husband. He tells Thomas Ryan, Rose’s father, “You’ll ruin that girl. She needs a house enough of her own. A fella of her own.” Collins takes time alone with Rose to teach her about marriage as a Sacrament, for the “procreation of children and bring them up as good Catholics.” 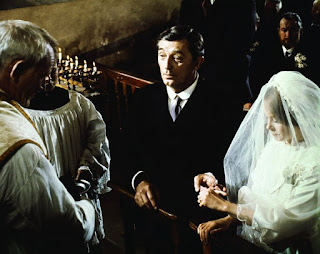 Rose is a virgin and fearful of sex. He tells her, “don’t be scared of the satisfaction of the flesh, though that not a gate I’ve been through.”

Rose does find a husband, Charles Shaughnessy, the village school teacher (as mentioned before, played by man-of-the-month Mitchum). Charles is the only person in town who seems to have traveled (at least as far as Dublin) and who has broad interests (such as in German composers, like Beethoven, a dangerous area of study during World War I). The teacher is many years older than Rose, but Father Collins is quite supportive of the match.

Father Collins: You’ve got a good man? Enough money? Your health? There’s nothing more, you graceless girl.
Rose: There must be more.
Father Collins slaps Rose, knocking her to the sand
Collins: Don’t nurse your wishes. You can’t help having them, but don’t nurse them or sure to God you’ll have what you’re wishing for.

Nonetheless, Rose continues not only to nurse her dreams, but she begins an affair with a British soldier, Major Randolph Doryan, whose leg was maimed in the war. His injury sent him away from the German front and to Ireland. They meet secretly on the beach, but Michael sees them and lets the secret out in the village.

The people of the village hate the British and are disgusted and outraged with Rose. A mob attacks her, ripping off her clothes. Once again Father Collins intervenes. He protects Rose from the crowd, punching one of her attackers. The man says, “You’re taking advantage of your cloth, Father!”

Rose’s affair with the soldier ends. Charles and Rose decide to leave the village, thinking of separating. Father Collins urges them to stay together, and as the film ends they seem to be considering his advice.

There is so much good in Father Collins’ work in the village, but he does “take advantage of the cloth,” resorting to violence and other heavy handed methods. Surely there would be a better counselor for Rose than he. In our times, he perhaps would, and certainly should, be removed from ministry for hitting a parishioner.

Many might think priests have little wisdom to offer in the area of marriage and romance, but they do have the wisdom of Scripture and the tradition of the Church to draw from. Still, it is understandable for people to look for a more relatable counselor.

Collins does the best he can, showing more grace and compassion than almost anyone else in the town, so he earns the Movie Churches rating of 3 Steeples.
Posted by churchandstates at 7:08 AM