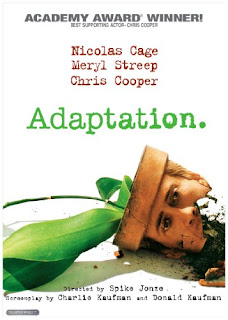 The month of September will be Authors Month here at Movie Churches, so we'll be looking at clergy and churches brought from the page to the screen. In preparation, we thought we’d look back at our favorite films that originated as novels. Remember. our steeple ratings don’t correlate to the quality of the film, just to the clergy and churches in the film. Regardless of their steeple ratings, we think all ten of these films are worth checking out. (Most of the novels these films are based on are worth checking out as well. Since we’re just featuring movies based on novels here, favorites like Babette’s Feast and Ordet weren’t included.)

10) Contact (1997)
Carl Sagan was certainly a better scientist than novelist and certainly was no theologian. But this film was a fun work of science fiction and raised interesting questions about faith. Jodie Foster gives a great performance as an astronomer battling the idea that there might be something beyond the material universe, and Matthew McConaughey is the most unorthodox clergy figure we’ve featured.

9) Diary of a Country Priest (1951)
Robert Bresson’s film is rightly remembered as a classic, but the priest in the film is an annoying jerk. Still, it well captures this time and place in France and the challenges of ministry.

8) Moby Dick (1956)
This Herman Melville’s work is arguably the greatest American novel. But that book, which goes into long digressions about theology, philosophy, and law, is not really what's been adapted here. Ray Bradbury’s screenplay is more like an adaption of the Classics Illustrated Comic of the story, concentrating on the nautical adventure. I’m okay with that.

7) War of the Worlds (1953)
Along with Contact, this makes two science fiction novels by atheists, and yet this film presents a church as a place of refuge and comfort, and God is ultimately the hero of the tale.

6) The Trial (1962)
Understandably, this film based on Franz Kafka’s fever dream of one man’s senseless persecution doesn’t find much hope in the church or any other institution, but the priest is one of the few people that shows any genuine concern for “K.”

5) Black Narcissus (1947)
This is such a visually powerful film it almost comes as a surprise that it's based on a novel. But look it up: Rumer Godden published the book in 1939. She also wrote The River which was made into a stunning film by Jean Renoir.

4) All Quiet on the Western Front (1930)
This is one of those rare times when both the film and the novel it's based on are considered classic, and it would be hard to say one is better than the other. They're famed as perhaps the greatest anti-war works. (Does anyone set out to make a pro-war novel or film? Well, maybe Joseph Goebbels…)

3) The Hunchback of Norte Dame (1923, 1939, 1996)
I very much appreciate several film adaptations of this novel, so perhaps I should get around to reading the Victor Hugo classic sometime. If the book is anything like the films (silent, talkie, animated, black & white, color…), the clergy won’t come off well.

2) A Clockwork Orange (1971)
This a film that is greatly loved by some and greatly despised by others. It's violent, sadistic, and perverse. Those are qualities in the book as well, but it can be much tougher to take on the screen. The arguments for and against the importance of free will have perhaps never been made better than in the book and the film.

1) Wise Blood (1979)
It usually sounds pretentious and annoying when someone says, after watching a film, “The book was so much better.” We've all heard people argue the book is always better, an argument easily disproved with Jaws and The Godfather. But Flannery O’Connor’s novel is better than this film. It’s a great book about the futile attempt of a man to run from God. Considering the difficulty of the task, John Huston makes a pretty great attempt here. (FWIW, Huston also directed the above-mentioned adaptation of Moby Dick.)

Posted by churchandstates at 4:42 PM