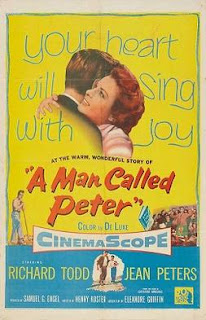 In A Man Called Peter, a portion of the film recalls a canteen created in a Washington D.C. church. During World War Two, the New York Avenue Presbyterian Church opened its doors for a “Saturday Evening Canteen” with “Songs” and “Jokes.” (I noticed that the film also showed trays of donuts. A consistent thing, perhaps because it was true, is that these films always show donuts served.) According to the film, the pastor of the church, Peter Marshall (Richard Todd), got into some hot water for this.

In the film, Marshall instigates the canteen and leads in the singing of popular songs (such as “Mairzy Doats”) around the piano. Many from the church volunteered (even a U.S. Senator who attends the church). But one night, an elderly matron of the church, Miss Laura Fowler (Marjorie Rambeau) comes to the church to bring flowers to the Lincoln Parlor on the anniversary of the 16th President’s death (Lincoln attended the church). As she steps into the parlor, she sees a couple kissing! She's appalled and tries to have the canteen shut down due to the scandalous behavior.

Fortunately, Rev. Dr. Marshall is able to explain that the couple had just been married by Marshall himself. The young sailor was about to be shipped overseas, and he and his new bride were enjoying their two-hour honeymoon. The couple had just forgotten to lock the door. The scandal is averted and the canteen is allowed to carry on.

Miss Fowler doesn’t know how easy she has it.

I was a youth pastor for many years. At various camps and retreats, teenagers were caught doing more than kissing, and I worked as a chaplain in a mission homeless shelter where one of my chief duties was to make sure the restrooms weren’t used for drug deals and other carnal transactions.

Miss Fowler's idea of the church is that it is a place where nice respectable people go to meet one another for the edification to be found in sermons and fine music. Marshall preaches a different view of the church: “Religion is not for sale, it is given away. The Christ of the Scriptures was a manly Christ. He himself was red blooded: he called a spade a spade and let the chips fall where they may…He invited people the church doesn’t usually appeal to. He wants people of all kinds, He want to hear laughter…His big carpenter’s hands stretched out in welcome.” (Marshall’s description of Christ here is rather like the contemporary criticisms of modern American evangelism, equating Jesus with John Wayne, but I still find his vision more compelling than Miss Fowler’s.)

The canteen is just a small part of this film. The rest tells the story Peter Marshall (not to be confused with the host of Hollywood Squares), who was born in Glasgow, Scotland, in 1915 but migrated to America and went on to become a prominent pastor and the Chaplain of the United States Senate.

I’ve included A Man Called Peter (based on Catherine Marshall's biography) in our month on War Churches because of the ministry of his church to servicemen and for one other incident in Marshall’s life portrayed in the film. His wife, Catherine (Jean Peters), gives birth to their only child, a son, on the same day that Marshall was to address the United States Navel Academy in Annapolis.

He leaves his wife and newborn son to give the address. Arriving at the school, he feels compelled to give a different sermon than the one he originally planned. For his text he uses James 4: 14, “Your life is a vapor.” He says this is a “strange statement to find in the New Testament.” I don’t find it a strange statement at all. All of Scripture points to the life’s brevity and the parables of Jesus often have life coming to an unexpected, abrupt end. But nonetheless, Marshall goes on to preach about the need to prepare oneself to meet God because no one knows when this life may end.

The date of Marshall’s son’s birth and his address to the Navel Academy was December 7, 1941. The day the Japanese attacked Pearl Harbor, which shortly led to the United States entering World War Two. Death was about to be a tangible reality to the young sailors that Marshall spoke to on that day. And Marshall’s ministry was about to be greatly changed by during war time in the nation’s capital.

Marshall would struggle with mortality in his own life, too. His wife suffered a prolonged illness which kept her bedridden for many months. Marshall also faced his own life-threatening illness (neither illness is specified in the film) but recovered with the help of the prayers of his congregation. But in 1949, Marshall spoke to his congregation about being homesick for his native land of Scotland. He then fainted in the pulpit and passed away at the age of 46.

One might argue that there isn’t much warfare in this film to qualify for including it in our theme of “War Churches,” but according to Ephesians 6, every believer should put on “the full armor of God” to engage in battle against the “forces of darkness.” Because the Reverend Doctor Peter Marshall fought that battle well, we’re giving him and his church in A Man Called Peter our highest rating of Four Steeples.
Posted by churchandstates at 5:05 PM