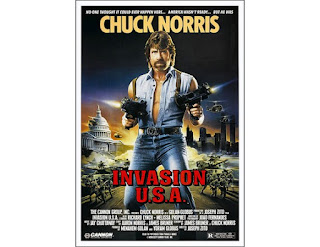 “Time waits for no man. Unless that man is Chuck Norris.”

“In the Beginning there was nothing ... then Chuck Norris roundhouse kicked nothing and told it to get a job.”

Chuck Norris jokes have been around for a while, and there's often a tinge of blasphemy in them. Norris in the jokes is always omnipotent, but he's often omniscient and omnipresent as well -- all the qualities of divinity and then some. So it seems strange to have a Chuck Norris film in Movie Churches. Isn’t Chuck the one worshiped in his films? Why would one need a Christian church?

But since we did find a Christian church in a Chuck film, though it showed up quite briefly. That church is going to have to share the post with another church in another film this week. 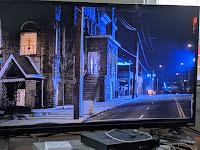 Invasion U.S.A. tells the story of a terrorist army, almost certainly Communists, led by Mikal Rostov (Richard Lynch) in an attack against the United States of America. Rostov boasts, “America hasn’t been invaded by a foreign invader in 200 years. Look at them, they don’t even recognize their freedom, or how it can be used against them.” (Actually the terrorists seem to only attack Florida, with a few stops in Georgia. A shopping mall, a Cuban ex-patriate nightclub, and Chuck’s shack in the Everglades are attacked, and it’s like all of America is attacked.)

The authorities recognize the danger with the shootings and the bombings and such, so they do the sensible thing: go to former C.I.A. agent, Matt Hunter (Norris), and ask him to deal with the problem. Which he is willing to do because the baddies killed his friend, John Eagle (Dehl Berti) -- but only on his own terms. He has to work alone (“I’ll take the assignment, but remember, I work alone.”) So, spoilers: Chuck… I mean, Matt… does take on the enemy forces and wins his one-man war. (Okay, at the end, he does allow the National Guard to help a bit, just out of politeness.)

So where is the church? In the middle of the film, Miami is under martial law because of the terrorist attacks. We see a small family, a father, mother, and daughter, wandering the street. They come upon a church and enter as the minister is praying, “Oh Lord, our God, protect your children in this our time of need.’

A strange thing about this church is that though it's near Christmas in the film, and a nearby mall was quite decorated for Christmas, this church is not. They are, however, doing good church things. The congregation sings “Rock of Ages” and then joins together in reciting the Lord’s Prayer.

But all the while, the terrorists are planting a bomb on the church. Fortunately, the plan is foiled by our savior, Chuck Norris. The terrorists try to detonate the bomb, but nothing happens. Chuck calls to them, “Didn’t work, huh?” He throws the bomb their way and calls out, “Now it will!” and it does.

Though it also only has a short segment in a church, The Ninth Configuration puts themes of the Christian faith in the center of the story and throughout the film. This is less surprising when one knows the writer and director of the film was William Peter Blatty, the creator of The Exorcist, a very Catholic and very Christian film. Some might object to a horror film being described in this way, but I would also argue that this film, full of profanity and madness and unexpected outbreaks of great violence, is also very Catholic and very Christian.

Stacy Keach plays Col. Vincent Kane. We are told the Colonel is a psychiatrist sent to an asylum to care for men who left the battlefield because they went mad (fans of the TV show M*A*S*H know this is referred to as a Section 8 Discharge). There are certainly men who act mad: Lt. Frankie Reno (Jason Miller) is trying to direct a production of Hamlet with an all-dog cast. When this proves difficult, he attempts to do the same with an all-sheep cast.

The higher-ups in the military want Kane to discover whether the men are truly mad or just trying to avoid battle in the unpopular Vietnam War.

But Kane focuses most of his effort on Captain Billy Cutshaw (Scott Wilson) who refers to God as “The Big Foot.” Cutshaw was not serving as a soldier, but rather as an astronaut who seemed to go insane before a flight to the moon. When Kane asks him why he refused to fly to the moon, Cutshaw refuses to speak but instead gives Kane his St. Christopher medal.

Eventually, Cutshaw does talk with Kane, engaging in arguments over theology. Kane argues that creation is much more easily explained by God than random chance, but he argues that the best evidence for God is to be found in acts of self-sacrifice. The bulk of the film is Kane trying to prove God to Cutshaw in that way.

But before that happens, Cutshaw asks Kane to take him to Mass. Cutshaw comes to meet Kane at the car dressed rather like Little Lord Fauntleroy. When Kane stares at his string tie and shorts, Cutshaw asks him, “Why would ‘the Foot’ care what I wear?”

The priest preaches from John 10, “If anyone enters by Me, he will be saved. The thief comes only to kill, steal, and destroy, but I have come that they might have life in all its fullness…The good shepherd gives his life for his sheep.”

After the sermon, Cutshaw stands and declares, “Infinite goodness means making a creature that you know in advance will complain.” And then he sits again. The priest and the congregation seem to take Cutshaw’s outburst and dress all in good stride. When Kane and Cutshaw return to the asylum, the patient says to his doctor, “Thanks, I dug it.”

Though neither the church in Invasion U.S.A. or The Ninth Configuration receives much screen time, we like what we see -- and give both churches our highest rating of Four Steeples.
Posted by churchandstates at 10:03 PM