I Read the Book Month: A Clockwork Orange 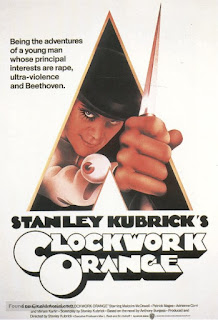 A Clockwork Orange (1971)
Once, in a sermon, our friend Kate Braestrup mentioned that there are two characteristics that inspire fear in people of every culture of the world: being young and being male.

If there was ever a book -- and a movie adaptation -- that would reinforce those fears, it’s Anthony Burgess’ A Clockwork Orange and Stanley Kubrick’s adaptation of that novel.

Both the novel and the film tell the story of Alex DeLarge, a young man who lives a life of violence and debauchery. (As the novel begins, Alex is 15 years old, but in the film, his exact age is never given. Though the character is still living with his parents and going to school, the actor playing the role, Malcolm McDowell was 27 at the time of production. He's obviously meant to be much younger.)

He and his pals Pete, George, and Dim go about the countryside of a future, dystopian England committing random acts of violence, robbery, and rape. One would be quite sensible to look at these approaching youths and consider the worst.

The acclaim the novel and the film achieved isn’t strictly within the purview of Movie Churches. Burgess’ work is in Modern Library’s list of the 100 best English language novels of the 20th Century and Kubrick’s work is on the American Film Institute's list of 100 greatest films, but the works differ in a couple of significant ways.

In the novel, sex and violence are described in a way that allows the reader to be distanced from the events. Alex, the first-person narrator of the story, uses a Russian-influenced slang called “Nadsat." In the film, Alex also uses this slang in the narration, but because it's a movie, we (the audience) witness disturbing acts of sadism and sordid sexuality. The film received an "X" rating upon its release (and I’m pretty sure this is the only X-rated film we’ve reviewed here at Movie Churches.)

The other major difference between the film and the book is the conclusion. Burgess wrote a final chapter for the book that -- for a time -- wasn’t in the American version of the book, though it was in the British edition. In that final chapter, Alex is an older, more mature, and settled man. He observes his friend, Pete, who left his life of violence, married, and is raising a child. The book suggests the grace and redemption that were a part of Burgess’ Catholic worldview. The conclusion of Kubrick’s film is much more cynical, suggesting that Alex will go on as a creature of lust and brutality, but he will also be a pawn of the government.

But here at Movie Churches, we just want to know whether there is a church. And there is, of a kind. Alex is sentenced to fourteen years in prison for murder. There the prison chaplain (Godfrey Quigley) gathers inmates for services. Our first impression of the chaplain is not entirely favorable. He’s preaching a fire and brimstone sermon.“What’s it going to be like for you?" he harangues. "Is it going to be more in and out of institutions like this? Or are you going to attend to the divine Word and realize the punishment that awaits unrepentant sinners in the next world as well at this? A lot of idiots you are, selling your birthright for a saucer of cold porridge.”

His sermon is continually interrupted by inmates making belching and farting sounds. The guard demands quiet and respect and the chaplain preaches on.

During the service, the inmates sing the hymn “I Was a Wandering Sheep” (one interesting phrase in the hymn is “I will not be controlled”), and Alex himself mans the overhead projector. We find he's taken on the role of chaplain's assistant. As Alex says, “It was my rabbit to help the Prison Chalie with the Sunday service. He was a bolshy, great burly bastard. But he was very interested in me, being very young and very interested in that Big Book.” 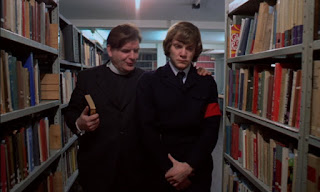 Alex is interested in the Bible, but it doesn’t seem an exactly healthy interest. He imagines the crucifixion, but with himself as a Roman soldier, whipping and beating Jesus. He says of the Bible, “I didn’t so much like the later part of the book, which is more like preachy talking than fighting and the old in and out.”

But the chaplain has hope for Alex and spends a great deal of time with him talking in the prison library. He never calls Alex by his name, but always refers to him by his prison number - 655321.

One day, Alex tells the pastor he needs to ask a question in private. The chaplain thinks he knows what will be asked. “Is there something troubling you, my son? I know the urges that can trouble young men, deprived of the society of women.”

But Alex is asking something very different. The government is testing the “Ludovico treatment,” experimental psychological conditioning to reform criminals. He wants to be part of the program so he can be released from prison. “I want to be good,” Alex says. (But the viewer is confident he doesn’t want to be good, he only wants out.

The chaplain argues the program won’t make Alex "good." He says,  “The question is whether or not the technique really makes a man good. Goodness comes from within, goodness is chosen. When a man cannot choose, he ceases to be a man.” There the chaplain presents the crucial moral question posed by the film. If a person doesn’t choose to do good (or refrain from evil), is it goodness? Alex takes the Ludovico treatment and can no longer commit violent acts (he also becomes impotent). He also loses his ability to enjoy the work of “Ludwig van,” specifically the Ninth Symphony. The chaplain asks whether this kind of “reform” is worth the price.

For asking the right questions, we’re giving the prison chaplain of A Clockwork Orange a favorable rating of 3 out of 4 steeples.
Posted by churchandstates at 9:19 PM