Bonus: I Read the Book Month: The Legend of the Holy Drinker 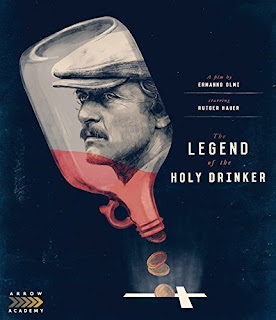 The Legend of the Holy Drinker (1988)
I’m throwing a bonus film into “I Read the Book Month” for a rather sad reason -- the passing of the great Rutger Hauer.

Last week the internets were full of this news, with most stories highlighting Hauer's performance as the android Roy Batty in the science fiction classic, Blade Runner (future trivia factoid Jeopardy answer: "2019" "In what year did Batty and Hauer both die?") Sadly, Hauer spent most of the last several decades making B action movies, but they weren’t all bad. I highly recommend 1989’s Blind Fury. Hauer was in some other popular Hollywood blockbusters like Ladyhawke, Nighthawks, and Batman Begins, among others, but much of his best work was done in European art films. And the best of these may well be The Legend of the Holy Drinker. 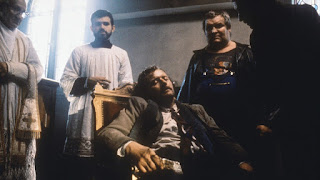 Director Ermanno Olmi’s 1988 adaptation of Joseph Roth’s 1939 very fine novella won the Golden Bear at the Venice Film Festival and was the most acclaimed Italian film of that year. Hauer plays Andreas, a homeless alcoholic who lives under a bridge in Paris. A stranger approaches him and offers 200 francs.

Andreas responds that he is an honorable man and wouldn't want to take on a debt he can’t repay. The stranger replies that Andreas doesn’t have to pay him back. He owes a debt to Saint Therese. All Andreas needs to do, when he has the money to repay, is to take the money to the statue of Saint Therese in the Cathedral. The remainder of the film is about Andreas' attempts to make it to church. There are many obstacles to attending church, but the chief obstacle is found in wine bottles.

Here at Movie Churches, we evaluate clergy and churches in movies, and this movie has a problem fitting in. Most of the film is about someone not getting to church -- like the story of many of our lives. Nonetheless, the cathedral makes a major, though brief, appearance in the last scene of the last act. We’re giving that cathedral and its priests our best rating of 4 Steeples.

Posted by churchandstates at 9:44 PM