Take Me Down to Vatican City Month: The Agony and the Ecstasy 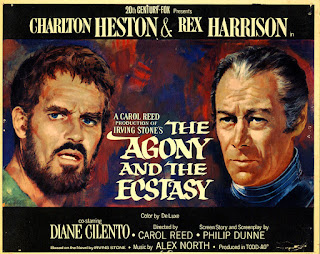 The Agony and the Ecstasy (1965)
I was ordained in the Evangelical Free Church, and I’ve got to admit I have no idea of the name of the current president of the denomination. (Kevin Kompelian. Okay; thanks, Google.) I currently attend a Presbyterian Church (P.C.U.S.A.) and have never given thought about who is the denomination’s president. (Kathy Luekert. Gee, thanks Alexa, but that’s not really the point here.) Whereas most every person who pays attention to media of any kind, even if that person has never set foot in a Catholic Church, knows the name of the Pope. (Yes, Siri, Pope Francis. Everybody knew that. That was kinda my whole point here.)

Whether he wants to be or not, the Pope is a power player in the political world and popular media. This is rarely true for any other religious or denominational leader, and that’s why we’re going to take a whole month to look at films that feature the Pope and the power center of the city/state of the Vatican. After all, I couldn’t find a single film about the President of the Evangelical Free Church of America (not even a documentary.) 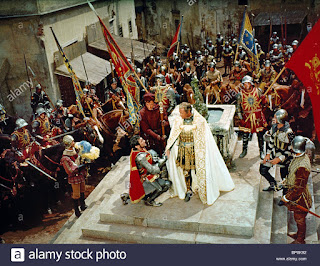 We're kicking off Pope Month with Julius II, a pontiff from history, in director Carol Reed’s 1965  spectacular, The Agony and the Ecstasy. Julie really isn’t the big draw for this film, which tells the story of Michelangelo’s painting the ceiling of the Sistine Chapel. People want the story of Mikey, not Julie, though both are played by big stars (Rex Harrison plays Julius II and Charleton Heston as Michelangelo).  Still, the story (adapted from Irving Stone’s novel) of the film is about the battle between two large personalities. According to the film, Michelangelo didn’t want to do the work, partly because he considered himself a sculptor rather than a painter, but the Pope badgered him to do the work throughout the project.

Of course, here at Movie Churches, we're here to evaluate clergy and churches, not art, but we can't help bringing art up for this movie. But to the point: what kind of clergyman was this Pope Julius II?

One of the first things we hear about him is that he’s “more of a warrior than a Pope.” We first see him in a full suit of armor (literal armor, not the full armor of God of Ephesians 5.) The film takes place during the War of the League of Cambrai, which began with the Papal State joining France to war against the Republic of Venice. The war eventually became the Papal State with Venice battling France (with various European nations pitching in between 1508 and 1516.) 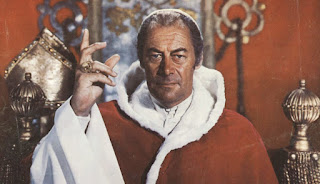 He fights continually with Michelangelo. They fight over what project to work on (the artist wants to continue working on Julius’ tomb when Julius asks him to paint the Sistine Chapel. Julius wanted the chapel to have a tableau of the Apostles and Michelangelo wants to paint… something else. And they argue over money.

Whenever Michelangelo raises the issue of money, the Pope says he shouldn’t discuss such things in the presence of the pontiff. When a price is negotiated, Julius always stipulates that rent will be deducted from payment (rent for housing the Pope provides). At times Julius demands Mike pay the rent, even though the Pope hasn't paid the artist. (To be fair, the Pope is often strapped for cash because he needs money to fight his wars. And when he's really short on cash, he sells more appointments in the church. To help fund the chapel, he promotes five men to Cardinal rather than four.)

Nonetheless, Julius does appreciate Michelangelo’s work. He is impressed by the portrait of God as thoughtful and loving, not vengeful. He says, “What you have painted here, my son, is not a portrait of God. It’s proof of faith.”

The Pope replied, “Not if you’re a saint or an artist. I am merely a pope.”

He also defends the nudity in Michelangelo’s art against some of the cardinals' charges of obscenity. The artist proclaims that the human body is a creation of God, and there is no need for shame, “Shame is a gift from the cardinals”.

When the Pope believes he is dying, he calls Michelangelo to his bedside and commands him to finish his work. The Pope recovers, and the work is finished.

Years later, when the Pope truly faces death, Julius has many regrets. “You make a better priest than I do, Michelangelo. Yet I have tried to serve Him in the only way I know how… It’s a terrible thing to strive for a lifetime and come to the final realization that you have failed.”

From our perspective, Julius II wasn’t a total failure. He not only urged the work of the Sistine Chapel, but also construction on St. Peter’s Basilica. The great art and architecture of this period have led many to the worship of God. Julius considers the best thing he did was commissioning the work of Michelangelo. Speaking to the artist, Julius says, “I take no credit. I was moved by another hand. As easily and skillfully as you move your brush. Strange how He works His will. Let us share pride in having been made His instruments.”

So when it comes to our Movie Churches ratings, Pope Julius II earns a meager 2 Steeples. (And though we don’t rate church buildings, if we could we’d give the Sistine Chapel more than our 4 Steeple rating.)

Posted by churchandstates at 10:59 PM