Take Me Down to Vatican City Month: The Cardinal 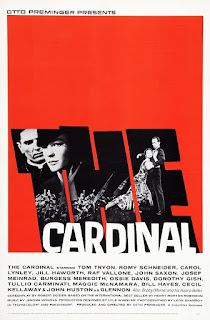 The Cardinal (1963)
I'm sad to report that though it's Pope Month here at Movie Churches, you never see the Pope (or the Popes) in the 1963 film The Cardinal, though much of the film takes place in the Vatican and the pontiff(s) is(are) referred to (but never by name and you never see them). Since the film begins toward the end of World War I (1917) and goes through the beginning of World War II (1940), three popes, Benedict XV, Pius XI, and Pius XII led the Roman Catholic Church, but we don’t hear those names in the film. It reminds me of films where “The President” is discussed -- but not by name. Or Ben Hur where Jesus is talked about, but we never see His face.

So this is a Pope film without a Pope, but we do get (as you probably guessed from the title) a Cardinal. The film opens with the Cardinal’s commissioning service, and the vast majority of the film is a flashback to events in the life of Steven Fermoyle, the man being commissioned.

The film obviously isn't relying on the suspense of who the Cardinal will be...We know it’s Steve. And there’s no suspense about what will happen to Steve...He’ll become a Cardinal.

Since we don’t have that suspense, perhaps we’ll be drawn in by the charismatic leading performance of… Tom Tryon. From what I could find, this was Tryon’s one big starring role in a film (though he was the star of The Magical World of Disney’s mini-series about Texas John Slaughter. The theme song went, “Texas John Slaughter made ‘em do what they oughta, and if they didn’t, they died.” That's how they made kids' shows back in the day.)

What did this movie have to offer?

Director Otto Preminger was known for making movies about bold social issues, and this film takes on a bunch of them. The flashbacks begin with Steve coming back to Boston after studying in the Vatican. He finds his sister, Mona (Carol Lynley), is dating a Jewish man (John Saxon). Through Mona's story,  we face the significant issues of premarital sex, interfaith marriage, and abortion. Dealing with these issues causes Steve to question his faith. He wants to leave the priesthood but is given a leave of absence from the ministry to consider if he wanted to remain a priest. 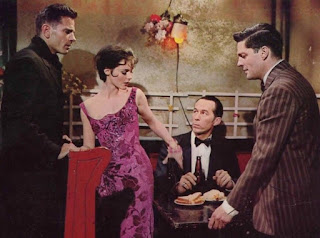 Then we get an intermission. (Because like the Pope films for the last two weeks, this film was designed as a Roadshow Attraction with an intermission, with intermission music. Because theaters need to sell popcorn.)

Returning from intermission we see Steve in civilian clothes as a high school teacher in Vienna. A beautiful woman, a teacher named Annemarie (Romy Schiender), falls in love with him, not knowing he is a priest. Steve must decide whether to keep his vow of celibacy, which leads Steve to return to the priesthood because God is his true love. He returns to serve in the Vatican, as a liaison for American relations. 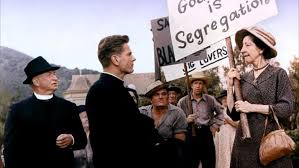 Once back in the priesthood, Steve must face two more big issues. The first is racism. A Catholic school in Georgia won’t allow black students in. Steve goes to investigate for himself after an African-American Catholic church is burned. He confronts bigotry while coming to the aid of a young black priest (Ossie Davis). Frankly, I would have liked the film better if this was the only story. though the way it was told seemed anachronistic. The protest signs, “God’s Law is Segregation” and “Keep Our Catholic Schools White” seem to be out of the 1950s and 1960s rather than the 1930s, but I could well be wrong about that. Steve fights to get the Pope to take a stand, but he must work through the Cardinals to present the case.

The final big issue Steve must deal with is Fascism. The Vatican sends him to Vienna again, just after the Anschluss (Nazi Germany’s invasion of Austria). The Austrian Bishop welcomes the German troops with the ringing of church bells. The Austrian people must vote on a plebiscite to determine whether they want to live under German rule. The Vatican orders the Austrian Bishop to remain neutral on the issue, but instead, the Bishop publicly gives a Heil Hitler salute and encourages priests throughout the country to support the Nazis, because he believes Hitler's promise that the Catholic Church in Austria will be left alone. Hitler immediately reneges on his promise after the plebiscite is approved by the Austrian people.

With war approaching, Steve is made a Cardinal. He preaches at his commissioning ceremony, “Freedom is America’s creed and at the heart of the Gospel… Pray for me that I might not falter, and pray for our beloved country.” Steve, the Cardinal, is sent back to America, and the film concludes. So, if you are looking for pro-American clergy, Steve is your guy. 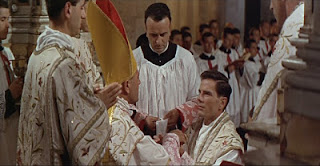 Every week, we rate the clergy and/or church in a film, examining their approach to ministry. So, to begin with, let’s look at how Cardinal Steve approaches those significant social issues tackled in the film.

Inter-faith marriage - Steve is okay with it, as long as the non-Catholic spouse agrees to not interfere with the faith of Catholic spouse, or have anything to do with the religious education of the children (so standard Catholic take)

Abortion - Steve, as the family member making the medical decision, doesn’t okay an abortion for his sister’s health (sister dies, baby is saved). 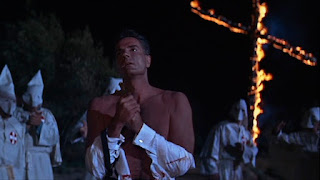 Celibacy for priests - He’s for it

Fascism - He’s against it.

Racism - Stands with Scripture in opposition to it.

So, Steve’s positions on these various issues are reasonably consistent with the teaching of the Roman Catholic Church in the first half of the 20th Century.

What I found troublesome was Steve’s take on salvation. We see him teaching a Sunday School class of middle schoolers. Two boys approach Steve, asking him to settle a bet. “Joe says only Catholics can go to heaven. Why can’t Protestants go to heaven?”

Steve asks the class what they think. Someone calls out, “Because they ain’t Catholics.” The class murmurs agreement. And Steve tells them, “You’re all wrong. The Catholic Church teaches anyone: Catholic, Protestant, Mohammedan, Jew, who does God’s will according to his conscience will go to heaven.” There is a problem with this, which comes from the Apostle Paul quoting the Psalmist in Romans 3 talking about Jews and Gentiles:

So while Steve is talking about salvation through people’s conscience, Paul says that's hopeless, and salvation comes only through the grace of Jesus. This brings Steve down a full Steeple in the Movie Churches rating system. But since he's anti-Ku Klux Klan and anti-Hitler (half of which might have been bold stands in 1963), we’re giving Cardinal Steve three out of four steeples.
Posted by churchandstates at 10:05 PM