Take Me Down to Vatican City Month: The Shoes of the Fisherman 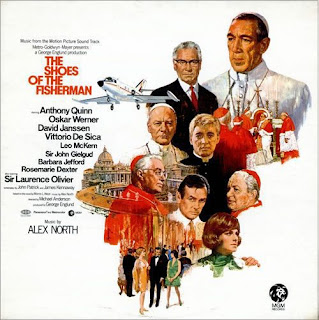 The Shoes of the Fisherman (1968)
This week’s Pope film, 1968’s The Shoes of the Fisherman, has a number of things in common with last week’s film, The Agony and the Ecstasy. Both were epics released in the “Roadshow” release style used by studios in the 1950s and 1960s in an effort to make movies into “events” to battle television's growing competition. Before a film had a wide release, screenings where moviegoers had to buy tickets in advance were held in major cities.

An overture consisting of music from the film's score played before the movie began. At the end, exit music played. (I'm all for bringing back overtures, thus killing the extra-insipid, plot-spoiling trailers and theatrical ads for Coke and Hulu.) "Roadshow" films also had intermissions that usually lasted fifteen minutes. That makes sense for a film like Lawrence of Arabia (clocking in at 3 hours and 36 minutes) or Ben Hur (3:32), Shoes is only 2 hours and 42 minutes and Agony is even shorter -- 2 hours and 18 minutes, which is about the length of your average Avengers film. The attempt was to make these films appear more epic than they perhaps deserved. 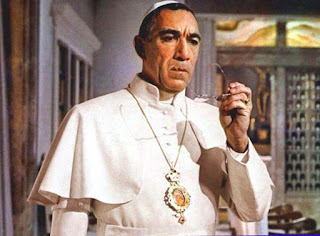 Both films are also based on 1960s New York Times bestselling novels. Shoes is based on a novel by the Australian writer, Morris West, who has specialized in novels focused on political intrigue within the Roman Catholic Church. Shoes of the Fisherman (the novel) had the PR blessing of being released on the day Pope John XXIII died. The novel The Agony and the Ecstasy was written by Irving Stone (who also wrote another bestseller-turned-into-a-major-motion-picture, Lust for Life, about Vincent van Gogh). Unlike the books featured in July’s “I Read the Book” Month, I doubt I’ll ever get around to reading these novels because if they're anything like these films, they’re long and tedious. I know you’re not supposed to judge a book by its cover, and you probably shouldn’t judge a book by its cinematic adaptation, but there you go.

But since they both feature popes and other clergy, I'll watch them. That's sort of the point of Movie Churches.

We meet the central character of this story, Kiril Pavlovich Lakota (played by Anthony Quinn) as a political prisoner in the Soviet Union, who has served two decades in Siberia. During his time of imprisonment, the authorities pressured him to renounce his faith. Stories are told of how Kiril was forced to watch other priests killed, but he stayed true to God and his vows. 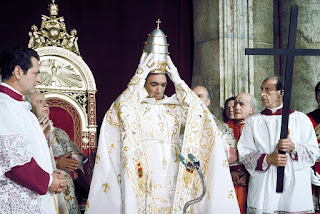 His release is a worldwide news story, and Kiril gives an exclusive interview to a network reporter, George Faber, played by TV star David Jannsen. (The film wastes so much time on Faber’s marriage and affair with a younger woman. I guess they wanted to throw some romance into a story about a group of men who made vows of celibacy.)


Kiril is soon promoted to the role of Archbishop and makes the questionable choice of making Father David Telemond (Oskar Werner) his main advisor. Telemond is a theologian and Kiril is bothered by the fact that Telemond never discusses the soul in his writings. He writes the “Cosmic Christ” more than of Jesus of Nazareth and his theology seems quite dodgy from an orthodox position. Telemond says, “I believe in a personal God, Christ, and the Spirit. But if I lost faith, I would still believe in the world.” So he believes in the world more than God. Okay, interesting take for a priest.

The pope dies and the film focuses on the political intrigue involved in selecting a new pontiff. Eventually, Kiril is chosen as the new pope. (Jannsen’s reporter breathlessly tells his audience, “It’s the Russian! There’s going to be a Russian Pope!”)

It takes some convincing, but Kiril eventually agrees to become pope, “I accept, and may God have mercy on me.” But he won’t take a new name. “I will be called by my own name.” Personally, I always found the tradition of a pope taking on a new name charming, just as “Simon” became “Peter,” but Kiril isn’t into it, wanting Mother Russia to be remembered in his Vatican role.

As Pope, Kiril makes the surprising decision not to publish Telemond's work under the authority of the church because the beliefs he writes about are heretical. Not a bad choice, but you have to wonder why Kiril's had this guy as his chief advisor.

As Pope, Kiril wears civilian clothes to visit the common people in Rome. He comes across reporter Faber’s wife, Dr. Ruth (Barbara Jefford) and goes with her to visit a dying Jewish man. He gives the man a blessing in Hebrew. He also gives Ruth some marital counseling (“You must ask yourself whether your love has been misplaced, or if it was never really there.”) 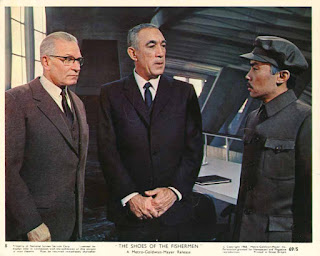 He also puts on a civilian suit to attend a summit between the Premier of the Soviet Union and the Chairman of Communist China. Throughout the movie, the two countries have been on the brink of war because the people of China are starving. The Soviet Union's grain could be theirs if they invade, Pope Kiril hopes to be an emissary of peace, but the Chinese Chairman says, “You come only with words.”

The Pope counters, “There is a man buried in London who had only words, but he brought about both of your revolutions.” Hearing this Pope praising Karl Marx, whose philosophy had led to both governments and whose teachings led those governments to oppress Catholics as well as other people of faith, rather astounded me. It's arguable the words of Marx led to the actual famines during Stalin’s reign and the film's fictional Chinese famine.

Upon his return to the Vatican, Pope Kiril (in his first major address to the world) vows to give all the wealth of the Roman Catholic Church, selling all art and properties, to the “starving brothers in China.” He doesn’t consult with anyone before making this decision, which I consider rather rash. Though I am rather critical about the wealth stored by the Vatican, would the authoritarian rulers of China be better stewards of that wealth? And how is he going to go about selling the art? Is the Sistine Chapel going on the auction block?

Jesus said His followers should be as shrewd as serpents but as harmless as doves. This pope seems as shrewd as a sheep, and that can be a dangerous thing. But because he wants to do what is right, Pope Kiril still receives a three (out of four) steeples as his Movie Churches rating.
Posted by churchandstates at 11:43 PM