Take Me Down to Vatican City: Saving Grace 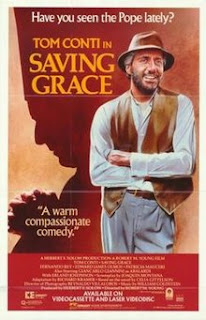 Saving Grace (1986)
By my count, there have been four films and one TV show with the title Saving Grace. This post is about only one of them.

We are not looking at the 1998 New Zealand film about the woman called Grace who falls in love with a man who claims to be Christ. Nor are we watching the 2000 Craig Fergusen film about a cannabis farmer. Not the 2009 film about the Great Flood of 1951, either.

Nope, we’re looking at the 1986 film Saving Grace because it features a Pope, and I’m happy to report that this, the fifth pope movie of the month, is not deadly dull, making it unlike the others.

Tom Conti plays Pope Leo XIV, a young pope who begins to tire of his job after a year. He’s sick of going to meetings all day long. He’s discouraged by demands that he perform miracles to heal the sick and dying. He is disgusted by requests from the Vatican bank that he works to get people to open savings accounts. He misses his life as a priest, his involvement in people’s lives. Leo gets an idea when a deaf girl named Isabella (Mart Zoffoli) hitchhikes to Vatican City to tell the Pope that her village has no priest. 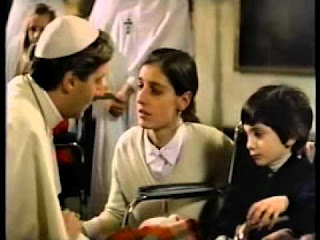 The Pope takes off his robes, dresses as a poor man, and makes his way toward Isabella's village. As he gets close, he discovers it's under quarantine for smallpox. He hides in the back of a truck delivering food and gets into the village. When he finds Isabella, he tells her to keep it quiet that he's the Pope. Isabella introduces him to her mother, Lucia (Patricia Mauceri), telling her Leo is a man looking for work. Though Lucia tells him there is no work to be found in the village, she agrees to let him rent a room in her home.

Undercover Pope finds some interesting things about the village. The village church has been abandoned, except for a tween-age wannabe mobster, Giuliano (Anthony Evans), who uses the sanctuary for hiding stolen goods. Leo also discovers that the quarantine is a fraud. Villagers are pretending to be sick so the government will ship in free food. The village doesn't have a good source of water for farming, but Leo also finds an unfinished aqueduct that could supply the needed water. 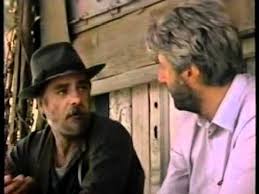 Leo takes on the job of completing the aqueduct and finds there are powerful opponents to the plan --particularly a man named Ciolino (Edward James Olmos) who likes the idea of living off welfare rather than working. Ciolino even gets a crew together to set the aqueduct on fire.
Someone else has noticed the construction project: a shepherd who teases Leo. Oddly, the shepherd recognizes Leo as the Pope. He also used to be a metaphorical shepherd -- the village priest.

Leo asks why he left the priesthood, “Did you quit, or were you fired?”

The shepherd says he was fired by God. He felt God didn’t come through for His people.

Meanwhile, back in the Vatican, officials scramble to cover for the missing Pope. To do so, they are less than honest.

Before we get on to evaluating the clergy and church (really the whole point of this blog) I want to say something about the film itself. It was fun. It was a pleasure to spend time with these characters, even the children, which isn’t always the case with child actors. After four weeks of watching Pope films that were long, pretentious, and dull, it was nice to have a film that was entertaining, as movies should be. 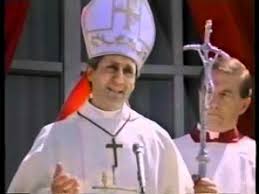 So what can we say in favor of Leo XIV?

First of all, nothing can be more Christlike than Leo’s choice to leave the pomp and luxury of the Vatican to go to a village as a common laborer. In Philippians 2 Paul wrote, “Being in the very nature God, [Jesus] did not consider equality with God something to be used to his own advantage; rather, he made himself nothing by taking the very nature of a servant, being made in human likeness.”
Leo’s decision to live as a commoner is a wonderful picture of the incarnation.

As a commoner, Leo has his ups and downs. He does a good job of resisting some temptations, but not others. Isabella's mother makes a pass at him, and he resists. When people mock him, he doesn’t say, “Do you know who I am?” But he does resort to violence when Giuliano is attacked. Many would have problems with a Pope who throws a punch.

As for the Church of Rome, it doesn’t come across that well. The cardinals of the Vatican seem to be petty bureaucrats who seem more concerned about appearances than ministry.

I have one other problem with Pope Leo. He returns to the Vatican for Easter Sunday. When he comes to the balcony to preach, he tells the story of his adventures in the village. It 's Easter, Papa. That's the day to tell about the Resurrection, the greatest story ever told, even if your story makes for an entertaining couple of hours.

Still, we're fans of Pope Leo XIV, giving him a Movie Churches rating of 3 out of 4 Steeples.


Posted by churchandstates at 9:07 PM