I Read the Book Month: The Hiding Place 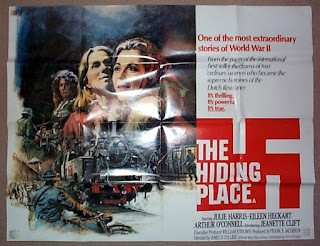 This month at Movie Churches, we’re looking at films made from books -- literary fiction for the most part. The Hiding Place is an exception, since the book, written by a survivor of Nazi concentration camps, tells the true story of Corrie ten Boom's family's attempts to save Jews during the Holocaust.

The book might not have the literary pedigree of other books featured this month. Corrie ten Boom and her co-authors, John and Elizabeth Sherrill, are Dostoyevsky or Kafka. Nonetheless, it’s a powerful story that has challenged many, myself included, for decades. The ten Boom family's examples of love, sacrifice, and forgiveness continue to inspire and convict those who read her story.

Corrie was a middle-aged woman living with her sister and parents in the city of Haarlem when the Nazis invaded the Netherlands in 1940. The family found themselves helping Jews as German control tightened, eventually hiding people in their homes as they made their escape to freedom. Corrie and all her family were eventually arrested and sent to concentration camps. Corrie was the only one who survived the war.

Every other World Wide Pictures film made during Billy Graham’s lifetime featured the evangelist, often in an extremely awkwardly shoehorned-in scene The historical nature of this film freed the filmmakers from that requirement, but Corrie ten Boom herself appears at the end of this film.

There isn’t much church or clergy in this Christian film, but the official clergy member doesn’t come off well. Pastor De Ruiter is nervous and critical of the ten Boom’s decision to help Jews in need. He is quite obviously afraid of the Nazis and is quite willing to kowtow to the evil forces.

This distresses and puzzles Corrie who is doesn’t understand how a pastor could act this way. Her father, Casper, explains that just because someone serves in the church doesn’t mean they are serving Christ. He says, “A mouse might be in a cookie jar, but he is not a cookie.” (It should be noted that in the book and real life, the ten Booms' circle included good clergy, doing good work. Corrie’s brother, Willem, a pastor in the Dutch Reformed Church, first brought a Jewish man who escaped from Germany, to be with his family.)

But if you define the church in a less formal way, as people who love Jesus gathered together to worship Him, then there is a quite wonderful church represented in the film. In the concentration camp barracks, Betsie and Corrie meet with other women to read from their miraculously preserved Bible and to pray and sing hymns. One of the reasons they are able to worship freely is because the guards fear the lice and fleas in the barracks. Betsie realizes that pests and vermin prove to be a gift from God.

Because of this, I’m going to split the steeple ratings this week. Because of the difficult circumstances he faces, we will give the cowardly Pastor De Ruiter a perhaps too generous Movie Churches rating of Two Steeples, but to the church meeting in the barracks of Ravensbruck, we give our highest rating of Four Steeples.

Posted by churchandstates at 7:46 PM