I Read the Book Month: The Brothers Karamozov 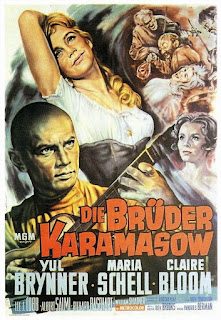 Is there a more annoying guy than the one who answers the question, “Did you see (movie)?” by responding, “No, but I read the book.” So pretentious. So pompous. So supercilious.

I guess I should warn you: that is the person I intend to be for the rest of the month. To make things worse, I’ll be starting the month with a movie based on one of Dostoyevsky's novels.

Until recently, if you asked me, “Did you see the 1958 movie version of The Brothers Karamazov?” I would have replied, “No, but I read the book.” Now, I’ve seen the movie as well.

It isn’t nearly as good.

Of course, most critics consider Karamazov one of the greatest novels ever written. It’s had admirers as diverse as Sigmund Freud, Albert Einstein, James Joyce, Virginia Woolf, Cormac McCarthy, William Falkner, Walker Percy, and Joseph Stalin. (It’s still a great book, even if it was admired by a mass murderer -- by whom I mean Uncle Joe, not Virginia.)

The novel and film tell the story of a scoundrel of a father, Fyodor (Lee J. Cobb), and his three sons, Dmitri (Yul Brynner) is a partying sensualist, Ivan (Richard Basehart) is a hard-working atheist, and Alexi is a novice in the local Russsian Orthodox monastery. There is also (spoilers for a novel a couple of centuries old) a fourth, illegitimate son, Smerdyakov (Albert Salmi), who works as a servant for Fyodor.

The novel is full of discussions of philosophy, ethics, and theology. The film doesn’t have time for such things, omitting even Ivan's great dream, “The Grand Inquisitor,” which tells the story of Jesus returning to Seville at the time of the Inquisition. The movie does have time for the love triangle between Demitri, Katya (Claire Bloom), and Grushenka (Maria Schell) -- who's also Fyodor’s lover. 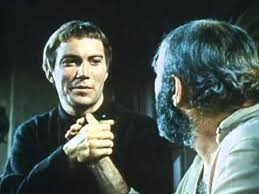 Alexi, who Dostoevsky describes as the hero of the novel, gets relatively little screen time. That's unfortunate for us here at Movie Churches, because Alexi is, after all, the clergyman of the family. We’d also love to have more time for the film’s Alexi because he's played by one of the great emoters of our time: William Shatner, Captian James T. Kirk himself.

Alexi is always trying to make peace among his brothers, between his brothers and his father, and with anyone else who's not getting along. He’s generous to a fault, sharing what little money he has with his brother, Dmitri, even though his brother is likely to gamble and drink the money away. So, yeah, in modern parlance it might be said Alexi encourages codependency, but he has a good heart.

One of the most amusing things about Shatner in the role is that with his monk robes and closely cropped monk haircut, he looks very much like a Vulcan.

Alexi is described as a “lover of humanity” who says of himself, “I don’t respect money.” He fervently seeks the salvation of his father and brothers. Dmitri truly loves and respects Alexi, though he constantly takes advantage of him. His father appreciates the respectability a monk brings to the family. Ivan considers his brother a fool.

But Alexi is not the only holy man in the film. Fyodor and Dmitri have, for years, argued about Dmitri's maternal inheritance. Alexi proposes a mediator for the dispute, Father Zossima (William Vedder), who everyone considers a saint. He is trusted to be fair because he has respect for all people, no more respect for rich than he has for poor. When Zossima comes, Fyodor tries to make his case, but Dmitri gives up his claims. Zossima shocks them all by bowing to Dmitri and telling Alexi that his brother is destined for greatness.

Alexi continues to help both of his brothers as much as he can. He is even willing to defy the law when Dmitri is convicted of a crime. Alexi believes in his brother’s innocence, so he helps him flee the country.

Honestly, even though saying it is annoying, the book is SO much better than the movie -- but that isn’t the concern here at Movie Churches. Alexi and Father Zossima are both good clergymen, earning our highest rating of Four Steeples.
Posted by churchandstates at 7:26 AM

Email ThisBlogThis!Share to TwitterShare to FacebookShare to Pinterest
Labels: based on a book, Lee J. Cobb, William Shatner, Yul Brynner