The Last Laugh for Comedy Month 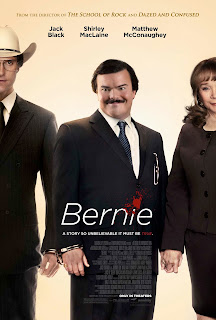 Bernie (2011)
When my wife, Mindy, and I were in Las Vegas in 2016, we found it interesting that the wedding chapels we visited were designed to resemble churches without religious imagery. They had steeples, but not crosses. They had stained glass without saints. Whoever planned those chapels knew that looking like a church was good marketing, but they didn’t want to make people uncomfortable by associating the chapels with God or have the facility mistaken for a Christian church.

Funeral homes take a different marketing approach. In the 2011 film, Bernie, an assistant mortician insists on placing crosses throughout his funeral home so people will mistake the place for a church -- making it all the easier to sell the higher end coffins. The services held in the funeral home are Christian worship services with Scripture and hymns -- but the funeral home is definitely not a church.

Thankfully (for Movie Churches), there is an actual church in the film: Carthage United Methodist Church. There is actual clergy, too, in the church's pastor. I'm extra thankful about this because I'm happy to let people know about this wonderful film by Richard Linklater.

So many filmmakers seem to know only California (Southern California, and the LA area in particular) and New York (NYC, and Manhattan in particular), so it’s good to have a writer and director who knows another place. Linklater really knows his home state of Texas. He has made many films that capture a feel and often the essence of the place (Slacker, Dazed and Confused, Boyhood, Everybody Wants Some!! and others.) Not many filmmakers get small rural small town life right, and hardly anybody understands church life in a small town. Linklater does.

But does this movie really belong in Comedy Month? The film tells the true story of Bernie Tiede (Jack Black), an undertaker in a funeral home who became a small town hero.

He also shot an old woman in the back and hid her in a freezer.

Does this sound like a comedy to you? It is described in IMDB as a comedy. It’s structured as a comedy. Most importantly, it made me laugh. Therefore, it qualifies.

In his work at the funeral home, Bernie naturally interacted with many widows. He often checked up on these grieving women and took a particular interest in a bitter old biddy named Majorie Nugent (Shirley MacLaine). He begins to spend a great deal of time with this very rich woman who had cut herself off from her family and almost everyone in the town. Bernie and Majorie go on lavish vacations, (such as staying at the Ritz in New York City and attending Broadway shows).

Majorie became increasingly dependent on Bernie, leaning on him for advice in all areas including finances. She even grants him power of attorney, but she also demands more and more control over  Bernie’s life, hampering him from pursuing other interests, like community theater and piloting small planes. Eventually, it was too much. Bernie shot Marjorie in the back with a possum gun and hid her body in the garage freezer in her home.

For the next nine months, Bernie pretends that Majorie is alive, just too ill to see anyone else. He also makes free use of Majorie’s money, buying cars, jet skis, and even a swing set for people he thought were deserving. He donated money to the community theater and local airport. And he gave a significant donation for the construction of a new prayer wing at the Methodist Church.

But Majorie’s stockbroker and her family became curious and found an ally in the local district attorney, Danny Buck Davidson (Matthew McConaughey). Majorie’s body was discovered, and Bernie was arrested.

A more material concern faces the congregation when the government begins to confiscate the cash and goods that Bernie gave with Majorie’s funds. The church must tear down the new prayer wing. I’ve read of other such cases where churches had to give back donated money that was obtained illegally, which is fair and right, but is quite a challenge after budgeting decisions have been made. (But why does a church need a “prayer wing” anyway? After all, Jesus said a closet would do nicely.)

One good thing about Bernie’s arrest: people from the church visit him in jail. It seems to me that Jesus commanded the church to feed the hungry, clothe the needy, and visit prisoners, but many churches have a hard time with the first two commands and ignore the prison visitation entirely. It turns out Bernie organized Bible studies in prison, so he brought some church with him.

I’m kind of relieved I don’t have to give Bernie himself a Steeple Rating. He was a mortician, not a clergyman (though he did read Scripture and sing “Just As I Am”). Linklater and Black obviously have sympathy for the man, though he was a self-confessed killer. The church and Reverend Woodard seem to have tried to do their best in a quite horrible situation, earning a Three Steeple rating.
Posted by churchandstates at 10:03 PM