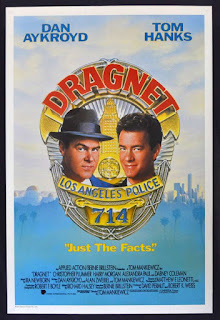 I really hated Dragnet (the motion picture) when I saw it in the theater in 1987. Watching it again, I still found it awful, but for even more reasons. It is, to be kind, a film that hasn’t aged well.

The original Dragnet franchise was the creation of Jack Webb (former altar boy). Stories were taken from the files of the Los Angeles Police Department, and it was made first into an NBC radio drama (1949 - 1957) and then NBC brought it to television. The first incarnation of the show ran from 1952 - 1959. A Dragnet feature film was released in 1954. In these early incarnations, Dragnet was considered fairly gritty and hard-edged. Webb respected the work of the police, believing they worked long hours for low pay in dangerous work to “protect and serve.”

But when a new incarnation of the show returned in the air, Dragnet 1967 (followed by Dragnet 1968, and Dragnet 1969), much of the public viewed Sergeant Joe Friday as a camp figure. His straight-laced approach to law and order became an object of mockery in the boundary-pushing 1960s. 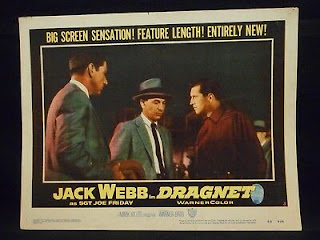 So the 1987 version of Dragnet (made five years after the death of Jack Webb) was a broad comedy. (I’m not going to call it satire, which would imply a more sophisticated take on the subject.) Dan Aykroyd played a new incarnation of Joe Friday --  the nephew of Webb’s character -- a rigid by-the-book veteran LAPD officer. The “laughs” come when he's assigned a hip new rule-breaking partner: Pep Streebeck, played by Tom Hanks.

How cool is Streebeck? He goes to a strip club for his morning coffee and is a regular reader of Bait magazine. In the movie, Friday and Streebeck are led by the trail of the investigation to visit an imitation Playboy Mansion to interview Jerry Caesar (a not very veiled parody of Hugh Hefner played by Dabney Coleman). While Friday tries to keep everything professional, Streebeck acts like a horndog fanboy, pointing out all the former centerfolds by name and staring quite impolitely. In the ‘80s this was “cool,” but in the #MeToo era, one can’t help thinking Streebeck is a creep who, as a police officer, should be more aware of the issues of human trafficking and sexual abuse.

And while Joe Friday follows proper procedure interrogating suspects, Streebeck practices the kind of intimidation popular with screen cops played by the likes of Stallone and Eastwood back in the day. In these days of concerns about police brutality, Friday seems to be an officer more attuned to our times. 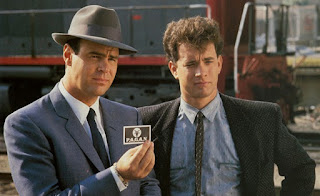 When the film premiered, Friday was presented as a man out of his time. Now, his partner, Streebeck, is the real anachronism.

All of this would be quite relevant if this blog was about morality or ethics, but we're talking about churches and clergy here.

The film opens with Friday's narration as the camera pans the streets of Los Angeles. We see places of worship:  a "Jesus Saves" mission, a temple, a mosque, a donut shop. Friday explains, “even in the City of Angels, halos occasionally slip.” 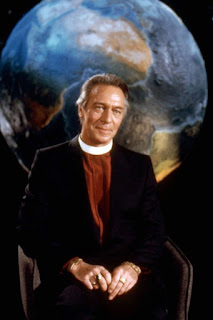 There is a clergyman in the film. Christopher Plummer plays the Reverend Jonathan Whirley, a radio evangelist and the chief villain of the film. He is the founder and director of M. A. A. (Moral Advancement of America) and a great political mover and shaker in the city. His character seems to be modeled after Jerry Falwell, and his organization seems intended to remind viewers of the Moral Majority -- but Falwell was a spokesman for conservative causes and usually for Republican candidates (though, for the sake of tax laws, his endorsements were usually veiled.) It seems odd that such a figure would be a political force in the Democrat-dominated city of Los Angeles (Democrat Mayor Tom Bradley was serving the fourth of his five terms when the film was released.)

We later learn, however, that Whirley is also secretly the founder and director of P.A.G.A.N. (People Against Goodness and Normalcy). He also works with the pornographer Caesar, believing that in order to keep his highly profitable “moral” organization running, corrupt, evil, and powerful organizations need to exist to work in opposition. So he supports both.

As director of P.A.G.A.N., he attempts to practice human sacrifice -- which is not a good look for a man of the cloth. The Rev. Whirley receives our lowest Movie Church rating of One Steeple.

Posted by churchandstates at 7:44 AM