Missionary Month End of the Spear 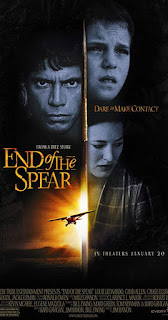 Years ago I read their story in Through Gates of Splendor, written in 1957 by Elisabeth Elliot, the widow of Jim Elliot. After Jim and the others were speared by Waodani tribesmen, Elisabeth and Nate Saint’s sister Rachel went to live with the Waodani people in order to show God’s love for them. Their examples of love and self-sacrifice have long been an inspiration to me.

Told from the perspective of Nate Saint's son, Steve (who was a child when his father was killed) and Mincayani, the Waodani man who killed Nick Saint, the film tells the story of friendship that developed between the two.

It's not just that, though. The film makes a point of telling why the missionaries wanted to contact the Waodani at the time they did. The tribe was quite violent, attacking any and all outsiders, as well as fighting among themselves to the point that the tribe was nearing extinction. Ecuador's government was considering taking action. The missionaries decided to reach the people quickly while there was still an opportunity.

They used their plane (which the Waodani called a “wood bee”) to drop off gifts in the remote village, and eventually landed their plane on the bank of the river nearby. Men from the tribe met the missionaries when they landed and attacked, killing all five. Life Magazine did a pictorial spread on the deaths, bringing world attention, but the families of the victims remained to serve the tribe and show God’s love.

The people of the tribe asked why the missionaries hadn't defended themselves. They had guns. They could easily have overpowered the men with spears. Rachel Saint was asked, “Why didn’t the wood bee men shoot us?”

She responded, “They came to tell you Waengongi has a Son. He was speared, but He didn’t spear back so the people spearing Him would one day live well.”

The missionaries (both the murdered and their families) did bring peace to a warring tribe. The film itself is a little cheesy, the music is sappy, and some of the acting is wooden. (Bonus for animal lovers, though: the film has monkeys, parrots, and bats.) But we're writing about the clergy in the film, and I guessed right going in.

As anticipated, the missionaries of End of the Spear earned 4 Steeples. 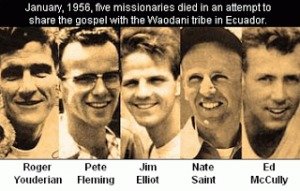 Posted by churchandstates at 9:15 PM

Email ThisBlogThis!Share to TwitterShare to FacebookShare to Pinterest
Labels: 2005, missionaries