Missionary Movie Month: What the Devil? 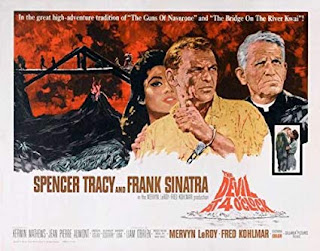 The Devil at 4 O'Clock (1961)
Yes, the priest’s drinking is worrisome. As is his violent temper. And his lack of faith. But what really bugged me was his begging.

In this 1961 film, Spencer Tracy plays Father Matthew Doonan, a missionary on the (fictional) island of Talua in French Polynesia. Directed by Mervyn Le Roy, based on a novel by Max Catto (Mister Moses) it's a disaster film with one of the most cinematic natural disasters: a volcano.

Father Doonan has been serving on the island for 16 years. His ministry began well; many of the French transplanted to the island attend his church and he wins many native converts as well. But something went wrong, and when the film begins, his ministry is no longer prospering. We see him wake in the morning and begin his day with a drink. Early in the film, we see him shoving an official. His disregard for the Mass disturbs Father Joseph (Kerwin Mathews), the priest who has come to Talua to take Father Doonan’s place.

But what really bothered me was seeing Father Doonan go from business to business, house to house, begging for things for the hospital. He asks for money, of course. But he begs a woman for clothes. And a barber for dirty magazines. He persuades some to give, but they mock and insult him along the way.


Asking for money comes up a lot when you talk to people about what bugs them about churches and ministries. Jesus received money from people for His needs and His ministry, but we don’t see him pleading for money. George Muller, a famed evangelist who ran orphanages, committed himself to ask only God for money and provisions, never people.

Father Doonan begs because he really cares about the hospital up the mountain. We learn that the hospital led to the downfall of his ministry in town. 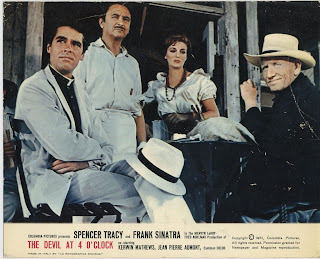 The hospital is for children -- children with leprosy. (The hospital's doctor clarifies that the disease, a dark secret on the island, is properly called Hansen’s disease.) Tourism is one of the island's primary sources of revenue, and leprosy isn't exactly something that draws tourists. When Father Doonan began the work at the hospital, the people in town began to shun the church. That’s when the priest began to drink. And apparently, beg.

We hear this story about the hospital from the doctor, an atheist who used to argue faith with the priest through the night, but the priest's life has begun to fall apart. He seems to have lost his faith. The doctor says, “I had to watch a good man, not a saint, but a good man, crumple apart at the seems… Drunk, crazy, awful temper… He is a great man.”

Father Doonan tells Father Joseph, “I’ll bring you together with some of the noble Christians of the town, the loyal brethren,” but Father Joseph wasn’t alone on the plane that brought him to the island. Three convicts on their way to prison in Tahiti were on the plane, and because the pilot takes a break on the island to see his girlfriend (he has a different girlfriend on every island), the convicts are available to do work at the hospital.

Did I mention that one of the convicts, Harry, is played by Frank Sinatra? He’s the tough guy who was an altar boy when he was young, before he took to a life of crime. When someone tells Harry, “Go with God.” Harry responds, “Who’s God?” (Another convict suggests, “He’s a way to swear.”)

So what changes things around for Father Doonan? What brings him back to faith?

All it takes is a volcanic eruption which threatens the children of the hospital. Father Doonan prays for someone to help him rescue the children, and the convicts prove to be the answer to that prayer. The priest apologizes to God for his lack of faith. The journey to save the orphans brings the convicts to faith.

What kind of Movie Churches Steeple rating should Father Doonan get? That drinking and fighting (he nearly strangles Ol' Blue Eyes to death) and begging -- especially the begging -- lose Father Doonan a steeple, but he still earns 3 out of 4 for being willing to sacrifice everything for those leper children.
Posted by churchandstates at 7:38 AM