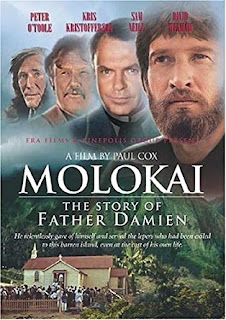 This month, I set out to write about movies with missionaries, not movies with lepers -- yet for the second week in a row, I'm writing about a missionary who founded a ministry to people with Hansen's Disease. Unlike last week's film (The Devil at 4 O'Clock), this week's story is a true one.  Molokai is the story of Father Damien, a Roman Catholic priest who went to the Hawaiian Island of Molokai in 1864. The island was the home (or, more accurately, the prison) of people suffering from leprosy (Hansen's Disease), which casts a dark shadow even in Bible stories.

I haven’t written about many Belgian films in this blog -- mostly because there aren’t many. But it makes sense that a Belgian company would want to make a film about Father Damien, a Belgian saint. (The director, Paul Cox, was actually Dutch. The film was made on location in Hawaii with an English-speaking cast. David Wenham, who plays Damien, is Australian. Still, the money that made the film was Belgian.)

The 1999 film begins as governing officials of the Hawaiin islands are discussing what should be done about the problem of leprosy. To prevent the spread of the disease, all those afflicted are to be sent to the Kalaupapa peninsula of the island of Molokai, and they may never leave the island (the disease was incurable at the time). The Catholic Bishop (Leo McKern) of the islands is included in the meeting, and he is concerned about the souls of the diseased. He asks the Prime Minister (Sam Neill) for permission to send priests to the island to administer last rights, and that permission is granted.

Four priests volunteer for duty on Molokai, and Father Damien is chosen to be the first to go. The bishop gives him priest very specific instructions: he is to prepare his own food to avoid infection. He is to keep his distance from the afflicted. He is never to touch anyone with leprosy.

Father Damien is not very good at following the bishop's instructions. At the first mass he performs, a young leper boy asks if he can serve as an altar boy -- as he served before he was sent away from his home because of his leprosy. Damien agrees and asks the boy to shake his hand to seal the deal. 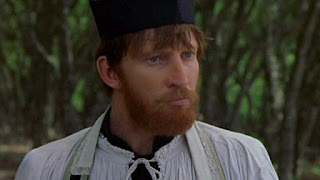 Even though he's not good at following his bishop's instructions, he is very good at following the example of Christ Jesus, who (according to the Apostle Paul in Philippians 2) “being in the very nature of God, did not consider equality with God something to be used to his own advantage; rather he made himself nothing by taking the very nature of a servant, being made in human likeness and being found in appearance as a man, he humbled himself by becoming obedient to death -- even death on a cross.” Damien goes to serve the lepers, willing to become one of them, even if it means he will succumb to the disease.

Damien looks to serve all who live on the Kalaupapa peninsula, even if they don't want to become Catholic. He befriends William Williamson (Peter O'Toole), an old man who camps on the beach and a confirmed Protestant. Williamson contracted the disease by tending the wounds of lepers, cleaning and bandaging their sores (“I was a medical assistant in Honolulu, and I got the blasted disease myself. Let that be a lesson to you.”) Some of the best dialogue of the film comes from the conversations of these two men.

Father Damien tries to convert the old man asking, “May I give you the sacraments?”

Williamson replies, “Me? A proper Catholic priest? My father would rise from the grave. Father, don’t be insulted. Come back tomorrow, I may be frightened and have to think about it.”

When Williamson nears death, the two discuss the afterlife. Williamson says, “I suppose it would be easier for you if I just died?”

Damien responds, “Oh, you can’t die until I convert you.”

Williamson asks, “Do you honestly believe only Catholics go to heaven?”

Damien answers, “I’m not absolutely certain, but I know that Catholics can go to heaven.”

Williamson dies, having refused to Last Rites and telling Father Damien, “No. I’m the one that got away. Don’t worry, I’ll say a good word for you on the other side.”

Damien is not presented as a perfect man. He doesn’t believe the church or the government give the lepers the support they deserve, as each institution gives a little and shifts the blame to the other. He particularly is annoyed by the government's refusal to let him leave the island in order to make confession to another priest. At one time, he must resort to going out on a boat and shouting his confession to the Bishop on a ship. (The story of this at-sea confession becomes a scandal in the newspapers.)

In the 1800's, some believed that leprosy was one of the later symptoms of syphilis. When Damien is found to have leprosy, he is accused of being unfaithful to his vows of chastity. He angrily responds that he has never been with a woman, adding, “or a man.”

Father Damien has times of whether God is caring for him or the leper colony. (He’s in good company with these dark feelings -- what St. John of the Cross called “the dark night of the soul.” Jesus Himself cried out, “My God, My God, why has You forsaken Me?”)

The Church is not portrayed as perfect in the film, but when no other organization was willing to care for the lepers of Molokai, the Church stepped in. So we give the Church in this film our highest rating of 4 Steeples. Father Damien himself, of course, also receives 4 Steeples. We just wish we could give him more.
Posted by churchandstates at 8:43 PM