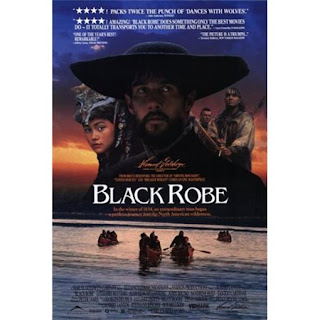 Black Robe (1991)
Black Robe has long been one of my white whale films. Some films are exceedingly easy to view -- Charade and Night of the Living Dead no longer have copyright protection, so you can watch them on cable or even on YouTube or pick them up at the dollar store. Some films, though, aren't available on any streaming service and have never been made available on DVD or video. Most films fall somewhere in between.

Black Robe came out in 1991 and was directed by one of my favorite filmmakers, Bruce Beresford. He first reached prominence as a part of the Australian New Wave with Breaker Morantdriving, one of the greatest courtroom dramas. One of his films, Driving Miss Daisy, won the Academy Award for Best Picture, though he wasn’t nominated for Best Director. And he directed what may well be the best film ever made about the Christian experience, Tender Mercies.

Not only that, Black Robe was about a topic readers of this blog might guess would be of interest to me. (I guess you don’t really need to have read the blog, just its title.) This blog was made for stories like this film about a missionary priest, but it's taken me nearly thirty years to watch this film.

When it opened, back in the day, it didn’t play in a theater near me -- and it wasn’t in theaters for long. It hasn’t played much on TV and isn’t available on any streaming services. The DVD has been available for years, but I can only justify so many DVD purchases for this profit-free blog. But as I was getting ready for missionary movie churches month, I found Black Robe at the public library.

Brian Moore wrote the screenplay for this film, based on his own novel. The story opens in Quebec (New France) in the 17th century (1634 to be precise). Father Laforge, a Jesuit priest, came to serve in a distant Huron mission, 1500 miles from Quebec. 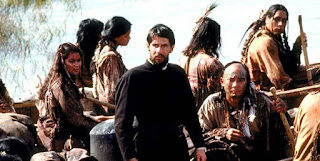 Laforge is to be assisted on the journey by Daniel, a lay assistant who knows the Algonquin language better than the priest. They travel with a group of Algonquins who serve as guides and canoe paddlers. Daniel is promised an opportunity to study in Europe in return for his assistance on the mission.

Daniel says he wants to go on the journey for “the greater glory of God,” but he is unsure about the necessity of the mission. He believes the natives are already “true Christians” who live in harmony and have their own vision of the afterlife. In spite of these doubts, he joins Laforge on the journey.

Laforge is warned about what may be in store on the journey. Previous missionaries have been attacked by hostile tribes. Some were killed and some were mutilated. Traders warn the priest of the dangers. “Priests have had fingers cut off. Or they may cut off something even more useful.” (This statement was followed by lewd snickering).

The journey to the Huron village is hazardous, with physical and spiritual obstacles. Daniel falls in love with one of the Algonquin women, Annuka. Laforge spies the two making love in the forest. Laforge confronts Daniel and admits that he too struggles with the sin of lust.

Laforge has wage disputes with his Algonquin guides. The weather and the elements are daunting. But the greatest danger is when the group is captured by an enemy tribe.

There is no doubting Father Laforge's courage. He is willing to put his life on the line for the sake of the Native Americans. Viewers of the film, however, must wrestle with the question of whether the Native Americans need saving. Is Daniel right? Are they already true Christians? Modern viewers are likely to be uncomfortable with the idea that people need the unique Gospel of Jesus Christ.

Father Laforge does make it to the mission. He finds one priest dead and another sick, but the Huron people are willing to listen to the new priest if he will baptize them (which they believe will heal sickness).

Father Laforge accomplishes what he set out to achieve. The novel was based on fact, and a priest did indeed reach the Huron Mission. The final title card of the film says this: “Fifteen years later, the Hurons, having accepted Christianity, were routed and killed by their enemies, the Iroquois. The Jesuit mission to the Hurons was abandoned and the Jesuits returned to Quebec.”

I was happy finally to get to see this film, but sadly, I can’t give Father Laforge our highest Movie Church rating. I admire his willingness to sacrifice everything for the natives of North America, but he doesn’t seem to be willing to truly understand them. So we’re giving Father Laforge 3 out of 4 Steeples.
Posted by churchandstates at 7:03 AM