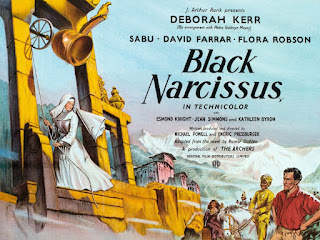 First things first: Black Narcissus is one of the most beautiful films ever made. Michael Powell and Emeric Pressburger, the team of directors, made this and a number of other films noted for vibrant colors, striking imagery, and creative framing. This film won Oscars for cinematography and art direction. Though filmed in a studio, the matte paintings of the Himilayas used in the film are magnificent.

But since the beauty of a film is not our concern here at Movie Churches, we think the important thing is that Black Narcissus is about nuns. Anglican missionaries from the Convent of the Order of Sisters of Mary in Calcutta go to the mountains to establish a school, hospital, and church in a palace formerly used by a local ruler to house his harem. The nuns were invited by General Toda Rai (Esmond Knight), partially for the education of his son (Sabu) who will eventually take his place as leader. 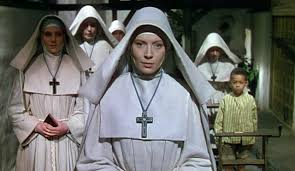 Sister Clodagh (Deborah Kerr) is appointed Sister Superior to direct four other nuns: Sister Phillipa (Flora Robson) the gardener, Sister Briony (Judith Furse) to run the infirmary, the popular Sister Honey (Jenny Laird) to teach, and the unwell Sister Ruth (Kathleen Byron) to teach as well. If I were just writing about the nuns' interaction with each other, there would be plenty of material. There would also be plenty to say about the nuns' interaction with the locals.
The General’s agent, Mr. Dean (David Farrar), tells Sister Clodagh that the people living in the area are like children. Sister Clodagh readily agrees, “They’re like unreasonable children.”
If I wanted to write about the ugly way the nuns infantilize the natives and the racism that leads to it, there might be fertile ground. But it’s December and I really need to write about Christmas. Thankfully, for my purposes, a crucial scene in the middle of the film takes place on Christmas Eve. 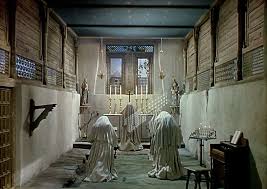 The sisters are celebrating with a worship service. After we hear them singing "The First Noel," they sing "Lullay My Liking" -- a rather strange carol based on a Middle English lyric. In the song, Mary is singing to her infant, “Lullay my liking, my dear Son, my Sweeting; Lullay my dear Heart, mine own dear Darling, I saw a fair maiden sitten and sing; She lulled a little child, A sweete Lording, Lullay my liking.” The song reminds Sister Clodagh of her days as a young woman in Britain, and the spoiled affair with a young man that led her to become a nun.

Then Mr. Dean and the young general stop by to pay their respects.

The young General says to Sister Clodagh, “Sister, may I congratulate you on the birth of Christ?”

“I am very interested in Jesus Christ,” the General says, but he sees that he somehow offended the nun, “Did I say something wrong?”

Sister Superior tells him, “No, but we usually don’t speak of Him so casually.”

It’s Mr. Dean, the General’s agent, who responds to the nun's absurd statement appropriately, “But you should! You should speak of Him casually, and He should be as much a part of your life as daily bread.” 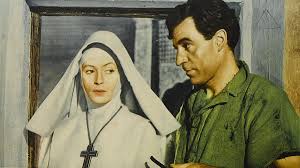 Unfortunately, Mr. Dean has obviously been drinking more than a little.

Sister Superior scolds him, “How dare you come here like this tonight? You’re unforgivable! You’re objectionable when sober, and abominable when drunk. If you have a spark of decency, you won’t come here to us again.”

I know, I know. Who has ever heard of anyone drinking during the holidays? The Sister seems to be quite taken aback at the concept.

I am much more appalled by Sister Clodagh's theology and her failure at evangelism. A man -- a leader in the community she and her Sisters have come to serve -- comes to her and expresses an interest to hear more about Jesus. Instead of taking advantage of this opportunity to share the Gospel, theoretically the reason she traveled thousands of miles to be in this place, she scolds the man for his manners.

And Mr. Dean is right. Of course, Jesus should be a daily part of her conversation. But she seems to think the name of Jesus should be reserved for homilies or some such nonsense. Her self righteous attitude about Dean’s drinking is also something that the Man who turned water into wine would not appreciate.

Just from that Christmas Eve Service and the Sister Superior's treatment of a member of the community (and Mr. Dean, the Englishman), it is quite evident that her ministry will fail. If you can’t show love and grace at Christmas, what will you do the rest of the year? 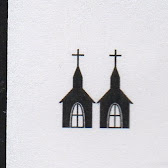 Critics through the years have given Black Narcissus the highest of ratings. But the best rating we can give Sister Clodagh and her Sisters, even with generous Christmas Spirit, is a Movie Church rating of Two (of a possible four) Steeples.
Posted by churchandstates at 7:18 PM