Christmas Cameos Show Up Again: My Night at Maud's 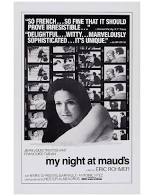 In the 1975 noir film, Night Moves, detective Harry Moseby (Gene Hackman) gives this bit of cinematic criticism, “I saw a Rohmer film once. It was kind of like watching paint dry.”
This week’s film, My Night at Maud’s, is written and directed by Eric Rohmer. I’ll admit nobody would confuse it with Die Hard for excitement, but it does share the same seasonal setting: Christmas.

The film opens with a man going to Mass. He notices a pretty woman and tries to follow her when the service ends. He quickly loses her in on the Christmas decorated streets. That man, Jean-Louis (Jean-Louis Trintignant), says in a voice-over, “On December 21st I knew without a doubt that Francis would be my wife.” 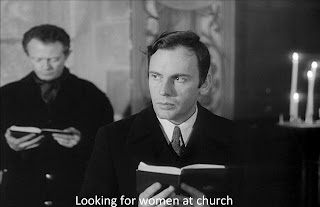 The film takes a while to introduce Jean to Francis (Marie-Christine Barrault). In the meantime, we learn he is an engineer who has taken an assignment in Clermont-Ferrand, a city where he believes he is a complete stranger. But when he visits a bookstore, he encounters Vidal (Antoine Vitez), a friend from college. Vidal invites Jean to a concert and then they go to dinner. In their conversation, we learn Vidal is a Marxist, and the two venture into a prolonged conversation of the philosophy of Blaise Pascal, particularly “Pascal’s Wager.” (In the bookstore, both men had examined Pascal’s classic work, Penses.)

Here’s where Moseby’s criticism comes into play. Can you imagine a Hollywood blockbuster taking a ten-minute break to discuss the views of a mathematician, philosopher, and theologian who'd been dead for three hundred years? (Admittedly, Woody Allen used to give time for discussions of Kierkegaard, but he spent two minutes, tops.) But I found the discussion intriguing. If you don’t know Pascal’s proposition, it’s basically this: A rational person will choose faith in God and live for Him. If God does exist, that person will reap infinite gains for the “wager” and lose out on only a few earthly pleasures. If the person is wrong and death is the end, little has been lost by “betting on God.” But if the person instead bets that God doesn’t exist, there is only the chance of gaining a few earthly pleasures, along with the risk of eternity in hell.  Betting that God doesn't exist is a foolish wager. 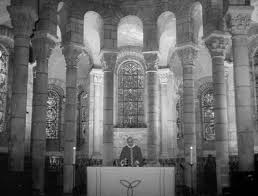 I found their conversation intriguing, partly because it is the atheist, Vidal, who takes the side of Pascal while Catholic Jean-Louis argues against it. Jean-Louis thinks an argument for faith on purely rational grounds is somehow objectionable.
Jean-Louis says, “I’m a Catholic, at least I try to be, but he doesn’t fit my notion of Catholicism. It’s because I’m a Christian he offends me. If that’s what being a Christian is, I’m an atheist. What I don’t like about Pascal’s wager is the calculated exchange, like buying a lottery ticket.”

Vidal adopts the argument to his Marxism, saying, “I’m a Marxist, so Pascal’s wager is important to me. I must choose to believe life has meaning to have a chance at meaning.” He must act as if the Worker’s Paradise will be an actuality, even if he doesn’t see proof of it, because his work might make such a thing possible. If it isn’t possible, he will never know his work was in vain anyway. 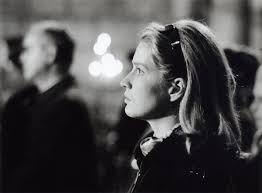 The next night is Christmas Eve, and the men agree to meet for the Midnight Mass. In his homily, the priest proclaims, ““Christmas is a living joy. It’s not just the birth of Jesus Christ, it’s our birth. Believe in a new fervent joy. This is the core of our hope.” After the service, Jean-Louis agrees to go with Vidal to the home of his friend, Maud (Francoise Fabian).

Maud’s home is decorated with lights and a Christmas tree. Maud’s young daughter comes out for another look at the decorations before going back to bed. The conversation goes back to religion. Maud tells of her background, “I was never baptized. I was from a family of free thinkers.” She still isn’t a Christian because “one thing I dislike about the church is the bookkeeping aspect of good deeds vs. sins.”

It is interesting that the priest, when Jean-Louis next visits the church, seems to answer this objection. Unfortunately, neither Maud nor Vidal is with Jean-Louis. The priest preaches, “Christianity is not a moral code, it’s a way of life, an adventure. The most splendid adventure of all. Many are afraid of the progression to holiness, but one must have faith in Jesus Christ our Lord, a faith that reminds us that God loves us.”

Someone else is at that service: Francis (Francoise in French). Jean-Louis is finally able to introduce himself to her, and the two are able to pursue the adventure of following God together.

I don’t believe Alan Sharp, the screenwriter for Night Moves, really thought Rohmer’s films were dull. There is enough similarity between their work to think he may well have been a fan (even more in common than the use of “Night” in their titles.) And there is much more to My Night at Maud’s than I'm writing about here. There is much more to the relationships between the characters and unexpected connections. If you haven’t seen the film, I encourage you to seek it out. If watching this film is like watching paint dry, I really must give watching paint dry a chance.

As for our Movie Church ratings, I give the priests and churches of My Night at Maud’s our highest rating of Four Steeples.

Posted by churchandstates at 7:28 PM