I'm not making a Top Ten Film list this year. Usually, by this time of year, I've seen 50 - 70 films, half of them in a movie theater. From those films, I easily found more than ten films I liked and respected enough to put in a top ten list. The challenge was to narrow down the list to just ten films I thought were important, fun, and rewatchable.

2020 was 2020, and fewer films were released. Many films that looked good were scheduled to be released this year, but most of them have been postponed until 2021 since theaters weren't open this year (in most places most of the time). Some of those will end up streaming next year, but they were held back in the hope they’d get a theatrical release in 2021.

So, frankly, the films I’ve seen this year haven’t been that great. The only film I’m sure would make my top ten list in a usual year was Pixar’s Soul, which debuted on Disney Plus on Christmas Day. It was unique, funny, imaginative, and thoughtful. I wish it had a church because I’d love to write a post about it and what it has to say about life’s purpose.

But there was still joy to be found in film this year -- even in going to the movies. So instead of my favorite films, I’m writing about my five favorite movie outings this year.


In the Before Time: Weathering With You (January 15 - AMC Pacific Place, Seattle, WA)

Before we knew the virus would be stealing much of our freedom, I went to the movies without thinking it was anything special, and I saw some holdovers from 2019 (such as 1917 and Just Mercy).
I managed to see one newly-released film before things started shutting down: Weathering with You. It’s a Japanese film that came out overseas last year and debuted in the US in 2020. My wife and I went with our son, one of our daughters, and our son-in-law. All of them are much bigger anime fans than we are, but I liked it too. Maybe it would have had a shot at my top ten list. But I look back on it now for the joy of watching a movie inside -- without masks -- with my family. 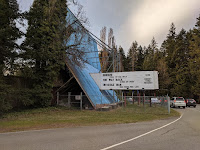 Indoor theaters were shut down already, but the drive-ins had just opened for the season. Disney/Pixar released their new animated film, Onward, not knowing where it would ultimately show in America (turns out the gross was not high). We drove an hour to the closest drive-in to see this enjoyable story of a world where fantasy figures live in suburbia. Washington state shut down drive-ins as well the next day, so we were glad we made it. (We’ve gone to this drive-in a few times again since it re-opened in the summer when we wore masks outside the car, but this was certainly the best film we saw there this year.) 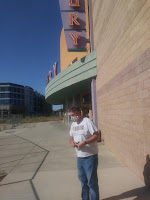 Out of State: Tenet (September 8, Century Park Lane 16, Reno, NV)
I am a big fan of the filmmaker Christopher Nolan (Memento, Inception, Dunkirk), and he rather boldly pushed for his newest blockbuster, Tenet, to be released in theaters in September. It was a gamble, and one I wanted to support. But unfortunately, Washington theaters were still closed, and Nolan’s type of epic is best seen on a big screen in a movie theater. Fortunately, my son and I were already planning a trip from Seattle to visit family in Santa Rosa, CA. If you’ll look at your maps, you’ll see that Reno is right on the way. (Well, maybe just a dozen hours of driving out of the way.) So that's the route we took. We wore our masks in the theater and were socially distanced. The film, best described as a Bond spy film with time travel, was definitely lesser Nolan. But I was glad to see for myself. 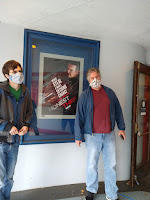 For a brief time, Washington State allowed theaters to open again. My wife, son, and I were happy to don our masks to see a Liam Neeson film wherein Neeson played a man with a “special set of skills” that he uses against ner-do-wells. Fortunately, it was as formula-bound and comforting as we hoped. We were happy to see yet another version of Taken. 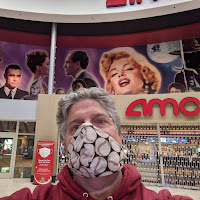 That brief opening didn’t last for long, so when Governor Inslee announced theaters were closing again at midnight Monday, I went twice by myself, Saturday and Sunday. First I saw Let Him Go, a brooding, violent film with Kevin Costner playing the Liam Neeson role, and the next day I saw Freaky, which was like a remake of Freaky Friday but with a serial killer. Both films were justly rated R, and would not have made my top ten list in an ordinary year, but me and my free popcorn (from theater chain promotions) had a good time.

I do hope that in 2021, a proper list of top ten films will be a possibility, and I also hope that I'll have seen most of them in a movie theater instead of my living room.
More pictures from the Rodeo Drive-in: 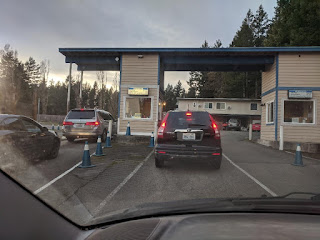 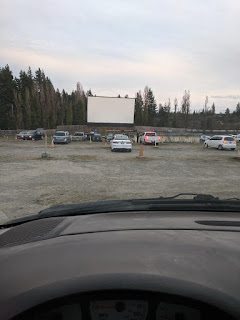 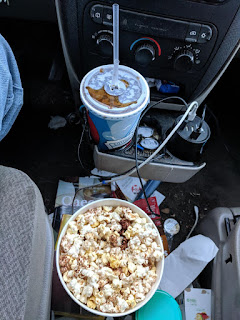 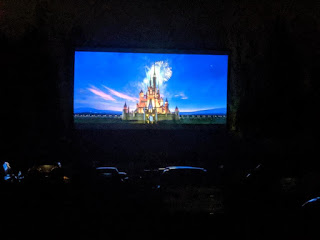 Posted by churchandstates at 6:42 PM