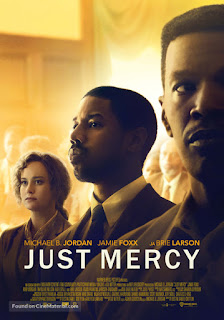 Just Mercy (2019)
What would you choose as the very last song you’d ever hear?

Probably most of us would rather not need to answer that question, but in Just Mercy, Herbert Richardson (Rob Morgan) chooses Ella Fitzgerald’s version of “The Old Rugged Cross” before being executed in the electric chair by the state of Alabama.

This isn’t an isolated moment of religiosity in the film. It's based on the true story of Bryan Stevenson (Michael B. Jordan) and his career as founder of the Equal Justice Initiative, an organization founded to provide legal assistance for those convicted of crimes without adequate legal representation. The film particularly focuses on the case of Walter McMillian (Jamie Foxx), a man unjustly convicted of murder in 1988 in Monroeville, Alabama (rather ironically the home of Harper Lee, author of To Kill a Mockingbird).

Throughout the film, it seems that many of the best traits of its characters (faith, hope, compassion) are rooted in by their upbringing in the church. We see Stevenson as an intern during law school meeting with a death row inmate for the first time. The two men bond over their background in music -- one playing the piano, the other singing in a choir -- in AME churches.

McMillian should have been able to escape charges immediately. A church fish fry provided an alibi, but the local law enforcement and the legal system took the word of one white criminal over the word of a score of African American churchgoers willing to testify to his innocence.


But this site is all about clergy and churches, so how are they portrayed? Both make a brief appearance in the film. At Richardson's execution, we see a white clergyman in a collar (possibly a Roman Catholic priest?), but we never hear him speak. He seems to be an odd choice of clergy, but possibly Herbert has no other connection to a church or clergyman. (He also has no family; he asked Stevenson -- his lawyer -- to be there for him at his executions.)

We do see one glimpse of a church. Stevenson attends a joyous service at the McMillian’s home church. The service is full of joy and celebration during one of the darker times of the McMillian family journey.

Therefore, we are giving the McMillian’s church in the film, and the depiction of Christ’s Church, our highest Movie Church rating of Four Steeples.

Posted by churchandstates at 3:11 PM

Email ThisBlogThis!Share to TwitterShare to FacebookShare to Pinterest
Labels: 2020, In theaters now