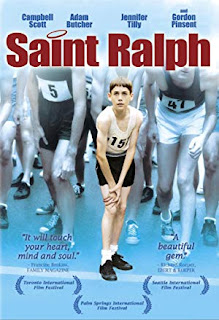 In the Universal 1941 musical, Hellzapoppin', there's a movie studio called Miracle Studios ("If it's a good picture, it's a Miracle!") and Three Amigos uses the same joke. So many things need to come together to make a good movie that every one is a bit of a miracle, making this small film, 2004's Saint Ralph, a bit of a miracle. But as usual, we aren't here to judge the movie but rather the churches and clergy in the film.

Saint Ralph is all about the making of a miracle. It also features two priests who take very different approaches to miracles.

Ralph (Adam Butcher) is a 15-year-old student at a parochial school in Canada in the early 1950s. His father died in World War II, and his mother is very ill. When his mother slips into a coma, Ralph is told it will take a miracle to save her. Ralph sets his mind (and heart) on making the miracle which will lead to lead to his mother’s healing. As he has just begun cross country running, he decides that his miracle will be winning the Boston Marathon.

Ralph’s Religion teacher is also his cross country coach, Father George (Campbell Scott). Ralph asks about the requirements for a miracle, and Father George tells him that three things are required: faith, purity, and prayer. He is told that faith means you must truly believe even though this sometimes makes no logical sense (the great Catholic philosophers and theologians such as Augustine and Thomas Aquinas would disagree). He is told that in prayer he must be in direct communication with God (unlike Mother Teresa who spoke of the dark night of the soul or even Christ Himself who cried out, “My God, My God, why have You forsaken Me?”). Purity is described as being completely free of sin. So Ralph purses not only his running skills but also these three pious elements. 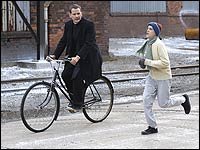 Father Fitzpatrick (Gordon Pinsent), the school’s administrator, opposes Ralph’s pursuit of a miracle. Just as Jesus scoffed at those who pursued signs and wonders, he forbids Ralph from pursuing his miracle. His goal for his students is for them to be content with their lot in life, and he doesn’t want Ralph to have to deal with what he sees as the inevitable discouragement of striving for something better, especially the miraculous.

This tension between those who pursue and those who discourage the pursuit of the miraculous is very real in churches. But you might not be surprised to find that the movie leans toward the miraculous -- because that is so much more cinematic. As for the priests, neither really manages to strike the Biblical balance of trusting God’s sovereignty seen in both the natural course of events and in the unexpected surprises we call miracles.

The film does illustrate one other often-overlooked bonus of church life: the merit of Mass (or any worship service, really) as a date. Because Ralph is caught in an embarrassing, public act of “self-abuse” (as the film calls it), the father of the girl he is interested in refuses to allow his daughter out on a date with Ralph. But they can meet at church, which they do during Holy Week. They even hold hands during Mass. In my book bars and Christian Mingle will never hold a candle to that place where they light candles -- when it comes to meeting that special someone.

(This post first appeared in our blog, Dean and Mindy Go to Church, before I was rating churches in movies with Steeples. Who knows what I was thinking back in 2015?)

Posted by churchandstates at 9:48 PM