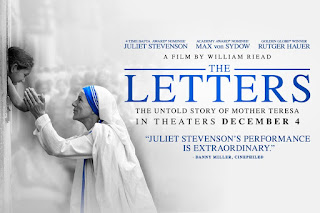 The Letters (2014)
Spoiler: If you read these reviews of clergy and churches in films in great suspense, wondering what rating will be given, skip to the next paragraph, because I’m going to reveal the rating right now. I’m going to say right up front here that the clergy member in The Letters will receive our highest rating of Four Steeples. This is a film about a woman I’ve always admired greatly: Mother Teresa.

In 2014, William Riead wrote and directed this story of one of the most famous religious figures in the 20th century, and he cast Juliet Stevenson in the central role. The film examines the life of the Nobel Peace Prize winning nun through the eyes of a priest, Father Celeste (Max von Sydow), charged with investigating Mother Teresa’s life for consideration for sainthood. His primary tool is a stack of letters written to various people throughout her life. 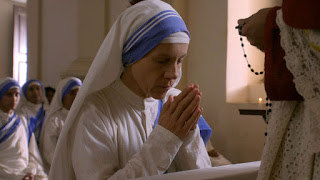 Teresa grew up in Macedonia, but the film opens with her as a novice nun with the Sisters of Loreto in Ireland. She is given a ring, a sign of her devotion to Christ, and then she lies prostrate in prayer in the midst of the congregation. She then goes to Dangram, India, to serve as a teacher to young women in a convent school. It was a time of great unrest between the Hindus and the Muslims. One of Teresa’s students comes to her and asks if she is afraid, but Teresa urges her to trust in God. 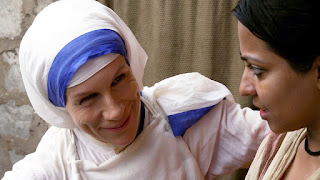 Most of us would think going to India would in itself be service enough. But after serving for many years in India, while riding on the Darjeeling Unlimited train, she heard the voice of God calling her to serve the poor. The young women she taught at the time all came from well to do families. Teresa asked her Mother Superior for permission to serve the lower caste of the city, “I love teaching, I love being a nun, but I must do something. Surely God loves the poor outside of these walls as much as he loves the privileged girls within these walls.” She even quoted the Scriptural injunction “do not forget the poor,” but the Mother Superior refused her request because going outside the convent walls would violate the rules of their order.


Teresa’s request for permission to serve the poor had to work its way through all the church beurachracy up to the Vatican, but in 1948, she was given permission to go out to serve the poor in the slums. There she worked as a teacher again, but the children had no other schooling available. Some of the parents worried she was there to convert their children to Christianity. “She will teach them about her God! That is why she is here!”

She tried to assure them, “I am not here to convert your children to my faith. I am only here to serve them.”
One of the parents defended her, “She has not once brought up her religion, only how to read and write.”

Teresa said, “I may not be wanted here. But I am needed.” So she concentrated on teaching orphans, using rocks to write the alphabet in the dirt.

Eventually, she won the trust of the people while living in the slums and bringing in a dozen other sisters to work with her. Along with teaching they began to serve those with medical needs, and care for orphans. Eventually, she established her own order, the Missionaries of Charity, which now includes over a thousand sisters serving in over a hundred countries.

But there is more story. Mother Teresa’s personal spiritual life was revealed in those letters. For years she dealt with growing darkness in her heart and mind. “I have been experiencing doubt, loneliness, the temptation to go back to Loreta. I want to do whatever is Your Holy Will.” Though her letters to her spiritual advisors became darker and darker, she continued to be cheerful in her day to day life. She came to consider that darkness an essential part of her vocation serving the poorest of the poor.

So back to that Movie Churches rating. There have been those through the years, particularly men like Christopher Hitchens who criticized her for opposing abortion. Just going with what we see in the movie, Mother Teresa showed the love of Christ to those who suffered greatly. The nun of this movie deserves Four Steeples. (I believe the real Mother Teresa has already received from Christ the best praise of all, the words, “Well, done good and faithful servant.”)
Posted by churchandstates at 11:10 PM