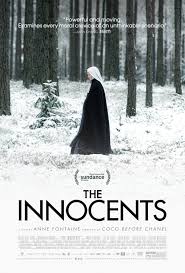 Les Innocentes (2016)
Hey, I don’t just watch movies, I read sometimes. I recently read The Last Battle, a history of the fall of Berlin by Cornelius Ryan, which followed the stories of residents of the Nazi capital as they awaited an invasion: from the West, primarily the Brits and Americans, or the Russians from the east. A small band of underground Communists hoped for the Russians, and a convent of nuns dreaded the Russians approach. The nuns’ fears were justified.

The Russian army ravaged the lands they passed through, stealing from civilians, killing anyone suspected of collaborating with the Germans, and -- most notoriously -- raping women. When Milovan Djilas, a Yugoslavian politician, accused the Soviet army, Joseph Stalin responded, “Does Djilas, who is himself a writer, not know what human suffering and the human heart are? Can’t he understand it if a soldier who has crossed thousands of kilometers through blood and fire and death has fun with a wench and takes some trifle?” 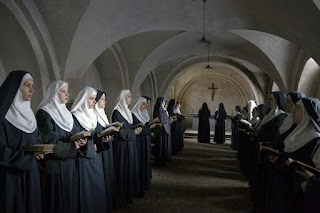 2016’s Les Innocentes is a fictional story, but it is based on the history of the atrocities of the Soviet army in World War II. Unlike the book I read, it’s set in Warsaw, Poland. In December of 1945, Mathilde (Lou de Laage) is a student doctor working with the French Red Cross to help released French prisoners of war. A nun named Maria (Agata Buzek) tells her about a woman at the convent with a troubled pregnancy. (During a scene of the nuns singing worshipfully, a woman’s screams can be heard in the background.

Maria isn’t telling the whole truth. It takes time for Maria to admit that the woman enduring a breach birth is a nun -- and that there are seven other pregnant nuns in the convent.

Months before, a division of the Russian Army had camped out near the convent. For over a week, soldiers came three times a day and raped the nuns, young and old nuns. Along with the pregnancies, some of the nuns, including the Mother Superior, contracted venereal diseases. Nonetheless, the Mother Superior is quite upset that Maria brought the doctor to the convent. She wanted to keep their situation secret. (“You’ve broken the rule of obedience, Maria”.) 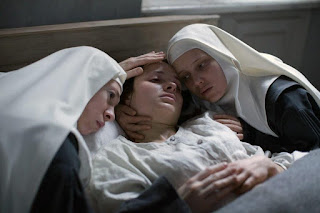 The nuns share her fear that if the people around the convent know their situation, they will judge the nuns as immoral. The Reverend Mother explains, “People will reject them, many will die. My duty is to protect them.” The Communist rulers who despise the Catholic faith offer no help, so the nuns believe they are on their own.

But Mathilde, though a Communist herself, continues to return to the convent to care for the nuns. Even examining the nuns is challenging, because they believe their vow of chastity forbids being seen without their clothes...let alone being touched where an obstetrician needs to touch them in an exam.

And, of course, there is the problem of where to take the babies. The Reverend Mother says that she has found homes for the children, but we learn that she is instead, “trusting the children to God” and abandoning the infants by a cross in the woods. 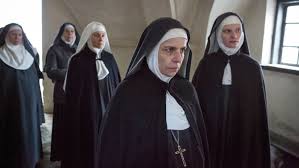 The horror that the nuns experienced is, of course, a test of their faith. One nun explained, “I never had much faith, and since this happened, I lost the faith I had… I must find my fiance.” She had fallen in love with a Russian soldier who protected her from the others. After her baby is born, she leaves the convent to find him.

But most of the nuns have a faith that endures. Maria struggles to trust in God’s love, but continues her vocation and finds peace in her relationship with Christ. Mathilde receives this letter from Maria, “Dear Mathilde, the dark clouds have moved away. I know it will make you laugh, but I believe God sent you to us. May He bring you joy in your trials.”

Mathilde comes up with the idea of the nuns bringing in orphans of the war, so the newborns can be camouflaged among the other needy children. It could be argued they should have been caring for orphans prior their horrendous experience, but this horrendous experience leads them to do a good work.

It’s difficult to come up with a steeple rating for this convent. Though this is a fictional story, many real people suffered similarly. Though it’s hard to judge, they get a Movie Churches ranking of three steeples.
Posted by churchandstates at 12:57 AM