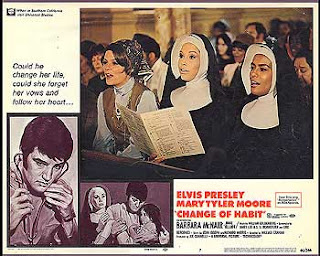 Change of Habit (1969)
Is being an undercover nun really a movie thing? This week’s film (the first for Nun Month) features a trio of undercover nuns, and at least one more film this month will feature a sister who pretends she isn’t, but really, why?

1969’s Change of Habit tells the story of three women, about to take their final vows to become nuns in the Roman Catholic Church, who leave the convent temporarily to serve in a Los Angeles ghetto’s medical clinic. They do so wearing civilian clothes, hiding their identity as nuns. Mary Tyler Moore as Sister Michelle explains, “If we’re going to reach these people, we must be accepted first as women and then as nuns.”

Okay, maybe I’m missing something, but why is it important for them to be accepted as women? I’ve seen Mary Tyler Moore in many other things, and I’ve never thought there was a danger of her being mistaken as something else, say a Pomeranian puppy or Indian Star tortoise. Is she saying nuns are something other than women? Her explanation is confusing to me (and the other two nuns seem a little surprised as well). 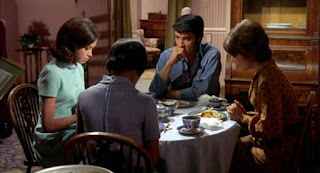 The film opens in a worship service as the Mother Superior tells the sisters they must go into the world and preach the Word. They must have been prepared, but it seems she picks three random nuns who stand as she prays for them, leaving through the chapel’s back door. In the title sequence, we see the three women go to a dressmaker for clothes and have a bit of a nun striptease as they change. It’s relatively discreet, working within the film’s G rating. I’m pretty sure that a film with a discussion of drugs and abortion along with the depiction of an attempted rape would not get a G rating today -- but it was a different time.

Anyway, Sister Irene (Barbara McNair) and Sister Barbara (Jane Elliot) join Sister Michelle to serve in a medical clinic run by Dr. John Carpenter, played by Elvis Presley. (This was Elvis’ final acting role. In his remaining films, he played himself.) The women say they are medical professionals sent by the Catholic church, but Dr. Elvis assumes the pretty young things won’t be able to cope with the realities of the inner city. He also immediately begins hitting on MTM. (Which, of course, would not happen if she was wearing her nun duds, but then where would the plot complications come from?) 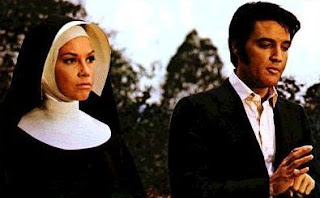 All the nuns have their own little subplots showing them trying to effect change in the big city. In the clinic, Sister Michelle provides an accurate diagnosis of autism for a little girl Dr. Elvis thinks is deaf. As a trained speech therapist, Sister Michelle also helps a young man with criminal inclinations and a stutter.

Meanwhile, Sister Barbara is in charge of setting up the women’s apartment. She flirts with men to get them to help move furniture and is shocked when they expect her to party with them. She also takes on the local bodega owner because she believes he’s cheating the locals. She makes no attempt to talk civilly about his policies (“You are a walking social injustice”), but in the spirit of the 60’s moves immediately to picket and protest.

Sister Irene goes to apartments to provide home nursing care and comes across the local loan shark, called “The Banker” (Robert Emhardt.) She decides to take him on by borrowing money to throw a neighborhood fiesta, then -- at the party -- publicly refuses to pay him back. Irene, an African American, also encounters local Black activists who disdain her willingness to work with white people. 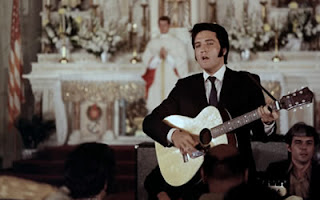 The only person in the neighborhood who’s aware of the women’s true identity is the local priest, Father Gibbons. He doesn’t approve of most of what the nuns do: abandoning the habit, letting men visit the apartment, singing secular songs, etc. He only grudgingly allows them into his locked church to pray.

In the end, of course, the women must reveal they are nuns and have to decide whether they will take their final vows. Sister Irene seems to have no doubt about pursuing her calling. Sister Barbara abandons life as a nun (but she says not her faith) to pursue social activism. And we last see Sister Michelle in church while Dr. Elvis leads in worship with the song “Let Us Pray”. She looks from Elvis to the crucifix on the wall, seemingly still trying to decide whether to be a nun or marry the King of Rock and Roll.

We have to give the nuns credit for caring for the poor in the inner city, even if they use some rather foolish methods. We’re giving them a rating of Three out of four Steeples.

A couple of unrelated bits of trivia I feel the need to tack on. This film was made just before Mary Tyler Moore began the popular sitcom named after her, and a police officer in the film is played by Ed Asner, who would play Mary’s boss in the series. Surprisingly, considering the setting of the film, Elvis doesn’t sing “In the Ghetto” even though he recorded it at this time. He does sing the title track “Change of Habit” which I don’t think I’d ever heard before and don’t expect to ever hear again, which is just fine.
Posted by churchandstates at 7:20 AM