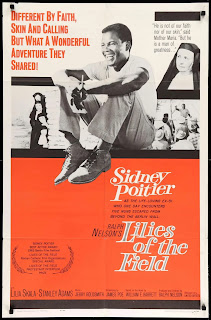 The problem with talking about Movie Churches with miracles is it's hard to get people to agree on the definition of a "miracle." Does a miracle need to break the laws of nature? Or can a miracle just be an answer to prayer? How can you tell the difference between a miracle and a coincidence?

Lilies of the Field is a movie about a church built through a series of miracles -- or a series of coincidences. The Mother Superior of a small convent in the desert prays for someone to build a chapel. In their community, there is no church building. There is a priest that travels about in a camper performing mass. The priest, Father Murphy, also prayed in seminary for a beautiful sanctuary to serve, and was disappointed in his situation.

Sidney Poitier (in an Oscar-winning performance) plays Homer Smith, an itinerant handyman who believes he is stopping at the house where the nuns live for water for his overheated car. The Mother Superior believes he has stopped to build a chapel; that he is sent by God. He knows that this is not the case because he is not planning on staying and that he's a Baptist. 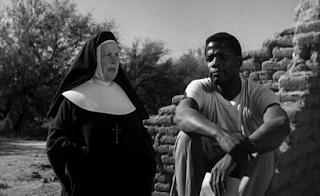 He's willing to work for pay. But the nuns really don't have money to pay him for all the work that must be done, and they certainly don't have the finances to pay for the supplies to build the chapel. So the Mother Superior prays for the supplies as well. God answers those prayers when a local construction business supplies bricks out of guilt. Certainly, there seems to be nothing strictly supernatural in the arrival of a worker and supplies, but the Mother Superior has no doubt that it is God's work.

Evaluating this movie church, I should take a moment to discuss the clergy. Father Murphy does not have the best reputation among some in the community. The owner of the local diner believes the Father loves his wine too much. The Father himself believes he's unworthy of his position. He believes his seminary prayers showed disqualifying pride. But the beauty of the new chapel reminds Father Murphy that God's grace overwhelms our sins, and it seems he will be a good priest in it. 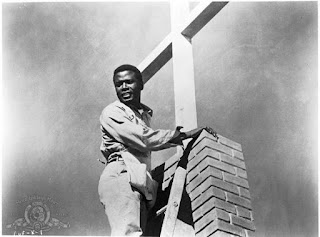 Homer doesn't only bring his architectural skills to the new church, he also brings his guitar. He teaches the nuns a gospel song, "Amen," which tells a theologically sound life of Christ. In fact, most of the theology in the film I found fairly sound. I did have a problem with one thing the Mother Superior said in the film. She says about Homer, "He is not of our faith, but he was brought to us by God; the God of all faiths." I have no problem with her saying that about Catholics or Baptists. But when you say all faiths, you're including those that had faiths that asked for infant sacrifices to Baal. I'm just not comfortable with that. (And I'll save my rant on Scientology inspired by the very good HBO film Going Clear for another week. I never did get to that.)

Psalm 127 says, "Unless the Lord builds the house, they that labor, labor in vain." The movie church in Lilies of the Field seems to be built by God. By definition then, that's not for nothing.

[Business detail: as of June 1, Movie Churches will have its own blog. More exciting details to come soon!] (And it happened. Which is why we now moving our posts from DeanAndMindyGoToChurch blog to here.)
Posted by churchandstates at 10:05 AM