Miracle Movie Month: Do You Believe? 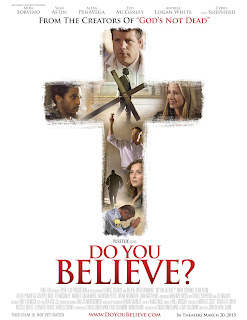 (This review was first published while the film was still in theaters.)

At the movie review site Rotten Tomatoes, one of the lowest-rated films in theaters is Do You Believe? It's rocking 19%, meaning that four out of five critics say skip this thing, so I didn't have high expectations going in -- especially since the film shares a writer with one of my least favorite films last year, God's Not Dead.

And do you know what? The film isn't very good. The movie takes the stories of twelve different characters, all facing various trials on a particular day, until all their stories come together. You might be thinking, "Oh, like the movie Crash?" Yes, the movie climaxes in a car crash.

It's not at all emotionally subtle. Silent film director D. W. Griffith would have said to the actors, "You can tone it down a bit." Steel Magnolias would comment on this film to An Affair to Remember: "It's a little emotionally over the top, don't you think?" Deus Ex Machina comments, "There were too many crazy coincidences for me."

But thankfully, we're not here to review the film, which happens to be mediocre, but the church in the film.

Last month, I was fairly harsh on the church in God's Not Dead (I will repost that review soon here), but I have to admit the church in Do You Believe? is a pretty good place.

First of all, it would kind of awesome going to church with the Six Million Dollar Man (Lee Majors), Maddie Hayes of Moonlighting (Cybill Sheppard), and NFL/B Movie Action Star Brian Bosworth, even though this church is pastored by Ted McGinley. McGinley is one of those actors that make you say, "Hey, I know him from somewhere..." It does say something about God's grace that He allows a regular from Married with Children and The Love Boat to serve Him. We see Pastor McGinley at the beginning of the film encounter street preacher Delroy Lindo taking on a gang of street thugs. Delroy then asks Pastor McG, "Do you believe in the cross?" 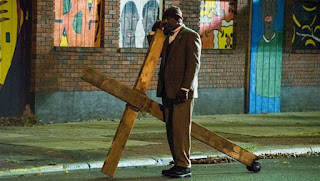 The pastor then goes home to work on the next night's sermon. His sermon notes are a little less detailed than I usually make in my preparations. His notes consist of a sketch of a cross drawn on a legal pad with the words "Do You Believe?"

He is able to take those notes and preach a fairly full sermon. He uses a large cross in the front of the church for a visual aid, painting it with red representing Jesus' blood. He gives everyone in the congregation little wooden crosses and encourages people to live out Christ's example by serving others.

And we see the congregation through the rest of the film working in soup kitchens, housing the homeless, sharing their faith. When Heath Barkley asks Jacy Farrow to take in a homeless woman and her daughter into their home, she says, "You expect us to turn our lives upside down because of a sermon?" There aren't many sermons that do such a thing. But one that does can be quite a good thing. 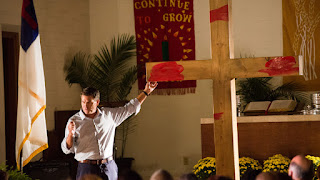 There is one morally intriguing subplot. Bobby the paramedic comes across a man at an accident scene who's dying. He does everything he can for the man medically, but there is no hope to save him -- except spiritually. He encourages the man to get right with God and gives him the cross he received at church. The dying man's wife is delayed from reaching the accident scene, and by the time she gets to her husband, he's dead. When the wife learns what Bobby did, she sues. Though like most things in the film, the dilemma is presented with sledgehammer subtlety, the situation is not neatly tied up with a bow.

There are some other good things about this church. Brian Bosworth plays a prisoner released early because of his terminal illness. The church takes him on as janitor. Good for them. During a service, Bosworth welcomes a man fleeing from the police into the sanctuary. Not standard procedure, but he says he does so at the Spirit's direction which proves accurate.

A strange thing about the church is that in the worship service we see, there seems to be no music or greeting time, just a sermon. Most people look for a little more variety in a service, but for a Movie Church, this one isn't too bad. Can't say I'd give the film a thumbs up, but the church in the film certainly deserves one.

(This post is from 2015 in the blog DeanandMindyGotoChurch before this blog began, and before I was giving Steeple Ratings. But this church would probably earn our highest, four steeple rating.)

Posted by churchandstates at 10:00 PM