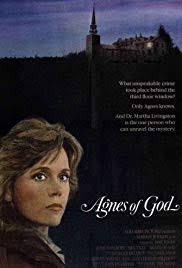 Poor definitions are just the beginning of the problems with the Movie Church/Convent in Norman Jewison's 1985 film, Agnes of God. In the opening of the film, we see what looks like an old white church with a tall steeple. A scream brings the camera within its walls, and we see a bloody, terrified nun.

We then learn the nun, Agnes (Meg Tilly), has been accused of murdering her own newborn baby. A court-appointed psychiatrist, Martha Livingston (Jane Fonda), is sent to interview Agnes. And yes, the mother superior (Ann Bancroft, a little ways from Mrs. Robinson) does indeed greet her with the words, "Dr. Livingston, I presume?"

Livingston is not greeted warmly at the convent. Some nuns, who seem to have taken a vow of silence, greet her only with dirty looks. We learn that the mother superior is opposed because she is opposed to psychiatry. Livingston accuses her of opposing science, and Mother Miriam doesn't deny it. 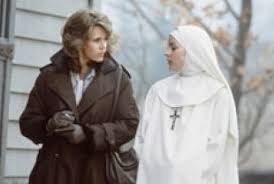 In fact, she seems to have quite the soft spot for ignorance. The nuns of the convent (excepting the mother superior and one other sister) are kept from any contact with the world. Agnes herself was raised in isolation by her mother and then sent to the isolation of the convent. Mother Miriam speaks rather approvingly of Agnes never seeing TV or a movie or reading a book, seeming to believe there is a connection between holiness and the lack of a sound mind. She says at one point, "Not all of the saints were good, in fact, some were a little crazy." This would come as quite a surprise to Saints Augustine, Aquinas, and Thomas More.

Agnes even appears to be ignorant of where babies come from. She says that "good babies come from an angel whispering in a mother's ear" and bad babies come from "demons touching a mother there and then the baby comes out of the mother's body." There is a mystery running through the film about the father of the baby. Did Agnes have a lover? Was she raped? Or was there a supernatural occurrence?

Agnes claims that the Angel Michael was the father of her baby. This runs directly counter to what Jesus said in Matthew 22:30, "At the resurrection people will neither marry or be given in marriage; they will be like the angels in heaven." But then, Agnes seems as ignorant of the Bible as she is of every book. Bible reading doesn't appear to have a place in the life of this convent.

A priest does come every week to take confession and to give the Eucharist. He stands off from the
nuns behind bars as he blesses the bread and the cup. He is the only man that is supposed to have any contact with the nuns. At night, no man is allowed on the property. Mother Superior says that after dark "Jesus Christ himself would not be allowed in," and from what I could see, He wasn't allowed in at other times, either. 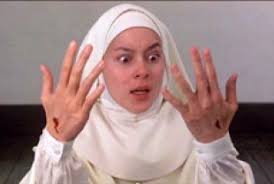 In the world of this movie church, though, natural explanations don't seem to hold. We see the stigmata break out, but nothing encouraging or holy comes from it. So I would think if it was of supernatural origin, it would be demonic rather than divine.

Do I have anything good to say about the Movie Church/Convent of this film? Well, they do have a very cool bell tower. And a secret passage. Secret passages are awesome. And at one point we see the nuns ice skating. Nuns ice skating are just adorable. Otherwise, the place earns a solid thumbs down.

(This post is from 2015 in Dean and Mindy Go to Church before this blog began, and before I was giving Steeple ratings. This convent would have received one, at most two steeples.)

Posted by churchandstates at 11:03 PM