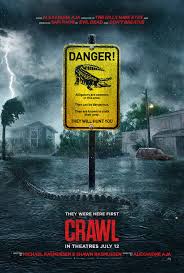 It’s still the holiday season here at Movie Churches (remember the 12 Days of Christmas began on the 25th), so we’re taking a break from the usual format. For this week we are not evaluating churches and clergy in films, but just looking back at new movies released during 2019. I’ll start with my ten favorite films of the year, then my five least favorite. With a nod to our usual content, I'll tell you the best church in a 2019 movie, and then -- if you're still reading -- all the 2019 films I saw this year in theaters, streaming, or on DVD.

Top 10 Films Released in 2019
#10 - Crawl If you see just one 2019 movie about alligators loose in a hurricane, make it this one. I like scary movies, and this one has good jump frights with a touching father/daughter story as a bonus.
(Rated R for violence and language)

#9 - Unplanned I try to put a Christian film on the "good" list when I can, but it's usually difficult because Christian films are so often very awful. This film -- about a woman who worked for Planned Parenthood with enthusiasm but who comes to understand the dark side of the organization -- follows the grand tradition of whistleblower films. Though it does have one cartoon villain, overall it seeks to give balance to both sides of the abortion debate.
(Rated R for disturbing images) 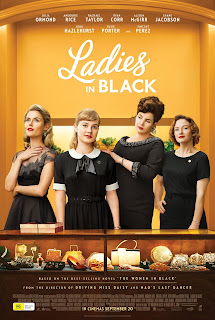 #8 - Ladies in Black Bruce Beresford directed what may be my all-time favorite film about faith, Tender Mercies, so I was glad to see him at work again. This is a nice little film about women working at a department store in Sydney in 1959. Pleasant characters to spend a couple of hours with.
(Rated PG for language and smoking)

#7 - The Best of Enemies 2019 was a great year for Sam Rockwell. He shows up on another film on this list, and he was also very good in Richard Jewell (where he played a tenacious attorney defending a hero painted by the FBI and the media as a villain). But the best Sam this year was in this film, where he portrays a KKK leader forced to work with an African American woman (Taraji Henson) to desegregate schools in 1971 Durham, North Carolina. It's a powerful true story that I might return to because it does have some very good clergy.
(Rated PG-13 for language and violence)

#6 - Avengers: End Game Up to now, I’ve been trying to include films that readers might not have heard of, pointing y’all to new things. With this one, any reader who might be interested has probably heard about this film and more than likely has watched it. However, by taking a decade of Marvel films and bringing the long saga to a satisfying conclusion, this movie achieved something significant. Recent Star Wars films prove this is a difficult task.
(Rated PG-13 for language and violence) 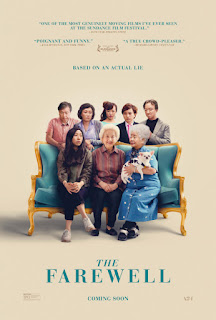 #5 - The Farewell  One of my daughters is a big fan of Awkwafina, and this film won me over as well. It's the story of a Chinese family trying to keep their grandmother from knowing she has a terminal cancer diagnosis. The story is often funny, but it's also thoughtful about cultural differences and issues of integrity.
(Rated PG for language and smoking)

#4 - Jojo Rabbit Sam Rockwell makes an appearance again, but not as a Klansman. This time, he's a Nazi (apparently he's not concerned about typecasting). Writer/director Taika Waititi boldly makes a comic film about the final days of Nazi Germany, focusing on a child who has made Adolf Hitler (Waititi) his imaginary friend. Very funny and at times completely heart-wrenching.
(Rated PG-13 for disturbing images, violence and language)

#3 - Yesterday Director Danny Boyle (Millions) and screenwriter Richard Curtis (Four Weddings and a Funeral) tell a strange fable about a man who finds himself in a world where the Beatles have been forgotten. Jack (Himesh Patel) sees a path to fame and fortune by presenting himself as the creator of "I Want to Hold Your Hand" and "Let It Be." The film has interesting things to say about creativity for artists who always owe a debt to their predecessors.
(Rated PG-13 for suggestive material and language)

#2 - Once Upon a Time... in Hollywood There are many people who can’t stand Quentin Tarantino, and I can understand that. His films are violent and vulgar, and QT is a pop-culture vulture. But I found this film very funny and oddly touching. Set in the ’60s, it follows TV star Rick Dalton (Leo DeCaprio) and his buddy/stuntman Cliff Booth (Brad Pitt), who stumble into an encounter with the Manson family. Booth’s contest with martial arts icon Bruce Lee (Mike Moh) was my favorite scene in a movie all year.
(Rated R for violence, sexual material and language)

#1 - Parasite My favorite filmmakers, the Coen Brothers, didn’t make a film this year, but South Korean writer/director Bong Joon Ho made a film very much in the tradition of Fargo. A very poor family finds a way to work themselves in the home and life of a well-to-do family. At turns funny and very dark, this is a film you should not read about in advance. Just watch it. It was so nice to be surprised in the theater.
(Rated for language and violence) 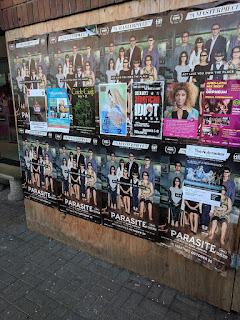 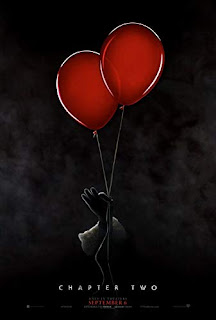 #5 - Triple Frontier  Like many Netflix creations, it was confusing figuring out whether this was primarily a movie or a TV show. This was a problem of expectations. I love guy heist films, but this had so many gaps in logic it drove me crazy.
(Rated R for language and violence)

#4 - It Chapter Two This is another film that had great problems with expectations. The first film, It, I liked very much, especially its delightful cast of children. The adults taking over the same roles in this sequel don’t do as well, and the plot is just a mess.
(Rated R for language and violence)

#3 - The Fanatic John Travolta gives an offensive performance as a mentally challenged person who adores and then abducts a movie star. I never thought that anything would make me wish that Fred Durst of Limp Bizkit would go back to music, but his writing and directing of this film nearly does that very thing.
(Rated R for violence and language) 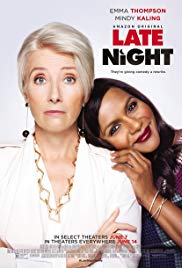 #2 - Overcomer - I mentioned earlier that most Christian films are bad, and this is a prime example. It takes the trope of Christians having success in every field of life to the limit, with a freshman high school girl with asthma going to the state championship in track and field (by cheating). You know, moviemakers, some Christians fail at stuff.
(Rated PG for something or other)

#1 - Late Night I like Emma Thompson a lot, but this was not her year. If I'd been guessing what film she was in would make this list, I'd have guessed Last Christmas, but this film was worse. It tells the story of a long-time female late-show host who finds a way to become relevant again by making her comedy more political. If there is anything we don’t need in this world, it's more political division and sarcasm. Just a slog.
(Rated PG-13 for language)

Best Church in a 2019 Film
The New Temple Missionary Baptist Church of Los Angeles in the film, Amazing Grace. This documentary about Aretha Franklin making an album in a church was filmed in 1972, but was not released until this year. I want this kind of music program in my church.

Email ThisBlogThis!Share to TwitterShare to FacebookShare to Pinterest
Labels: Best of, Sam Rockwell