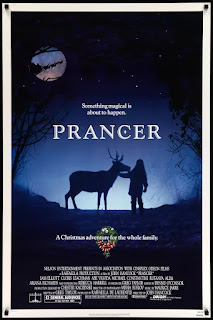 Prancer (1989)
I love Tom Stoppard’s play, Rosencrantz and Guildenstern are Dead, in which two very minor characters from Shakespeare’s Hamlet are put in center stage. There have been Santa books, films, and plays without number which make minor mention of his reindeer. And there is, of course, Rudolph the Red-Nosed Reindeer. But the other eight that pull the sleigh are usually lumped together as a group. This film takes one of the eight, usually interchangeable, reindeer and makes him the hero in 1989’s Prancer.

Okay, Prancer isn’t really the hero of the film. The protagonist is a little girl named Jessica Riggs (Rebecca Harrell Tickell) who lives in the small town of Three Oaks, Michigan. She lives with her widowed father and older brother, and the family is struggling to keep financially afloat. Her father, John (Sam Elliot with his famed mustache), is considering sending Jessica off to live with her Aunt Sarah (Rutanya Alda).

Jessica attends a small school -- one assumes it's a public school. Her class is practicing “Oh Little Town of Bethlehem” for the upcoming Christmas pageant. Jessica sings louder and with much more enthusiasm than the other children, and sadly, she's not always in key. Her teacher encourages her to sing more softly. (Jessica’s father mentions that Jessica, "plays Christmas records all year.”)


For reasons that are not really clear, Jessica’s father doesn’t attend the pageant, which focuses on the birth of Jesus, with a traditional nativity scene. It seems that this school is still flying under the radar of the American Civil Liberties Union. We don’t see any attempt to balance the Christmas celebration with a Hannukah celebration (we don’t hear them singing the Dreidel song). But one of the teachers does talk about the magic of the full moon and claims that a full moon on Christmas brings a magical time of peace. So I guess there is an attempt to balance Christianity with New Age nonsense.

Immediately after the pageant, Jessica and her friend are walking home through the snowy town as it's being decorated for Christmas with Santa and reindeer hanging above Main Street. When one of the reindeer (Jessica somehow recognizes it as Prancer) falls onto the street and is smashed. Before long, as the full moon waxes, an injured reindeer appears in Jessica’s barn. Clearly, a kind of sympathetic magic is at work.

Jessica takes care of the reindeer but decides against telling her father. She gets the town vet (Abe Vigoda) to care for the reindeer. She begins working for a grouchy hermit, Mrs. MacFarland (Cloris Leachman), to pay for reindeer food. And she asks the local department store Santa (Michael Constantine, yet another TV Land favorite) to send a message to the real Santa Claus that she has Prancer (not since Miracle on 34th Street has anyone really been able to tell the difference between reindeer that aren’t Rudolph.)

But this department store Santa, Mr. Stewart, doesn’t send the letter to Santa. Instead, he takes it to the local newspaper, which -- in an incredible act of journalistic malpractice -- publishes a story about Jessica, using her full name, without interviewing Jessica or talking to her father. It is published as an opinion piece, a spin on the famous “Yes Virginia, There is a Santa Claus” editorial, saying there is hope because there are girls like Jessica that still believe in Santa Claus. That newspaper is opening itself up for a huge lawsuit.

I’ll give the pastor of Jessica’s church the benefit of the doubt that he assumed Jessica and her father were fully aware of the newspaper article and had given consent for the story to be written. Otherwise, his decision to read the newspaper story during a worship service, without Jessica’s consent, is almost as irresponsible.

I’m guessing from the briefly seen sign in front of the church building that it’s Methodist (the flame and cross). It seems to be a decent church. We hear the pastor deliver a quite orthodox prayer. As befits the season, the congregation sings “Hark the Herald Angels Sing” but also “How Great Thou Art.” I found it amazing that the congregation was able to sing both songs while holding lit candles with the little cardboard drip protectors. Usually, because it takes time to get all the candles lit, one song is the maximum that can be sung with those little candles. Usually that song is “Silent Night.” And I'm baffled that they use candles for a morning service. Jessica is sent to church with her aunt. (Her dad stays home to read the Sunday newspaper, but not thoroughly enough to get to the editorial about Jessica.)

The pastor concludes this pre-Christmas service by reading the newspaper story about Jessica and her belief in Santa Claus. “Town of Three Oaks is in good hands as long as we have children like Jessica Riggs with their hope and wonder,” he concludes. I’d think you’d want to conclude such a service focussed on Jesus rather than Santa, but that’s me.

But there is something that is very good about this church. Mrs. MacFarland comes to church, apparently inspired by her interaction with Jessica, and many people of the church welcome her with great warmth. This weighs heavily in the Movie Church Steeple Ratings.

So I’m going to leave some of your plot questions unanswered here. “Is that reindeer in Jessica’s barn the real Prancer?” “Does the reindeer rejoin Santa and his sleigh team?” “Is Jessica able to remain with her father?” These questions, I’m sure, will perplex anyone who has ever seen a Christmas film (that is not Bad Santa.)

But to finish up our Movie Churches business, we're giving the church and pastor in Prancer a three out of four steeple rating.

Posted by churchandstates at 9:02 PM