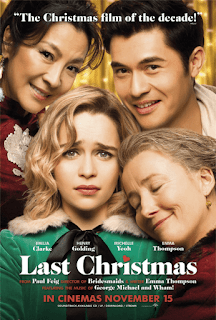 Though I really hate the songs “Christmas Shoes” and “Grandma Got Run Over By a Reindeer,” my all-time least favorite Christmas song would have to be “Last Christmas.” Maybe I hate it most because it gets more airplay than the other two, but it really is a stupid song. Look at the lyrics:

“Last Christmas, I gave you my heart

But the very next day you gave it away

This year, to save me from tears

I’ll give it to someone special.”

These lyrics show an incredible lack of self-awareness. Surely last year this person thought he or she was giving his or her heart to someone special, so why does this person think his or her judgment has improved over 12 months? The song was originally a hit for the 1980’s band Wham! but it's been covered by many people since. Like many popular Christmas songs, it's been made into a movie or TV special (see White Christmas, Rudolph the Red-Nosed Reindeer, Deck the Halls, Grandma Got Run Over By a Reindeer… Wait, DON’T SEE Grandma Got Run Over By a Reindeer. Or The Christmas Shoes)

So anyway, "Last Christmas" (the song) was made into a motion picture that was released in November, and it's still in a few movie theaters. I wasn’t expecting it to be a good film, because it is based on a really stupid song, but I went because from the previews, I thought it featured a church and that’s what we write about here, how churches and clergy are portrayed in films.

After seeing the film, I’m not sure whether it has a church in it or not.

Written by Emma Thompson and directed by Paul Feig, Last Christmas is about a young woman, Kate (Emilia Clarke), living in London making one poor life decision after another. She works in a Christmas shop dressed as an elf. After work, she goes out, gets drunk in pubs, and engages in a series of one night stands. Her most recent roommate kicked her out. We learn that she began to make these bad choices after a health crisis a year before. One night, she meets a man named Tom (Henry Golding) and begins to believe that her life may be changed by him.

So how do churches (maybe) play into this? We have a flashback to 1999 when Kate and her family were living in Yugoslavia. She is in a children’s choir, yellow robes and all, in a beautiful old church, maybe Orthodox, maybe Roman Catholic. And the song they are singing is “Heal the Pain” by George Michael (Michael was half of the band Wham!) Some lyrics from that song: “Be good to yourself, ‘cause nobody else has the power to make you happy.”

I’m okay with secular songs being used in church services at times. I once visited a church that used Cage the Elephant’s “Shake Me Down” to powerfully illustrate the day of Christ’s crucifixion. I have a friend who used only the music of David Bowie the weekend after the musician’s death, but it was used thoughtfully. But why would a church feature “Heal the Pain”? That makes no sense to me.

But since we learn nothing about this church, we don’t know why it is used. Perhaps it is a church in Yugoslavia that worships Geoge Michael, which might make sense in the world of this film.

There might be another church in the film, but I’m not sure if it was a church. Tom takes Kate to a homeless shelter called St. Benedict's. It certainly looks like a church, and it’s named like a church, but perhaps it’s a homeless shelter that has taken over church property. We never see any clergy in the film, only two men that may work for the shelter, maybe volunteers. That’s never very clear either.

I also wasn’t quite clear what the homeless shelter does. We mainly see people, men and women, standing in line outside of the shelter/maybe church in what seems to be the evening. Are they waiting for meals or shelter for the night? This isn’t quite clear.

One time when Kate visits the shelter, the two men are serving tea with biscuits (cookies on this side of the pond) and then soup. The serving process doesn't seem at all organized; there's nothing professional about the process at all. Though the place is called a shelter for the homeless, there is no indication people actually stay at the shelter (except for a passing mention of night staff -- possibly volunteer).

I happen to work as a chaplain at a men’s homeless shelter, and I've volunteered at a few more. Nothing about the way the place in Last Christmas is run struck me as approaching reality. (And -- perhaps a cheap shot -- but though there is some attempt to make the guests at the shelter seem scruffy, all of them still appeared remarkably clean.)

The thing that makes it most unlikely that St. Benedict’s serves as a church is Kate’s talent show. Kate comes up with the swell idea of putting on a show to raise money for the shelter (just like in the movies!) She has the guests of the shelter audition for the show, and my, some of them are so amazingly talented! So far, not too different from films like The Bells of St Mary's (or even Sister Act.)

But what night does she choose to put on the show at the shelter? Why, December 24th, Christmas Eve at 7:30 pm.

If the property still was a church, perhaps on that night, at that time, the facilities would already be in use for some kind of worship service. (It should also be noted that all of Kate’s family and friends and acquaintances had no other plans for Christmas Eve. It’s a full house for the talent show.)

And what song is featured in this Christmas program? Nothing by Wesley such as “Hark the Herald Angels Sing,” or by Luther like “Away in a Manger,” or even by Handel such as “The Hallelujah Chorus.” Nope, the featured song this Christmas Eve is courtesy of St. George Michael, the title tune itself.

Kate makes a little speech about how Christmas is about helping each other out, which is a swell thing to do, but Linus van Pelt made it clear decades ago that Christmas is about something else. Again, this makes me doubt that St Benedict's is a church. If it is, it’s not a very good one.

One last little item, with major SPOILERS in the next paragraph.

This has nothing to do with the church, but it was a rather bizarre plot point in the film. You may recall the line in the title song, “Last Christmas, I gave you my heart.” In this film, the lyric was -- quite literally -- true. Kate’s health issue was a heart condition, and she received a heart transplant one year before the events of the film. (I shamefully admit that this somber reveal made me laugh audibly in the theater. I am not a good person.)

So rating this Movie Church is a challenge, because we’re not sure St. Benedict’s is a church. But if it is, both it and the church in Yugoslavia earn a meager Two Steeples for preaching -- at Christmas! -- the Gospel of George Michael rather than Jesus.
Posted by churchandstates at 9:13 PM