Christmas Movie Churches: The Holly and the Ivy

Once again, it's that time of year when almost every website posts a list of top Christmas movies. It is easy to tell if such a list is legitimate or not. If it doesn’t have It’s a Wonderful Life as the top movie, it’s a fraud. Often these best-of lists try to add a bit of quirk by saying National Lampoon’s Christmas Vacation is the best Christmas film ever, but sorry, Chevy. It just ain’t so.

Usually, I’ve seen all the films on these lists, but one shows up on occasion that I couldn’t track down until recently: 1952’s The Holly and the Ivy. This film's DVD isn't for sale everywhere like your Elf or Home Alone. It doesn’t screen for 24 hours straight on TBS like A Christmas Story. It certainly doesn’t show up for holiday screenings in your local theater like Gremlins and Die Hard. This one is much harder to track down.

And I really wanted to track down The Holly and the Ivy because it, along with The Bishop’s Wife (and the Denzel remake), is one of the few classic Christmas films that features a clergyman. Until fairly recently, the DVD was difficult to obtain, and the only channel that seemed to play the movie was TCM once a year (and I’m not currently a subscriber). I finally found it on a wonderful online service called Kanopy that allows you to use your local library card to access films.

Directed by George More O’Ferrall based on a screenplay by Anatole de Grunwald, the film tells the story of an elderly, widowed Anglican pastor who invites his family home to the vicarage for Christmas. The Rev. Martin Gregory (Ralph Richardson) sends invitations to his sister and sister-in-law, his son, Michael (Denholm Elliott long before he was Indy’s boss in Raiders of the Lost Ark), and one of his daughters, Margaret (Margaret Leighton). There is no need to invite his daughter, Jenny (Celia Johnson), because she lives with her father in the small English village of Wyndenham.

Jenny has long been caring for his father who, for some reason, is considered competent to pastor a congregation but not to care for his own needs in his own home. We soon learn that Jenny is in love with an engineer, David (John Gregson), who is about to leave on a six-year-long assignment in South America. David would like to marry Jenny, but she feels obligated to stay with her father. It is apparent to everyone, especially Jenny’s aunts, that she is in love and would like to marry David. But Jenny’s father seems oblivious to Jenny’s desire to be with David. He expresses envy of David’s travels, saying as a young man, he desired to be a missionary in South America. It takes a special kind of self-absorption on the pastor’s part to ignore his daughter’s needs and desires.
He seems just as ignorant of the private lives of his other two children. 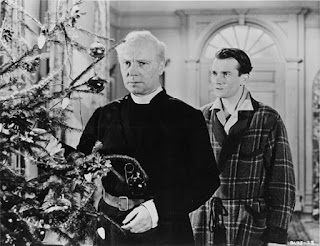 Michael is in the army, and we first see him bending the curfew rules to be with a girl. He needs to use a great deal of blarney to be allowed to come home for Christmas. He is quite bored in his family home on Christmas Eve, as most any young man would be with his rather dull family. He and his sister, Margaret, tell everyone they are going off to the movies. But Michael and Margaret go off to the local tavern and get schnockered. When they return home drunk, the Reverend rails against Michael for corrupting his sister. Michael tries to tell his father that his sister is not a novice drinker, that in fact, the tavern was her idea. This infuriates the Reverend all the more. Michael tells his father that his children never talk to him because he won’t listen to the truth. The father dismisses this statement as impudence.

Margaret is really the daughter who is hiding the most from her father. She works in London as a fashion reporter. There is a sweet moment when Rev. Gregory talks about his delight in reading his daughter’s articles, though he wouldn't have thought fashion would otherwise interest him.

But there have been huge events in Margaret’s life that she has hidden from her father. She had fallen in love with an American aviator, but that man died in a flying accident. Margaret was pregnant with the man’s child and kept the baby. She raised the child to the age of four when he died from meningitis. This led her drinking heavily, to the point of alcoholism. But she has kept all these things secret from her father.

Michael takes it upon himself to tell his father Margaret’s story. The vicar finally must confront the fact that his children are unwilling to bring their problems to him because they think his “religion” will keep him from understanding and sympathizing with their situations.

He admits his failings, “A fine caricature I've made of religion if that's how it seems to my own children. Should be because of religion, I have more sympathy and understanding for people. But I have, Margaret, I have. Do I seem the type of man that'd turn away from the sorrows of his own children?”

He has a heart-to-heart talk with Margaret as she prepares to leave the house to return to London. He tells her that she should have talked to him because he understands the problems in the world -- that is the reason he became a pastor. They do resolve their differences, and she decides to stay.

So the Reverend Gregory hasn’t done a great job as a father. Was he a poor father because he had poured himself into his work as a pastor? The film implies that a bit, but frankly, he doesn’t seem to have been any great shakes as a pastor.

At one point in the film, he says, “There's the church. A great little country church standing up there in the middle of the town. It's the center of the place architecturally. It should be the center of the place spiritually too. But it's not. No. That little tin-pot shack of a cinema they're going to tonight has more influence on the lives of people here than the church.”

It seems he hoped that people would come to church and hear his sermons, rather than his making an effort to go out to be among the people. From what we hear of his sermons, they don’t seem to be life-affirming or life-changing. On Christmas Eve, he is still speculating about what he’ll talk about the next day. He’s considering talking about the pagan traditions that led to Christmas traditions, such as “the holly and the ivy” as a symbol of the conflict between male and female. He admits to hating Christmas morning sermons because he knows everyone would rather be at home. In the end, his whole family does go to church that morning, but perhaps they are the exception that proves the rule. They would rather be at church than the vicarage.

The Reverend Gregory seems to be a nice enough fellow, but not a great father or pastor, rating Two out of the possible Four Steeples in our Movie Church ratings.