October: Between the Devil and the Deep Blue Screen 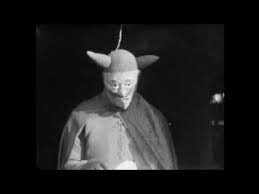 October is coming, which is always a frightening time here at Movie Churches. There's no shortage of horror films that use clergy as characters and churches as settings. Often the villains in these films are minions of the devil: werewolves, vampires, and most certainly demons. This coming month, we won’t settle for the little guys. Instead, we're going to look at films that feature their boss, Satan himself.

There are plenty of films that feature demons and possession, the most famous being The Exorcist along with one of its sequels, The Exorcist III. We've also talked about The Exorcism of Emily Rose, The Rite, and The Nun. We’ve seen clergy confront the forces of darkness in Prince of Darkness, Pastorela, The Unholy, The Omen, The End of Days, The Calling, and The Way of the Wicked. 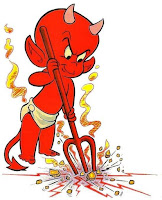 But this month, the films we’ll look at have the Top Hell Dog, the Infernal Kahuna, the Blazing Boss, yes, Big Bad Beelzebub. Just don’t expect to see the guy wearing red tights and carrying a pitchfork that they featured in Hellbound Train (though that would be awesome). In these films, the Archfiend is a little more subtle. But just a little.
Posted by churchandstates at 8:34 PM