Is This How We Play the Game? More School Sports 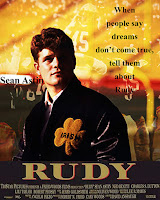 Rudy (1993)
If you were to listen to some of Twitter's great minds of the atheist variety, you'd think the Church has brought nothing of value to the world; only war, prejudice, and intolerance. I assume people who tweet such things have no respect for higher education because most of the major universities in the United States were founded as religious institutions. I’m writing, of course, about schools such as Princeton (Presbyterians), Yale (Puritans), and Harvard (yet other Puritans). (Harvard did just hire an atheist chaplain -- a choice the founders of the institution might find, um, questionable.)

And then there is Notre Dame, still very much a Roman Catholic institution and also one of the most respected universities in the country. It’s a school respected for its academics but loved for its football team. Going back to the days of Knute Rockne (widely regarded as one of the greatest coaches in football history which led to retellings of his story on the silver screen with Pat O’Brien and Ronald Reagan). The football team still has a tremendous following, and NBC has a contract to show all their games on their streaming service.

This love of Notre Dame football is the basis of Rudy -- and the foundation of the true story behind the film. It's the story of Daniel “Rudy” Ruettiger, who wanted to play Notre Dame football more than anything else in the world. This seemed rather unlikely as he was a small guy and a terrible student. 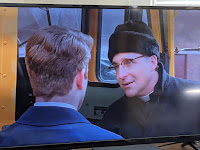 In the film we see Rudy (Sean Astin) in his high school years at a Catholic school in Joliet, Illinois, giving his all on the football field but not so much in the classroom. The priest who taught civics told Rudy the opposite lesson to that taught in almost all sports films. He told Rudy that dreamers don’t accomplish things in this life, but instead, “The secret to happiness is to be thankful for the things the good Lord has bestowed upon us. Not everyone was meant to go to college. You don’t have the grades to go to community college, much less Notre Dame.”

This priest takes a group of students to visit Notre Dame, but refuses to let Rudy on the bus. Since Rudy has no chance of attending the school, he believes Rudy is just coming to sightsee and gawk.

This might not be how priests are supposed to act in sports films, but I’m not going to be too hard on the guy. Our society, particularly the media, often looks down on those who pursue blue-collar jobs though these are honorable and vital jobs. The steel workers in Rudy’s family do important work. The advice the priest gives Rudy is not bad advice. But Rudy has something that keeps him following his dream even after this decent little speech from his high school priest.

Rudy doesn’t go to college out of high school. Instead, he works in a steel mill, but when his friend is killed in an accident at the steel mill, Rudy decides he has to give his dream a real shot. At the funeral, the priest implores God to spare Rudy's friend Peter from everlasting punishment. Rudy decides to think of this world and not just the world beyond, so he takes a bus to North Bend, Indiana. Notre Dame is one of the only football programs in the country that encourages walk-ons for the team.

Rudy arrives at the Notre Dame security post early in the morning, well before anything is open. Rudy says to the security guard, “There must be someone I can talk to.” The guard says, “You can always talk to a priest.” (That kind of line almost guarantees a bonus Steeple in our Movie Churches ratings.)

The priest can’t get Rudy into the university, but he tells Rudy, “I can get you one semester, at a junior college, Holy Cross. If you get the grades there, you can go one more semester. Then you might get a chance to go to Notre Dame.” It’s a small chance, but good for the priest for offering it. Rudy takes full advantage of it.

At Holy Cross, Rudy takes a religious studies class where he talks about the inspiration of Scripture with a very low view of the doctrine of inerrancy. A classmate, D-Bob (Jon Favreau), offers to help Rudy with his studies. He tells Rudy that with the priest teaching that class, “all you need to remember is ‘sitz im leben’ and you’ll be good.”

Rudy does well at Holy Cross but still worries about getting into Notre Dame. He goes to one of the university’s chapels to pray, and Father Cavenaugh finds him there and asks if Rudy is “taking [his] appeal to a higher court.”
Rudy asks the priest if he can help him get in. The priest responds, “Son, in thirty-five years of religious study, I’ve come up with only two hard, incontrovertible facts; there is a God, and I’m not Him.”

Rudy gets in at Notre Dame -- and gets on the football team. (Otherwise there would obviously not be a movie). We see a couple more priests in the film, one on the sidelines and another praying with the team before a game.

The priests all come off pretty well, as does the school -- which isn't surprising when one considers that this was the first film that Notre Dame permitted to be filmed on campus since Knute Rockne, All American in 1940. Therefore, the priests in this film, for their good work of pursuing higher education and meaningful life, earn our highest rating of Four Steeples.

Posted by churchandstates at 4:00 PM