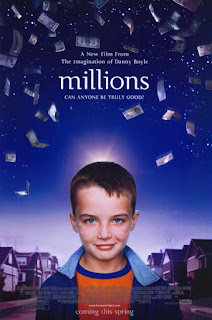 Millions (2004)
All due respect to A Charlie Brown Christmas, but I'm over lectures in Christmas entertainment about materialism. Especially when the message is interrupted by commercials with new car keys given as “stocking stuffers” and the Little Drummer Boy bringing Coke to the manger. An exception to this rule is Danny Boyle’s thoughtful and charming 2004 feature, Millions.

It tells the story of an English boy, Damian, who recovers a satchel of cash that falls (as far as he can tell) from the sky. He shares his find with his brother, Anthony, who warns him they can’t let anyone know about the find, or the government will “take away 40%. That’s nearly all of it.” Anthony is torn between buying cool things and investing wisely, whereas Damian would like to give the money to the poor.

An added complication is that the money is in pounds, and the nation is about to convert to the Euro. (When the film was made, it seemed likely that Britain would change from their current monetary system of pounds, crowns, pennies, guineas, nobles, shillings, parsnips, topsy poos, wattle nellies, and daring shanks to the European Union's system of Euros. Brexit has, of course, changed all that.) Anthony and Damian need to do something with the money before the conversion or it will be worthless. Another complication that the boys don't realize at first is that the money is stolen -- and the thief is looking for it.

The film is set at Christmas time. Though there are no churches in the film, the boys' school may have some church connection. It's called All Saints, they encourage charitable giving, and they perform a Nativity Play complete with a donkey on wheels to take Mary to Bethlehem. There is clergy in the film -- top clergy -- saints, in fact. Saints appear to Damian (though no one else can see them).

St. Clare of Assisi is the first saint Damian sees, and she tells Damian she's the patron saint of visions, and therefore, television. She smokes cigarettes, and when Damien asks if that is allowed in heaven, she assures him you can do whatever you want in heaven. Damian asks if Clare has seen a Saint Maureen, and she tells him no. Maureen is Damian and Anthony’s mother who recently passed away.

St. Francis of Assisi encourages Damian in his desire to give money to the poor, much to Anthony’s annoyance. Damian takes a group of street beggars to Pizza Hut where they order extravagantly, and he puts a thousand pounds into a robotic bin at their school that's raising money to dig wells for clean water in Africa. When his donation is identified, both boys are sent to the principal’s office. Anthony says they stole the money so they can keep the real secret (and the rest of the money) from being discovered.

Damian is also visited by a group of saints, the martyrs of Uganda. 23 Anglican and 22 Catholic converts to Christianity were executed for their faith in the Kingdom of Buganda (now Uganda). Damian notices they are praying desperately for something and learns they are praying for water. The martyr encourages him to use his money to build wells. 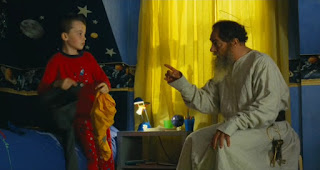 The Apostle Peter also visits Damian, noting he's the patron saint of security. He encourages Damian to keep the key to his old house safe, and he encourages Damian to lead by example, citing the story of the boy who gave his bread and fish prior to the feeding of the 5,000. Peter claims the only miracle that happened that day is that people were encouraged by the boy’s example to share themselves. All four of the Gospel writers shared this story, and if that’s what happened, I think one of them would have said so instead of telling the story as they did. It's a case of bad theology from a screenwriter being put in the mouth of a saint.

Which is really too bad, because there is so much good theology in the film. The whole story works like one of the parables Jesus told. Jesus told the parable of the shrewd manager  (Luke 16) who used his master’s wealth for the short time it was in his possession to ensure himself a prosperous future. The expiring money in the film reminds us that worldly wealth is fleeting and is most wisely for the benefit of the Kingdom of God.

At Christmas time (and all year through), it is good to think of gifts we can give that will be of eternal worth -- like giving water to the thirsty and food to the hungry. Jesus said gifts like that have eternal value.

I love the film as a whole, but because Saint Peter’s theology in the movie doesn’t match his theology in Scripture, we can’t give the saints of this film our highest rating, but they still earn a solid 3 Steeples.
Posted by churchandstates at 7:38 AM