A Christmas TV Movie Before the Hallmark Channel 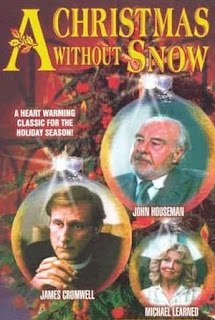 My high school drama teacher would not do productions of Shakespeare. He said he had too much respect for the Bard’s work, and it was just a fact that high school students didn’t have the experience or skills to pull off poetry and emotions in the comedies or the tragedies. I thought of him while watching the 1980 TV movie A Christmas Without Snow. In the film, a small, amateur choir takes on George Frideric Handel’s Messiah -- a masterly work. A small, unskilled choir is not going to do it justice. That’s just one of my problems with how church and clergy are portrayed in the film.

Here at Movie Churches, we prefer to look at films that had theatrical releases. We like to keep a distinction between movies and television (so much so that next year we’re starting a new blog, TV Churches), but frankly, there's not an abundance of theatrically released films that feature both Christmas and churches and clergy. You'd think there would be, but we’ve already hit most of them. Besides, this film (described in IMDb as "a timeless, rare classic for the holiday season") touches on some interesting issues.

The film was written and directed by John Korty (who made other popular made for TV movies of the time such as A Farewell to Manzanar, The Autobiography of Miss Jane Pittman, and most notably, The Ewok Adventure) and stars Michael Learned (Ma from The Waltons) and John Houseman (who played John Houseman in Scrooged).

It tells the story of a newly divorced woman, Zoe Jensen (Learned), who leaves her son in Omaha, Nebraska to start a new life in San Francisco. Strangely, she moves early in the fall and hopes to find a teaching job. Yes, I know this is prior to Monster.com and LinkedIn, but it still seems she could have made some phone calls before the move to learn that teaching jobs are not in abundance (because most school hiring decisions are made early in the summer and because downtown San Francisco isn't rife with schools). She must settle for office temping jobs.

Zoe is lonely, but a neighbor in her apartment building invites her to join a church choir. (That’s what interested me about this film -- we often see or hear church choirs in films, but there aren’t many movies about church choirs.) Zoe quickly makes friends with other women in the choir, drinking coffee before practice begins. She talks with them about how hard it is to find men in the city, “You know San Francisco…” If this is a reference to the city’s gay community, it is the only one to be found.)

Choir practice begins and the new director, Ephraim Adams (Houseman), a crusty senior citizen who took the job so he wouldn’t have to retire. He explains his expectation for the choir: “Music is a craft, not a social activity or religious duty.” 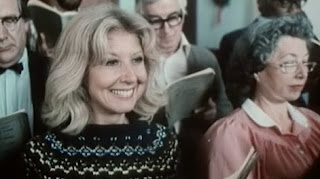 I would think being in a church would lead to some connection with religion, but the pastor, Reverend Lohman (James Cromwell), nods in agreement. This surprised me because if music is performed in a worship service, I would think it would be, you know, part of the worship. Anyone who reads the Psalms knows there can be a relationship between music and religious duty… In fact, that relationship is essential. But the Reverend doesn’t think so. (If it’s just about the music, why not have the choir perform French or German art songs instead of, you know, religious music.)

The director continues, “Just as the Reverend is called to his vocation, I am called to mine. I expect miracles. I will make something of the cacophony I heard last Sunday.”

The miracle he expects is for the choir to perform Handel’s Messiah, “Because it is difficult. Those seeking a more relaxing activity, leave now and locate the nearest hot tub.” Hey, that would be more than difficult. To take a nineteen member strong amateur choir that meets one evening a week and is -- according to the director -- just, well, bad -- and expect them to pull off a decent performance of Messiah, would be impossible. Indeed a miracle. But I take it, a secular miracle since the director wants to stay clear of religious duties.

In that first rehearsal, accompanied by their new organist, Seth Rueben, the choir does indeed sound awful. I would think it would be wise for a choir director to get to know his resources, the strengths and weaknesses of his members, before deciding what music they should use, but Ephraim decides the music first and try to impose it on the members. He does admit the choir will have to grow, recruiting other members. This is another challenge, to take in new members along with learning new work.

As the months go on, Zoe develops friendships with women in the choir and awkwardly dates a couple of the men. This is one of the best things about the movie’s depiction of the choir: a community of friends does develop. They even gather together for Thanksgiving. But it does seem that faith is a very small aspect of these friendships. One of the members talks of going to “the church of Beautiful Women.” Outside of choir practice, they do join together in singing “Leaning on the Everlasting Arms.”

Ephraim auditions for solo roles in Messiah. One of the members asks for private auditions, which the director refuses, explaining, “Pressure in this room will be as great as in church with four hundred people present.” I wondered if they were going to do one just performance of Messiah for the congregation, rather than a performance for the general public.

Two major obstacles endanger the performance of Handel’s work (aside from the ineptitude of the singers). First, the organ is vandalized. One of the choir members accuses another choir member, a young man who's one of the few African Americans in the group. The actual culprit is the teenage son of the pastor.

The pastor and his wife seem to have an odd relationship with their son. They expect him to put the church first in his life, as they do. (They, in fact, say to him, “This church is the most important thing in our lives.” I can see where he might take that wrong.)

The church can’t afford the $5000 to repair the organ. They consider purchasing an electric organ which sounds like a kid’s Casio and for some reason picks up police radio calls, so the choir pitches in and repairs the organ themselves. I thought such work would take great levels of expertise, but what do I know?

The other obstacle is that Ephraim gets very sick and is hospitalized just before the performance. They try to figure if anyone can take his place directing, but Seth argues no one else would have the director’s take on the work (because The Messiah is such an obscure work in the classical world).

But Zoe encourages everyone to go on with the show, and they do and it comes off swell.

So how would I rate this church, whose name and even denomination is kept secret throughout the film?  The choir of the church does develop a sense of community, which is a good thing, but they are all about performance and not worship -- which is not a good thing in my book. As for the pastor, we hear one sermon of his, in which he rails against the commercialization of Christmas. His wife thinks it’s his best sermon, but I think the Charlie Brown Christmas special did it much better. Since it's Christmas, though, I’m giving this church a Scroogish Two Steeples.


(And about that title, A Christmas Without Snow; it’s always a Christmas without snow in San Francisco. It’s like calling a film set in Omaha, A Summer Without Beaches.)
Posted by churchandstates at 7:54 AM