A Not Very Peaceful Christmas Film 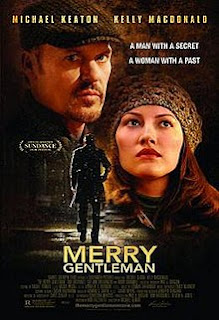 It’s that time of year again. The time when people get into Twitter fights about whether or not Die Hard is a Christmas movie. (Not that we’ll settle that debate here. My family watches the film every year, usually on Christmas Eve Eve, and I must attest it is a film without a church or clergy.)

Die Hard is an action film with dark themes, like other movies set at Christmas time, such as Reindeer Games and Batman Returns. Writer/director Shane Black has spent much of his career making dark action films set during Christmas time: Lethal Weapon; Kiss, Kiss, Bang, Bang; and The Nice Guys. He’s said Christmas imagery -- with its hope for goodwill and peace on earth -- makes a nice contrast to people shooting at each other. Most of these films feature decorated trees and colored lights, but not sermons on Luke 2 or Christmas Eve Mass.

One film about a contract killer, though, finds a place for both Yuletide and a church sanctuary. That movie is 2008’s The Merry Gentlemen, written by, directed by, and starring Michael Keaton. Keaton plays Frank Logan, a hitman. Early in the film, we see him approach a man in a car, pull out a gun, and shoot the man in the head. The soundtrack immediately switches to “Jingle Jangle Christmas.” Logan calmly walks down the street, stopping in a Christmas tree lot. He comes across an outdoor manger scene, and he stands up a Wiseman figure that has fallen down.

We are also introduced to Kate Frazier (Kelly Macdonald). After being beaten by her husband, Michael (Bobby Cannavale), she left her home to begin life in a new city. She works as a secretary at Mass and Associates. Kate goes to visit a Catholic Church near her work. It is a beautiful cathedral with majestic stained glass and poinsettias by the altar. She lights a candle. She talks about it with a fellow worker, Diane (Darlene Hunt).

Kate: Have you ever been to the church down the street?

Kate: It’s really beautiful, and it has a statue of Jesus with hands outstretched. Religious or no, you want to run into His outstretched arms.
Diane: Well, who’s cuter than Jesus?

While leaving work one evening, it begins to snow. She looks up and sees a man standing on the top of the tall building across the street. Afraid he is considering jumping, she screams. The man backs down and disappears. Kate is understandably upset, but Diane tells her she may have saved the man’s life, “It’s a Christmas miracle, the outstretched hand of God.”

The police come. They tell her the man she saw may well be responsible for the death of a man in her building who was shot by a sniper. The man on the building was Frank Logan.

One of the police officers who interviewed Kate asks her on an awkward date (she thought he was asking for another interview about the man on the roof). She leaves when she realizes it is a date, not an interview. On the way home, she impulsively asks her cab driver to stop at a Christmas tree lot. The cab driver tells her he won’t help her with the tree, but she buys a big tree nonetheless. She drags the tree to the front door of her apartment, but when it falls on top of her, knocking her down, a man whom she doesn’t recognize comes to her aid. (She had only seen him from a great distance when she saw him on the roof). 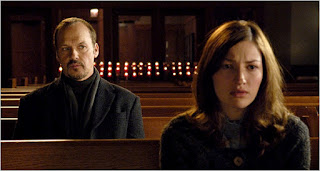 He tells her he didn’t expect to find a woman under his tree. She tells him, “You must have been a very good boy.” They begin a friendship.

One night when Logan comes to Kate’s, he passes out outside the door. She gets him to the hospital, where he is diagnosed with pneumonia.

Kate goes to see Logan in the hospital on Christmas Day. He’s surprised, and she calls herself “the Ghost of Christmas Present.”

Logan says, “I’d say you’re more of an angel than a ghost.”

Kate replies, “But they’re really the same thing, aren’t they? I guess ghosts are haunted, while angels are blessed.” (This is, Biblically speaking, a common theological mistake in Christmas films. In Scripture, angels are a different species than people, not the form good humans take after they die. It’s a Wonderful Life is one of many Christmas films that gets this wrong.)

Kate and Logan continue to see each other. On Valentines Day, Logan sends her flowers at work without a note. She also receives another bouquet without a note, and when she gets back to her apartment, she finds another admirer. Her husband, Michael, has tracked her down.

Kate draws a kitchen knife when Michael enters her apartment. He tells his story of what he did after Kate left.

“I tried to kill myself, but God wouldn’t have me. I met a man in the hospital, a priest, Father Rich, a great man. I can’t wait for you to meet him, He introduced me to Jesus Christ. I know you want to laugh. You probably should. But all my life I didn’t know my Lord and Savior. Now I know Him. He knows me. He knows what I’ve done. But He loves me still. Can you imagine such good news? I know you’re thinking it’s too good to be true. It’s where all the goodness is, baby. In the truth. There is only one thing left. For you to believe me and grant me forgive me. Praise Jesus! Can you forgive me? God sent you to me. Come home to me.”

Michael leaves Kate’s apartment but gives her a card from the motel where he’s staying. Kate calls the police and tells them she feels threatened by her husband. When the police ask whether he threatened her in words, she responds, “No, he just said he found God. I hope he has found God. I just wish he hadn’t found me.”

We never learn whether Michael’s conversion is sincere.

The police go to the motel to interview Michael. And find him dead from what appears to be a suicide -- but we’ve previously seen Logan mask his murders as suicides.)

Kate goes to the church again. She sits in a pew, greatly troubled. Logan goes to be with her. He tells Kate she doesn’t have to be afraid. “I’d never hurt you.”

Kate tells him, “I hope God will forgive me.” (She had fantasized about her husband’s death.)
“You’ve done nothing wrong,” Logan tells her.

Logan leaves her, it seems never to return.

The film opened with the sound of church bells. It seems like a good church, it, and it is at least a beautiful church. Father Rich sounds like a good priest. We are giving this rare appearance of church and clergy in an Action Christmas Film our highest Movie Church rating of Four Steeples.
Posted by churchandstates at 7:32 AM