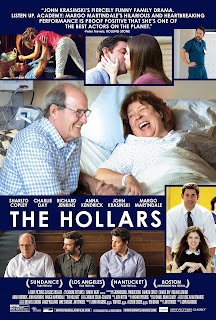 The Hollars (2016)
This film was directed by Jim from The Office. Okay, the director is actually named John Krasinski, and he's a man who's had a quite surprising career since he left the Dunder Mifflin Paper Company. I don’t think many would have thought of him as an action star (we here at Movie Churches certainly didn't), and yet he starred in a Michael Bay film (13 Hours) and followed in Harrison Ford’s footsteps as Jack Ryan. He directed two of the most financially successful horror films of the last five years, A Quiet Place and its sequel. One of the most extraordinary of Krasinski's career moves was a 2020 web series called Some Good News. At the beginning of the Covid-19 pandemic as the nation and the world were shutting down in March 2020, Krasinski offered a voice of hope. When public figures seemed to be taking every opportunity to verbally attack other public figures, the tone of Some Good News was unfailingly, well, nice.

In The Hollars, Krasinski’s second feature film as a director, he presented a member of the clergy who speaks and acts in a manner that is almost as nice as Krasinski's seems to be.

Krasinski stars in the film, playing John Hollar, a struggling graphic artist living New York CIty who returns to the small Mississippi town where he grew up when his mother (Margo Martindale) falls suddenly ill and must have brain surgery. He leaves his pregnant girlfriend, Rebecca (Anna Kendrick), in New York when he goes to stay with his father (Richard Jenkins) and his brother, Ron (Sharlto Copley). His brother Ron is the reason we meet the clergy member that gave us here at Movie Churches an excuse to rewatch the film.

Ron recently left his wife, and he takes his brother, John, along with a pair of binoculars to spy on his wife and two daughters. Ron parks his car across the street from his old house. 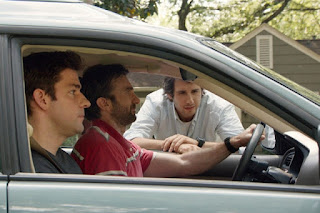 John was not expecting this and is horribly embarrassed by his brother's behavior. A man comes out the door of Ron's former home.

“He’s the new youth pastor at Mom and Dad’s church,” Ron explains as the man heads toward the car.

It's Reverend Dan, and he's played by Josh Groban. Yes, that Josh Groban. The first thing Rev. Dan asks when he gets to Ron's car? “I heard about your mother. How’s she doing?”

“Fine, no thanks to you,” Ron growls.
“What did he have to do with it?” John asks his brother.
“He’s supposed to talk to God, isn’t he? Maybe he put in an order for a brain tumor,” Ron tells him.

“That’s not how it works, Ron,” Rev. Dan tells him.
“How does it work, Reverend Dan? Tell us,” Ron retorts.

“So, you couldn’t get a job as an adult pastor?” Ron snarks.

“I do, I appreciate that very much, however…”

“Stacy was wondering if you could stop parking in front of her house and staring at her with your binoculars.”

“Yeah? Well, F you Reverend Dan!” And after a more explicit form of that statement, Ron tries to peel off with a speedy getaway. But something’s wrong with his car. It won't start, and he's stuck..

Rev. Dan says, “It sounds like you have a broken t-chain. I mean, I could take a look at it for you if you want.”

To his great chagrin, Ron must answer, “That would be helpful, thank you.”

Ron says under his breath, “This guy…”
John tells him, “Shut your mouth.”

So in a very awkward and tense situation, Rev. Dan behaves with humility and grace.

Ron continues to do stupid things throughout the film. He climbs up into his daughters’ room in the middle of the night and asks to be allowed to sleep there. The girls agree, but one of the girls calls Rev. Dan after Stacy (quite rightly) calls the police.

The police handcuff Ron and escort him out of the house. Dan asks the police to take the handcuffs off Ron (which they do). “What were you doing in the house, Ron?” Rev. Dan asks.

“Would you like to talk about it?” Rev. Dan asks.

Ron asks, “You aren’t going to push any of that Jesus [excrement] on me, are you?”

“I don’t force my beliefs on anyone, Ron,” Rev. Dan tells him.

“Really?” Ron asks, then pauses a moment. “What are your beliefs?”

Reverend Dan is not a perfect guy. I’m not sure it's wise for him to date Stacy, the mom of two elementary-school-aged children, before she and Ron are divorced. I’ve heard from separated and divorced friends about the difficulties of introducing their kids to people they’re dating. The kids are in a delicate place, and it probably isn’t wise to let kids get attached to a parent figure that might not be around long.

But otherwise, Reverend Dan responds to attacks with kindness, turns the other cheek, and offers help and hope even when he is personally attacked. In short, he behaves in a Christlike manner. He exhibits the fruit of the Spirit -- love, joy, peace, patience, kindness, goodness, faithfulness, gentleness, and self-control.

That’s why the youth pastor gets our highest Movie Churches rating of Four Steeples.