Stand By Your Preacher Man 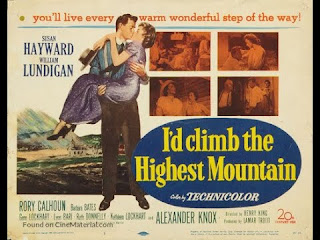 Most job interviews exclude questions about marital status, at least from employers seeking to avoid lawsuits, but churches interviewing prospective pastors are a different matter. It isn’t uncommon for search committees to ask single candidates about their matrimonial intentions. Spouses quite often are a part of the candidating process. While considering a candidate, committees and congregations usually scrutinize the spouse and consider them in their decision.

The scrutiny doesn’t end when a pastor is hired. The spouse and children of a pastor more often than not continue to be under the microscope throughout years of ministry. I've known co-workers for years in secular jobs without meeting their spouse, but some churches come right out and say that the pastor’s husband or wife better be in the front row every Sunday. 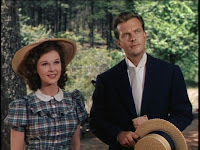 While watching 1951’s I’d Climb the Highest Mountain, I realized that in the years (and years) of writing this blog about clergy, I've never specifically written about clergy spouses.
It’s about time.

This film is based on A Circuit Rider's Wife, an autobiographical novel by Corra Mae Harris, though it’s a much happier story on the screen than it was in real life. Corra had a troubled marriage with Rev. Lundy Harris, who was eventually forced to confess his adulterous sins publicly. The marriage in the film is much happier.

Susan Hayward plays Mary Elizabeth Eden Thompson, the new bride of the Methodist Reverend William Asbury Thomson (William Lundigan). The Reverend has been serving in a small town in the Appalachian Mountains of Georgia. The locals love their preacher and happily welcome his new wife, but she's a city girl who will need to learn to adjust to country life.

As they arrive at their home, her husband says, “I hope you can make good biscuits.” She admits she really doesn’t know how to cook, and that she'd lied about that. He tells her he knew she was lying, which makes her rather cross, “I’m an old hand at dealing with liars here, but don’t worry, we ministers have stomachs like goats.” They kiss and make up.

The Rev. Thompson does have his faults. He races his carriage with one of the town toughs and makes a bet on the race -- but the stakes are holy, “I want to see you in church Sunday, in the Amen corner.” The preacher wins the race and the bet.

Mary’s great trial comes when sickness arrives in the parish. The town doctor comes to the Reverend and tells him he’ll have to close the church because the Fever has come and it would be foolish to let so may people gather in one place. And the Reverend agrees (which might have seemed strange to some viewers in 1951 but not at all to viewers in 2022). Eventually, the Reverend offers the church building as a hospital, and the doctor gratefully accepts.

Mary joins the doctor and her husband in caring for the patients that grow in numbers. When the Reverend tells a grieving lover that his sick girlfriend will live, “The Lord’s not going to let Jennie die. I don’t know how I know, but I know.”

It’s all too much for Mary, “I wish I were dead. Jennie is going to die like the rest of them. I’m not fitted for this sort of life. I don’t pretend to understand your God, I never did and never will.”

Now this talk of “your God” makes me wonder if William and Mary ever talked about faith in their apparently brief courtship. It's helpful for a minister if their spouse shares their faith, especially with the Apostle Paul’s talk in 2 Corinthians 6 about “unequally yoked” partnerships (not a fan of mixed marriages, the man from Tarsus).

Preacher William tells his wife, “I don't think God would fail me in a time like this. You accepted this life of your own free will. If I let you run away, you’ll never forgive yourself.”
Personally, I think the doctor is a little more persuasive, when he tells her, “It’s too late to give up now. The worst of it is over. Jennie’s fever is broken; she’ll be alright. The Lord’s done His part.”

So Mary assures us in a voiceover that she did stick around, “In spite of my weakness.” And the couple continues to work together in the church for the community, sponsoring projects like a Sunday School picnic (with only one fatality) and Christmas gifts for all the children in the community. 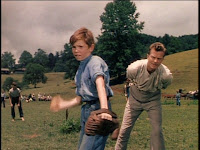 Mary comes to accept her role as the wife of a pastor, even quoting from Ruth, “For where you go, I will go, and where you lodge, I will lodge, your people shall be my people, and your God, my God.” (Doesn’t seem like many people remember that Ruth wasn’t saying that to her husband, but to her mother-in-law, but no need to get into that here.)

After three years of service, Rev. William is called away from the community (that’s how the Methodists rolled). He tells his congregation, “We’ve been together 3 years, you are the closest of friends, but according to the rules of our church we must move on.” And Mary seems happy to go where he goes. (The film doesn’t do badly in the matter of church polity, perhaps because, as we are told in the credits, they had a “Technical Advisor,” the Rev. Wallace. Rogers, D.D.)

Since this is the first Movie Churches Steeple rating for a pastor’s spouse, we will give a generous Four Steeples to Mary Thompson.

(This film is currently available on YouTube.)
Posted by churchandstates at 4:44 PM