I have some news to share that might be difficult for you all to take, but I think it's best to come straight out with it. Rip off the bandaid, if you will.

At the end of 2022, we plan to end this blog; Movie Churches will be finished.

I know this is difficult for many of you to take, especially when you consider some of the great films with interesting takes on churches and clergy that haven’t been covered. Even though we might get around to writing about these films as they deserve, maybe, just in case, it's better for you to explore them for yourselves.

Our gift to you today is these three underappreciated classics that feature church and/or clergy. Since they're from several different genres, you should find one to your liking. 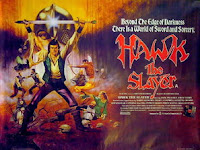 Perhaps you’re a fan of fantasy. You delighted in the humor and romance of The Princess Bride or the passion and magic of Ladyhawke or the grandeur, majesty, and heart of The Lord of the Rings trilogy.

1980’s Hawk the Slayer is all those films rolled into one. It tells the story of warring brothers fighting for possession of a magic sword and stars the great screen legend Jack Palance (the villain in the Western classic Shane and Oscar winner for the Western comedy City Slickers). This film would be featured in Movie Churches because of the convent with kind nuns who care for the sick and wounded. In addition, the Abbot of the Fort of Danesford directs the heroes to the title character, Hawk. Seek out this fascinating parable of faith -- but to really appreciate it, watch it with the scholarly commentary track from the Regents Institute of Fine Films (RIFF). 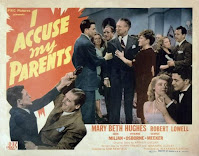 Perhaps you have a taste for searing family drama like the literate melodrama of Kramer Vs. Kramer or the heart-searing family pain of Ordinary People or the complex perversity of The Ice Storm. Even those great films won’t prepare you for 1944’s I Accuse My Parents, the story of a juvenile delinquent, James “Jimmy” Wilson (Robert Lowell), and the dark road that ended in court charged with murder. In this harrowing tale, there is a moment of hope when a kindly owner of a roadside diner offers to take Jimmy in, but tells him, “There’s one condition. You have to go with me to church on Sunday mornings. I’m an usher and it wouldn’t look good if the guy I’ve got living with me doesn’t go to church.” That moment alone would have qualified this film for a Movie Churches review.

If you love the silent mystery of Stanley Kubrick’s 2001: A Space Odyssey or the complex meditation on humanity that is Ridley Scott’s Blade Runner or the fun adventure of Star Wars, you might want to track down 1997’s Future War. I’m recommending this thoughtful meditation on a future where a slave from a more distant future returns to the past to free his people but first battles cyborgs and dinosaurs. This would have been a candidate for Movie Churches because of the aid he receives from a novice, Sister Ann (Travis Brooks Stewart), who's considering taking vows after life as a prostitute and drug dealer.

Again, it might help your appreciation of these two films if you seek out the commentary of the widely respected Motion Picture Symposium of Theatrics (MST, reference #3000).

One of our great regrets at Movie Churches is that we have never been able to write about any of the works of the master film auteur, Edward Davis Wood. This is because he never made any films explicitly about churches or clergy even though he made films about the gritty issues of faith, war, truth, fate, and even resurrection (in the form of zombies). 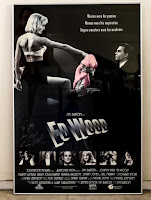 His masterwork, Plan Nine From Outer Space, was made with the help of a church, as we learn in a docudrama about the writer/director’s life, Ed Wood. In Tim Burton’s 1994 film, we learn that Wood received financing for his film about grave robbers from outer space from a Baptist church after telling them he wanted to make uplifting films about the lives of the Apostles, once they'd made money through science fiction genre films. All Wood had to do to secure the financing was to have his entire cast and crew baptized in the church.

We really can’t write about these films in full, so you’ll have to seek them out for yourself. I just hope before the year is done we’ll find time to write about some of the real classics, such as The Exorcist II: The Heretic and God’s Not Dead: Part IV We the People. 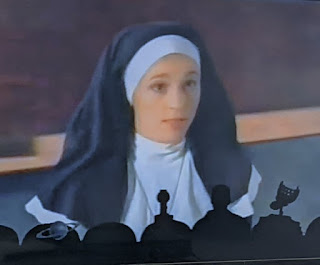 Sister Ann From Future War
Posted by churchandstates at 5:52 AM