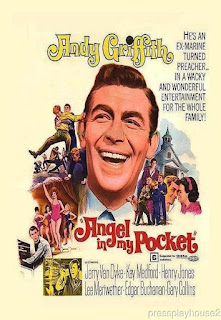 Angel in My Pocket (1969)
Most people I know don’t particularly enjoy looking for a job. Usually, the search involves quite a process of paperwork and interviews and negotiations. It's frustrating!
Things are much simpler in the world of the 1969 film Angel in My Pocket. (FWIW, the title of the film is never referenced or explained.) Andy Griffith, a recent seminary graduate ordained as a pastor in an uncertain denomination, gets a knock on his door and finds a representative from his diocese there to inform him that he has been called to a church in a different state.
So Rev. Samuel Whitehead quits his job as a bricklayer, packs up his pregnant wife (Lee Meriwether looking remarkably plain), three school-aged children, mother-in-law, and shiftless brother-in-law (Jerry Van Dyke) to move into a church, Church of the Redeemer, and a parsonage -- sight unseen.

Sure, this film takes place before the internet, but the Rev. Andy does absolutely no research about the church or the town where he's going to serve. He makes no effort to telephone the Bishop of his Diocese to find out the history of the church or why they are looking for a pastor at this particular time. He doesn’t go to the local library to find information about the town of Wood Falls, Kansas. (I tried looking up said city and found it does not exist. Surely their AAA TripTik would have warned them about this. They didn't even get a good map). 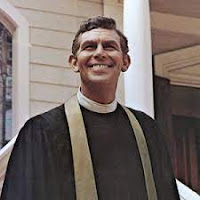 The Reverend exhibits no curiosity about something most of us think of when considering a new job or position: pay. The film goes to great lengths to avoid naming a specific denomination, but denominations with a bishop who assigns pastors to congregations have a fairly high level of bureaucracy. And with that bureaucracy usually comes rules and regulations about salary and vacation and medical care and educational leave, but the Reverend Whitehead goes to this church without a notion of what he will be paid.

The congregation seems to have the same lack of curiosity about their new pastor. The church caretaker, Calvin Grey (Parker Fennelly), greets the pastor and family on their arrival. (Rev. Andy asks Grey if he’s lived in Wood Falls all his life. “Not yet,” is the response. But the man has a distinct New England accent, rather than a midwest, accent. He sounds like the Stage Manager in Our Town) The new minister and his family arrive on Saturday, the night before the Reverend’s first worship service and sermon.

This is strange for several reasons. For instance, the church sign reads "Sunday School at 9:30 am Morning service at 11 am." One would think, at least on that first Sunday, the Reverend would be a part of the Sunday School time -- at least stop in and say “Hello” -- but he doesn’t. And his wife and children apparently don’t either.

Even as the service begins, the Reverend hides in the back as the choir sings (“Holy, Holy, Holy”) the opening hymn. He puts on his robes as the caretaker tells him, “You better get out there, they’re running out of verses.”) This seems to be a worship service that consists entirely of two parts: hymns and the sermon. Most worship services have quite a few other elements that don’t seem to be a part of the services at Church of the Redeemer in Wood Falls: a call to worship or welcome, some announcements, Bible reading, collection of offerings -- and some awkward transitions between these elements. But not in Wood Falls, where it's just hymns and sermon. Though the robes and bishops and diocese all seem like High Church trappings, the Lord’s Supper (communion, eucharist, the High Sacrament) which is a part of every Sunday worship service in most any high church service is never celebrated here.

Rev. Whitehead had no idea what he would be preaching until the night before the service. He runs through possibilities like “Love Your Neighbor,” “Brother’s Keeper,” “Good Samaritan” until he remembers that he saw men engaged in a political brawl in the town square. So he decides to preach a sermon “Against Violence.” This is a fine sermon topic, though a Christian preacher usually finds a Bible verse or passage to go with his topic. Rev. Sam doesn’t seem to consider it a high priority.

The Reverend then does what preachers do in movies (and occasionally in real life): he waits outside the church door to shake hands as people leave, and they tell him what a fine sermon it was (“Fine sermon, it was short,” one man says.) As the people leave, a man comes to tell the Reverend that he'll be meeting the “Board of Governors.” (This phrase is an odd one for church leadership, though it's rather a common term in connection to private schools) Even stranger, at this meeting, immediately following the pastor’s first worship service, on that Sunday afternoon, they negotiate the pastor’s pay (which the board seeks to make as low as possible).

At this meeting, we also learn that for years the church has been divided into two rival factions represented by two families: the Greshems and the Sinclairs. These same two families have fought to control the mayor’s office and city council for decades.
I really consider this a miracle. I've known churches that split over the color of the carpeting. If these people have managed to stay together in one church (and on one church governing board) for all these years, that’s a rather amazing thing.

This board is also exceptionally cheap. The previous pastor left because the church wouldn’t buy a new boiler (heating unit) A member of the board says, “We’ve had the same boiler for decades and no one has ever complained before.” They also won’t buy a new organ (the organ in place on that first Sunday is so out of tune that it's impossible to play a tune), so the pastor finds a creative solution. He hears of a burlesque house in another city that has an organ they are no longer using. He goes to the theater to buy it, and he's seen by women from the church, causing a mini-scandal.
I’m afraid I’m going to have to take a little detour away from the church to the burlesque theater. When Rev. Sam visits the theater, a rehearsal is going on and the women are working on a show featuring "Beauties from around the World." The women are all wearing costumes that look like bathing suits with the flags of countries around the world. These costumes are not really any skimpier or more suggestive than the costumes on your average Bob Hope TV Special of the time -- and this is at the time when grindhouses were showing nudie flicks and art houses were screening I Am Curious (Yellow). End detour. 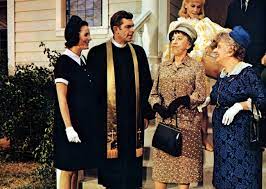 It seems The Church of the Redeemer has gone through seven pastors in the previous ten years, so one would think the Bishop of the Diocese would realize that the church would be trouble for the new pastor, but when the Board writes a complaining letter to the Bishop, he fires the Rev. Whitehead with no due process whatsoever. This isn’t how denominations do things, but since the denomination is never made clear, it’s all okay I guess.

But then the people in the church decide they want to bring Whitehead back, and they don’t need to go through the Bishop at all this time.

SO if you want to learn anything about how churches work in the real world (or what burlesque theaters were like in the 1960’s), don’t watch this film. BUT, if you would like to see a film with the comic sensibilities of a sitcom of the 1960s with many of the sitcom stars of the time (Uncle Joe from Petticoat Junction, Howard Sprague from Mayberry R.F.D, Mom Peepers from Mister Peepers, along with the actual Wicked Witch of the West from The Wizard of Oz.) 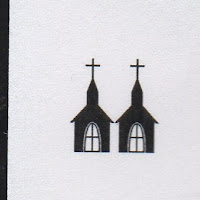 So what's the Movie Churches Steeple Ratings for An Angel in My Pocket? The Rev. Sam gets 3 Steeples and the Church of the Redeemer gets one for an average of Two Steeples.
Posted by churchandstates at 5:04 PM