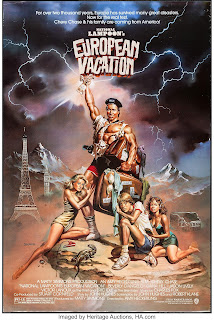 With travel bans finally lifted, this month Movie Churches will be taking some European Vacations. On Friday, we'll begin our tour with a stop in Ireland, but before we do that, it seemed like a good time to look back at ten favorite posts about films set in Europe that also had decent Movie Churches clergy ratings. (This excluded some great films such as A Hidden Life and Winter Light that feature less than exemplary ministers and ministries.)
First stop is England for the film #10, The Wolf Man (1941). You might not even remember the church from this classic Universal Studios monster movie, but it was there, as was a minister. They're a worthy contrast to the dark forces at work in the British countryside.

For #9 we head to Spain for a strange little myth about a boy bequeathed to a monastery. From a certain perspective, The Miracle of Marcelino (1955), which seems quite cheerful on the surface, is rather dark. But there are some very fine monks to be found.

Back to England again for #8. I guess we just like not having to deal with translation issues or paying attention to subtitles. This film is certainly a contender for one of the most fun films of all time, what with  adventure right there in the title. The Adventures of Robin Hood (1938) has a fine representative of the church in the person of Friar Tuck.

On to Denmark for #7, Ordet from the great director, Carl Theodor Dreyer. One could argue that there is a Jesus cameo in this classic -- you can't beat our Great High Priest as good clergy.

Germany is the spot for #6 with one of the most important historical figures -- though not everyone is a fan. But we at Movie Churches are great admirers of Martin Luther and the best film about him is called, simply, Luther (2003).

You didn’t think we’d skip Italy, did you? We wouldn't dream of it, any more than we’d pass by Saint Francis of Assisi. There have been many films about this fascinating man, but today we choose Franco Zeffirelli's Brother Sun, Sister Moon (1972) for our #5 film.

Of course, for film #4, we need to spend some time in France in one of the world’s great cities -- Paris -- for The Legend of the Holy Drinker (1988), starring the great Rutger Hauer.

Our final stop in England is for film #3 for The Detective (1954), a film starring the great Sir Alec Guinness. The film is based on stories by one of my favorite writers, G. K. Chesterton.

We return to Italy, at the time of the Second World War, for Roberto Rossellini’s Paisan (1946) for film #2.

Finally, we go back to France again for our #1 Movie Church set in Europe, Leon Morin, Priest.

Posted by churchandstates at 3:19 PM